"I Would Say It Was Some Hybrid Creature Between, a Mix Between a Polar Bear, Arctic Wolf, An Ape and Some Big Cat" [Bigfoot Sightings] 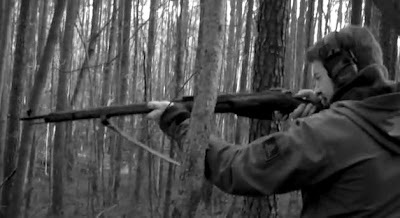 It´s 1995 I'm way north in the upper peninsula Michigan, just at the border on the east near Canada. During this time I was training to be a Marine so my interest were heavily into guns, gadgets, martial arts, and fitness, that kind of thing.

We had set up camp (my grandpa, one of my uncles, his two boys, and four family friends).

There was also another group close-by that we had met up with (two other families, good people we knew from another hunt).

We started a fire to cook, we had fished earlier and did well, keep in mind that even though my grandpa and his son are both retired Marines we are using a lot of crap, like depth finders, all this tracking and scanning crap.

Johnny my cousin had a pair of night vision goggles. I was carrying a H&K 36 and a H&K Socom USP (way overkill for deer and maybe even illegal).

But we were really role playing for a combat and situation decision training.

Simulating a new strategy for tactical team work with the sniper (me) calling the shots instead of the lead rifle-man. Turning a five man crew into three teams (it was supposed to be six but James was to tired).

Now it's like 3 to 4 am, just my cousins (Jason, EC) and my ROTC classmates (Andrew, Tommy) and me, in 4ft of snow and an almost full moon, it was like daylight.

Finally we come to a beautiful clearing. It was kind of breath taking and took longer than normal to take it all in, a sparkling flowing stream, moonlit lake, several deer with big points too, a slight wind making everything seem like it's breathing. You could just slightly here a water-fall, not a big one though in the distance.

We had a perfect vantage point, elevated, dry, and unseen. I was looking at this big ass deer, big ass antlers, thinking to myself “I'm gonna go for the heart”, waiting for Jason to say “I'm clear”.

Behind the group of dear were a bunch of trees and not a lot of brush, you could see rows and rows of trees behind for a few yards. I saw something move in between the trees, something big, but I could not make it out with my rifle sight (I said earlier it was a H&K ) so I pulled out my snipe to get a better view, a PSG1.

In my head I'm thinking “OK we got a mountain lion or big cat to deal with, or wolf maybe”,

I definitely would not want to shoot something like that.

I slide up a little more to get a better view, I get up under this huge pine tree, it was awesome, a huge open space under the tree, a place to put my pack down, get comfortable all without being seen..

I wanted it to be silent but everything was moving and breathing, chirping, you know it was really weird, just when stuff settled down a damn bat would fly by or something.

I just had to keep my eyes moving all the time.

So I'm up almost eye level with the trees, looking down at this large group of deer, more than a dozen, too many to see in the sight at the same time.

I send Jason and EC to the east, Drew and Tommy to the west, behind me is lake Superior, right where the two Great Lakes meet.

Any shot I take is extra deadly at this angle and I never miss on the first shot for whatever reason.

I decide to take out the big guy I mentioned earlier.

There I sat waiting for them to give me the OK to shoot, I didn't know what was behind them and I was not going to shoot into the woods, or who knows where else in case of a miss.

A little time passes then Jason replies "Yea all good, just having some trouble navigating"

Drew replies “Yep, in position, your clear, take your shot".

So I'm sitting there, I radio J again "All right J let me know".

I´m stuck on this huge deer, feeling so exited, because to be honest I don´t know shit about deer hunting, but I know Pa is going to flip out when we drag this thing in.

All of sudden every last deer out there looks up to the immediate right all at once. I also turned, scanning almost full circle, seeing nothing, looking back at them, by then some had started to head away, slowly though, with some still looking in that direction.

I radio to Drew "You see what they're looking at?"

Drew replies "I was gonna ask you the same thing, what´s up with the shot?"

I reply "Waiting on J still"

I get back in on the thing I saw moving previously, nothing is happening at first I'm just scanning back and forth.

J finally radios in “They are in position and the deer are walking directly towards them, about 60 yards away”.

Then IT moves again, I zoom in tight on this big animal, in a low part of a very big, branching tree. The tree is covered in snow and this thing is stark white, I still could n´t even fix my eyes right to figure out what the hell the thing was so I just watching, eyes peeled.

I radio out "CAN ANYONE SEE TANGO BEHIND ROCKY IN THE MAIN TREE????" (Rocky is our code for target/ Tango is the enemy) Not yelling, but very direct and obvious.

So I am targeting this thing, but can't make it out, it was just like a big piece of white snow that crawled for second.

I AM TRIPPING NOW...then a stupid bird flutters and lands and I am like “Fuck off, out of the way!!”

I radio "Did anyone fucking see THAT????"

Their response "What, the bird?"

Then this BIG ASS THING, launches off the branch, lands heels first in the snow and charges at the last few deer that was left, they did not even have time to move.

Meanwhile on the radio someone was attempting to say the scientific name for the bird, someone saying really fast instructions and orders. Then Tommy (we call him general) saying "EC get on the phone, everyone mark your areas, Andrew double back to camp, Billy shot is yours"

Every voice jittery and out of breathe, (obviously running) with me wondering, "Does anyone know, what the fuck that is, what is it, what is it?"

Over the radio, "Polar bear",

"That's not a fucking polar bear",

"Some kind of gorilla",

I thought to myself that it must be some hybrid creature up here in the cold and I'd never seen anything like it, believe me I know my animals and my science.

I take my shot but it does not even make the creature flinch...then another and it turns and runs.

That was no Polar Bear!

Here is my best description..

At first it landed, you could tell that it could probably stand up, it stooped down quick and began to run kind of like a cat, I could not make out if it was running with it's fist or fingers, it was weird.

It had these crazy ridges all over it's body, really small (like a reptile maybe?).

Fur like a Pit bull has, a little thicker though, all white but you could still see black skin on the face and belly. It looked like a black or Asian man (because of the face), with a white gorilla suit on, a muscle suit on under that too.

I know it sounds crazy but today I would say it was some hybrid creature between, a mix between a Polar bear, Arctic Wolf, An Ape and some Big Cat, looking 7 foot tall, maybe more.

It was very light on it's feet, had super-strength, angry as fuck for no good reason, and almost bulletproof!

As soon as I figured it was long gone, I radioed the others, we grouped, all of us were silent, unsure of what had just happened. As we got to camp we just exploded, all these questions flying around at one another.

We did not know what we´d seen, but we knew we would not want to see it again.

To this day all I can say is “We saw the Abominable Snowman”.