Is Bigfoot a Protected Species?

Is Bigfoot a Protected Species?

Left: Eastern US type of Bigfoot.


Is Bigfoot a protected species? Well, in New York, an enthusiast has stated to the press that the species is on the protected species list.
The rationale behind this declaration is that the mysterious beast has no designated hunting season; therefore, by law, the species falls under the protected list.
According to the Huffington Post, enthusiast, Peter Wiemer, has verified this with the New York State Department of Environmental Conservation (DEC) in a telephone conversation.
Of course, the DEC has denied that this declaration is true, and the department also denies the existence of the beast. However, in an email, the DEC told Wiemer that there is no open season on the beast, but none may be taken either.
The DEC also encourages believers to track down the beast in order to prove that it exists. However, shooting it is still not legal.

The only state that allows for Sasquatches to get shot is Texas. The law allows shooter to do it on first site with no questions asked. Go figure!
If the beast is not real, or is it, why would there be laws for it? Is it just in case it really does exist? Also, why aren't there any specialized hunters to track these beasts?
Hunting networks should really have a specialized team to track these guys down. The History Channel has a show called "Finding Bigfoot."The ending of each episode always ends the same with no real proof of a Sasquatch.
If they were a hoax, why do they have stories of these wild beasts around the northern hemisphere of our fantastic mysterious world? Ever wonder? So far, that is the best this world can do, wonder.
Photo: Flickr/Bob Doran

--This is a situation which should have been cleared up at first posting and which journalists continue to misquote. THE LAW IN TEXAS IS THE SAME AS ANYWHERE ELSE, BIGFOOT IS AUTOMATICALLY UNDER LEGAL  PROTECTION. IN ORDER TO SHOOT A BIGFOOT IN TEXAS YOU MUST FIRST ACQUIRE A BIGFOOT HUNTING LICENSE AND A PERMIT TO SHOOT ONE (1) UNDER THE TERMS AS STATED BEFOREHAND. YOU CANNOT SHOOT JUST ANYTHING IN TEXAS YOU THINK IS A BIGFOOT. THE MAN WHO ORIGINALLY SAID YOU COULD SHOOT BIGFOOT IN TEXAS WAS MISQUOTING THE LAW AND WAS CORRECTED ALMOST IMMEDIATELY BY BEING TOLD THE LAW WAS BASICALLY THE SAME AS EVERYWHERE ELSE.
Associated News Item:
http://bigfootevidence.blogspot.com/2012/10/texas-sasquatch-hunting-permit-texas.html/
Bigfoot Evidence prints what is alleged to be a Texas Bigfoot hunting permit for sale on ebay: 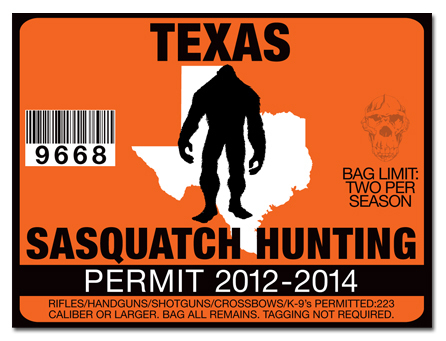 According to John Lloyd Scharf's email exchange last May with Texas Wildlife chief of staff, Lt. David Sinclair, "non-protected, nongame animal may be hunted on private property with landowner consent by any means".

Even though Sinclair didn't mention Bigfoot at all in his email, some people took the "straight description of the law" literally, and believed that it was legal to hunt Bigfoot. After he publicly cleared up Sharf's misinterpretation of the law in a FoxNews.com article, Bigfoot was safe again... until now.

On Ebay, a hunting permit sticker is currently selling for $3.97 and it has the description, "SASQUATCH HUNTING PERMIT TEXAS 2012-2014". So far, one has been sold, and there's 3 left in stock. The sticker is about 4" wide x 3" tall, and it's made from the highest quality vinyl.

Guess what? This is not a legal document, it counts as a forgery. Attempt to use it in your defense should you shoot a Bigfoot in Texas and you will STILL be in violation of the law, you shall be subject to a fine and/or imprisonment as determined by the judge. I have been informed that the state of Texas does not and will not issue actual legal permits to hunt Bigfoot and the stickers are a scam.