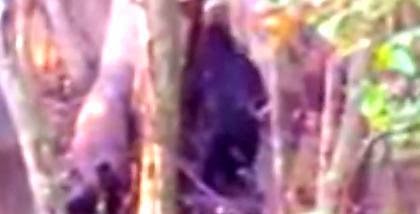 Here's the breakdown you've been waiting for on the recent Mississippi skunk ape sighting filmed by hunter Josh Highcliff. Parabreakdown throws down some excellent questions, such as: Why didn't the person use the camera to zoom in? Why did he choose to run at the end? Or Why does the "skunk ape" look like a man in a costume? (Because it is?) One thing we know for sure is that this is definitely not a bear

Here is the commentary from a Facebook Bigfoot Discussion Group:

This is probably one of the best skunk ape footage we've ever seen. This video was filmed by Josh Highcliff, and if it's a prank, his name is attached to it forever. The background story is very convincing:

Here is exactly what I seen, I'm not sure what it is but can someone please tell me? Is there a person who can do video analyses or something? I got scared and ran away, i wish i stayed to keep taking the movie.

Date: october 24 - 2013 Where: about 9 miles west of Tunica, Mississippi on my hunting property Time: about 6pm

I was out hunting hogs, just sitting in a part of the swamp i have heard em before...it is not too far from a road. I was wearing hunting camo and just sitting dead still waiting for it to get dark, cause thats when the hogs come out. I hear a noise behind the tree i was sitting on, i thought it was the hogs, when i got around i could not believe my own two eyes.

There was this huge black thing crouched by a dead cypress about 50 yards away, i thought it was a hog but saw these big shoulders and a head upright with hands. It looked like it was digging out the stump. My first instinct was to run, i did not even think of shooting...then i know no one will believe me...it was like everything slowed down...i was scared! I took out my iphone and started videotaping it..i guess i pushed the record button twice cause it stopped blinking red.. but i pushed it again. I hear a truck driving down the road and the thing stood up!! I was trying to be dead quiet...when it stood up i could not control myself and ran. That stump was huge and i'd guess the sucker was 7feet tall, i am a hunter and am pretty darn good at guessing size.

I don't know what to think.. if someone can tell me what it is or if somone was trying to prank me i, I don't want to go back on my land. this is the first movie i have ever put on youtube..the video looks better on my phone and computer

I always heard stories of skunk ape and honey island swamp monster from these parts but never thought about it being real ever.

has anyone seen anything like this in mississippi?
Posted by Anonymous at 21:42