[At the Phantoms and Monsters site: I actually was involved partly in the breaking of this story some years back, before it was generally known, through my contacts in the Native community... DD] 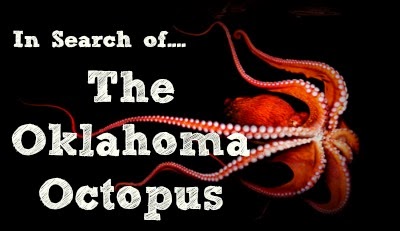 The mysterious Oklahoma Octopus is supposedly a huge freshwater cephalopod-like creature generally said to inhabit at least two lakes in Oklahoma (Lake Thunderbird and Lake Tenkiller...there is some mention of Lake Oolagah as well) where it attacks and kills unsuspecting swimmers. According to legend and rumor, this freshwater monster measures the size of a horse and resembles a marine octopus, with long tentacles and leathery, reddish-brown skin.

Is it conceivable that a saltwater creature could survive in freshwater lakes? The Giant Pacific Octopus, for example, has tentacles with the strength of a 200-pound man and a powerful beak that it uses to kill prey.

Although no physical evidence exists in the case of the Oklahoma Octopus, many point to the high mortality rate and large number of unexplained drownings in the lakes as a clear sign of its presence. There have also been numerous reported sightings. Cryptozoologists have pointed out that species of jellyfish have been able to adapt from saltwater to freshwater conditions, and the same adaptation may have been possible for a giant cephalopod trapped in an inland lake when coastal waters receded.

There is an established story that three teenagers, Tyler Shuman, Ruthie Simple and Bruce DelRoy were reported to have drown, pulled down by the creature. The newspaper reports also apparently said the two other teenagers with them had blister like wounds and scabs, like the marks caused by Octopus suckers. The only problem is that I have seen a copy of an actual newspaper account published anywhere.

The tales goes back to the Native Americans of eastern Oklahoma (especially the Caddo Empire), who told legends of a large creature that looked somewhat like a leech and ate men alive...even the lake were man-made in the mid-20th century. The stories go on to say that the ponds were linked underground so the tentacle creature would lurk just beneath the surface waiting for prey to come for a drink. It would then drag them to their deaths. When the lakes were made, the creatures moved in, but still lurked in the old springs that lead to the lake bottom. This seems a bit far-fetched IMO.

According to Monster Spotter's Guide to North America

dive shop operator Tim Knight, owner of Nautical Advertures in nearby Cookson, says that any reported giant octopus sighting can’t be a case of mistaken identity from a chance jellyfish encounter, because the size disparity between the two aquatic creatures is simply too great. "The jellyfish we have are very small, and an octopus has to have eight tentacles.” he said. "The largest jellyfish I’ve seen was maybe the size of a golf ball.” Yes...there are freshwater jellyfish in Oklahoma.

Beau Fairchild, the lead coldwater biologist at the Oklahoma Aquarium in Jenks says that octopus may have been 'confused' at some point.

“That’s very possible, yeah. It could happen.” said Fairchild, who is in charge of taking care of the aquarium’s giant Pacific octopus. “Something like that is very feasible, as far as going upriver like that, but I don’t know how long an octopus could go upriver and be breathing and taking in freshwater before it would die. I don’t know what kind of limit it has, exactly.” Though living day to day in freshwater instead of saltwater, Fairchild contends, is “physiologically impossible."

Like most legends, something was mostly likely seen and reported to be an anomalous creature. The last reported sighting was in 2009. Maybe the beast will make an appearence in the not-so-distant future.

[My conclusion and an opinion shared by several others was that the creature at the bottom of these stories was more likely a giant catfish, the whiskers being described as tentacles-DD]
Posted by Anonymous at 02:23