This website is an artistic project made as a response to the new book "Cryptozoologicon Volume 1.

The e-book is available here for a modest price:
http://www.amazon.com/Cryptozoologicon-Volume-I-Darren-Naish-ebook/dp/B00GDF7OAK

The book approaches the study of mystery creatures as a skeptical matter, for the most part refuting their existence. But as a part of the book, they also approach cryptozoology as speculative fiction, using the hypotheses of various cryptozoologists as inspiration, and also providing their own. All the while, the book is provided with lavish illustrations, to accompany their speculation.

The book contains 28 case studies of cryptids, each with a skeptical text about the sightings and context, some speculative writing about the hypothetical nature of each beast, and a color illustration. In the next 28 entries, I will mimic this style, using my own text and drawings of different cryptids.

All artwork and text contained in this website is by Timothy Donald Morris, this work is produced by me for artistic purposes, and belongs to me.
I can recognize that Tim has been following this blog and has taken some hints from it, while maintaining his own line of independant speculation.  At this particular juncture, I am interested in some of his information about some freshwater cryptids of North America (His section on Merfolk comes to parallel speculations about aquatic macaque monkeys to the speculations made by Tyler Stone and by me, but basically assorted differently)
Cameron McCormick once spoke derisively about the category of "Faux-alligators" on this blog. There is nothing particularly mysterious or even peculiar abut my use of the general label, it means creatures that are commonly described as alligators when they are obviously not alligators. There are two main sorts, one a giant salamander and the other a large iguanid lizard. Tim Morris gives an example of each sort in this site:

Time: Allegedly sighted in 1900, 1915 and 1973, other sightings collected in 1998. Numerous other sightings, and supposed links to Native American folklore.

Various sightings in British Columbia and surrounding areas describe large, lizard-like aquatic creatures dwelling in ponds and lakes. The first uncovered sighting was Warren Scott, who allegedly found a “lost valley” where black “alligators” with horns apparently lived. Another supporter of his “alligator story” supposedly caught some young individuals, and dissected them, making drawings of the anatomy. Many other interesting sightings involve black “lizards” or “alligators” in this part of Canada, as well as Native American myths and legends. Warren Scott has been revealed to not be a trustworthy source, by other cryptozoologists, so his story may have been fabricated.

This creature sounds decidedly un-alligator-like, it is claimed to have horns, and smooth skin, as well as webbed feet, none of these features are typical of alligators. Cryptozoologists have noted that British Columbia is far too cold for alligators, or any large reptile, and that this creature could be an amphibian. Stories of both lake monsters, and giant reptiles are typical mythic motifs in many parts of the world, so all that these sightings probably amount to is folklore and tall tales. There seems to be no candidate for the real “canadian alligator”, and so it remains yet another obscure, forgotten cryptozoological case, with no resolution in sight.

But what if Warren Scott really did see something? We can speculate that the Canadian “alligator” would be more aptly named the Giant Canadian Waterhound (Meganecturus niger). It is a very large, black-skinned salamander, related to the Mudpuppy and Waterdog; it reaches lengths of up to 10 feet, but grows very slowly. The dark  skin colour allows it to retain heat in the colder climate of its Canadian home, and it possesses external gills, that can be mistaken for horns. This amphibian is able to crawl onto land for periods of time in order to travel between bodies of water, or feed, during these excursions it will retract its gills into a pouch on its neck. They more commonly come ashore when the air is damp or misty, or even during rain. Feeding mainly on fish and crabs, but also taking snakes, insects, and small birds, the Giant Canadian Waterhound usually prefers to inhabit lakes or ponds that are relatively undisturbed, being sensitive to pollution and disturbance by humans. 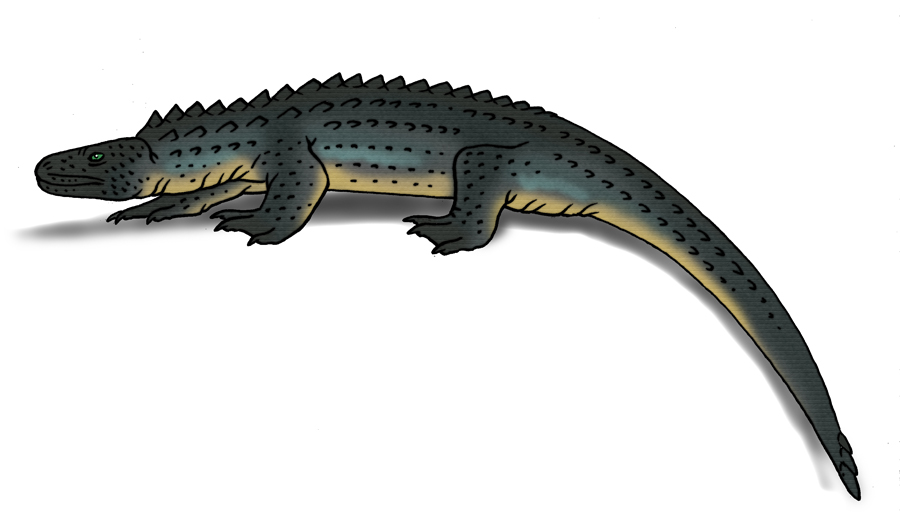 Another kind of fictional monster, is that kind invented by newspapers or magazines to boost sales. One such incident seems to be the shooting of the dragon-like Gowrow on January 31 1897. Supposedly the posse of townsfolk found its lair, a cave that was littered about with human and animal remains. The creature came out of the nearby lake and was eventually shot multiple times, but not before biting off one person’s leg and uprooting trees. Supposedly it was 20 feet long, with tusks, and a row of small horn-spikes down its back. Its tail was long and thin, and ended in a blade-shaped spike. A popular trick was to claim to have captured a Gowrow, charge admission, and then incite panic by claiming that it had escaped, pocketing all the admission without showing the public anything.

Such tall tales abounded in frontier North America, it was customary to fool strangers into believing in these things, as a way of hazing them. As such, the fraudulent newspaper hype, and subsequent sightings should not be taken seriously. It remains unlikely that such a large, draconic reptile could remain undetected in the USA, even if the relatively southern position of Arkansas could not pose too much of a problem for it.

So, if the Gowrow were not all stories and fraud, what would it be like? We suggest that the Gowrow (Arkansaurus cornuderma) be imagined as a giant relative of the Gila monster. A relatively sluggish, but powerful lizard with bony scutes along its back, giving it a somewhat spiky profile, it is claimed to have tusks, but the Gowrow actually has many large fangs, which are usually hidden by the lips and gums. It can give a very serious wounding bite that is also venomous, it can even sever limbs of an unwary assailant, and a secondary defence is its large tail which has a hard, pointed tip. It usually has a fairly small territory, consisting of a deep burrow dug among trees or rocks, and accessible areas of mountainous woodland in which to hunt. It appears to hunt mainly by ambush, laying in wait by commonly used game trails for prey such a deer, raccoons, and rabbits. Like its relatives, it enjoys soaking in water in warmer weather, which has led to the mistaken belief that it is a lake dweller. The relatively temperate weather in the Ozarks means that the Gowrow enters torpor in winter, and emerges in spring. Being almost 20 feet long, it is able to conserve heat fairly well during the rest of the year, but it may be that this reptile has better control of its metabolism than other lizards.


[Although the name "Gowrow" has been connected to what is called "Fakelore", it does seem there is a valid  folk tradition expressing a belief in such dragonlike creatures but using the alternate spelling of "Gowers"]

[In these cases I consider the amphibian "Canadian Alligators" to be more closly related to hellbenders than mudpuppies, and this is the same category as listed by Loren Coleman in his own Field Guide to aquatic cryptids. The spinyback creatures are something we have an ongoing string about on this blog also, and I personally consider them to be iguanids because of the spines on the back as well as other considerations. Many Cryptozoologists believe them to be monitor lizards. The figure of 20 feet long is repeated in South America although I am not so confident to say that the ones in North America can be considered to be as large.-DD]

Sachamama
Tim also includes this drawing interpreting the Sachamama as a giant snakenecked turtle. There is no information posted on this on the site yet but it is an intriguing possibility.
Posted by Anonymous at 15:04