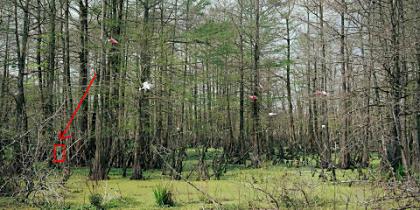 Is there a Bigfoot in this photograph? According to Bigfoot researcher Leroy Blevins, there's definitely something in the swamp -- and it's spear fishing. Blevins has posted a series of images taken from Google Earth of a swamp in Louisiana showing what appears to be a dark figure near the bottom edge of the photograph. He writes:

"As I was looking over images on google earth I came up on this image here taken in Louisiana. This image shows bird in the swamp area however as I looked over this image something caught my eye. There is this creature sitting on a down tree with a stick in it's hands just sitting there like it was spear fishing."

On the page, this last photo was next to the Melissa Hovis (sponsored) photo of the back of a Bigfoot, and I think the two of them are readily comparable:

And of course if this kind of Bigfoot spearfishes using sticks, it is a cultural animal using tools, presumably a man: this has also been alleged elsewhere and these Bigfoots have regularly been reported as using sticks and stones as tools, carrying them around with them, or arranging them as markers I the woods in patterns that are meaningful to them. All of which is well above the simply animalistic level of existence.
Posted by Anonymous at 20:33