Jay Cooney brought this to my attention again and so I thought I would reprint it  with the goal in mind of having a discussion on it afterward; 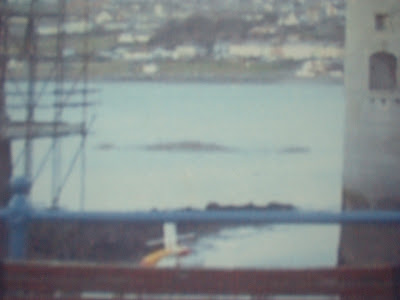 In 2004 Richard Freeman of the CFZ, together with a crew from the Australian Animal X TV show, visited Pembroke Dock in southwest Wales, to follow up stories about a sea monster. Lindsay revisits the case...


Reward out for `Milford Monster' spotted by pub's lunch customers.


It makes you wonder what's in the beer. The lunchtime customers at the small waterfront pub had never seen anything like it.


They were enjoying a quiet drink when suddenly they saw a mysterious serpent-like creature in the water outside. It was dark and snake-like and roughly the length of four to five cars. If it was Nessie she was a long way from home, as the mysterious creature of the deep was spotted in the Milford Haven waterway, just yards away from the busy Irish ferry terminal.


Now the sighting has become the talk of Pembroke Dock and the pub's landlord is offering a £150 reward to anyone who can catch the monster alive. David Crewe of the historic Ship-wright pub, said, "There was definitely something out there.


"It could be anything. I just want to find out what it is." The mysterious creature was spotted first by barmaid Lesley John in the deep channel of the waterway, close to where Irish ferry boats turn around before heading for Pembroke Dock ferry terminal. "I was pulling a pint for one of the lads and I was watching the ferry, you know how it leaves a white trail as it goes?" "Then I saw what looked like a big black fin. I carried on pulling the pint and it was still there. I said to the lads `What the hell is that?' "


The customers went outside to investigate and also saw something strange. "From a distance it appeared to have a snake-like head," said Peter Thomas. "And you could see a commotion in the water, a lot of splashing, about 10 metres away. "It was a rather odd thing. I do a lot of boating on the waterway and I have never seen anything like that. It was something really strange. But you can only say what you saw." By the time Mr Crewe himself was alerted, it had almost disappeared. "All I saw was a tail disappearing into the water," he said. Afterwards the pub rang the local radio station, Radio Pembrokeshire, which aired news of the sighting to the county. It was also picked up by the local paper the Western Telegraph, which splashed it over half-a-page complete with picture. Pembroke Dock's long time county councillor Viv Hay said it was now the talk of the town.

"I haven't seen the Pembroke Dock Loch Ness monster at all but a lot of people are talking about it," he said. "I just wonder what they serve there ."I suppose it was just a fleeting visit, but if it stopped here long enough it could become a tourist attraction." Radio Pembrokeshire managing director Keri Jones said the station had been inundated with phone calls from listeners offering theories about what had been seen and even suggesting names for the monster. And although there have been no other reported sightings, he said, "They really believe what they thought they saw."

There have been many sightings of so-called sea monsters around the coast of Britain, as well as the renowned monster of Loch Ness. One of the most dramatic is regularly seen off the coast of Cornwall, which along with Devon, is a particularly fertile area for sea monsters. The legendary Morgawr, as it is now known, was first sighted in 1975 and has been described as a humped creature with stubby horns and bristles. In the same year a sea monster about 10ft long was seen on Bar-mouth Beach in North Wales, while a 30ft to 40ft monster has also been spotted at Newquay.

There have also been alleged sightings of sea beasts off North Yorkshire, Lincolnshire and the Norfolk and Suffolk coasts. David Saunders, a naturalist for more than 40 years and former director of the Dyfed Wildlife Trust, said he had never heard of such a sighting around the Pembrokeshire coast before. "The nearest thing to this would be a whale or dolphin, but it does not appear to be any of these," he said. "It could have been two things separated by 10 metres." He said that over the years there had been reports of similar creatures throughout the world, and often by reputed sources such as Royal Navy ships, but such sightings were usually made out at sea. But he said that despite all the sightings, no-one had ever come up with any real proof that these mysterious creatures actually existed.


So what happened to the sea serpent? I have been unable to find any more sightings so if anyone has any information, please post. It appears a typical description of a sea serpent but if no one else reported it, it will probably be put down to “beer goggles”.


There was a report in Tim Dinsdale's book The Leviathans about a creature seen in 1967 also off the Welsh coast, so could there be large unknown creature that returns to the Welsh coast regularly? Maybe someone from the area reading this can shed some light on the subject , such as local legends or other sightings.


[I thought the creature was comparable to the "Caddy" filmed recently in Alaska: it is noteworthy that most if not all of all the other local creatures sighted were long-necked and Plesiosaur-shaped-DD]
Posted by Anonymous at 14:43