Frequent commenter and now Co-Blogger Troodon Man has a specific interest in Cryptozoology, the rather specialized area of Troodon sightings (similar to the "Raptors" from Jusassic Park) 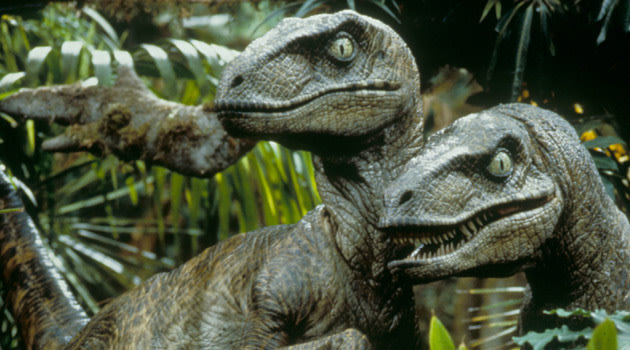 Interested readers are invited to visit his blog below. One specific example he has pointed out is the following report.

This happened to me and my grandpa on a hunting trip in July, 2008. I don't see my grandpa very often, so I always take the chance to take trips with him. Grandpa is pretty much an outdoorsman and enjoys hunting, fishing and just being out in nature.
Grandpa and I were out in the woods. It was around 3 to 3:30 o'clock on Friday the 25th of July. I was 18 at that time. We were on grandpa's land in Georgia. It's a pretty place with the typical Georgia woodland and a few grassy plains. We were walking on a little rocky road heading for a site where grandpa often sees deer. As normal, there were a lot of sounds going on at night in the woods. We ignored most of them and remained quiet to not scare away anything.
Suddenly, we heard an unusual noise we never heard before on our many hunting trips. Grandpa looked at me and listened. Then he raised his finger in front of his mouth to show me that we shouldn't make any more movements. I heard a lot of movement and more of the noise. I can't really describe the sounds, but I sure can describe what I saw, even when it was pretty dark.
We just kept listening to the sounds as suddenly something came walking slowly out of the bushes and onto the road maybe 150 yards in front of us. My eyes got really big, and at that moment I wasn't even scared, just amazed to see this creature. We didn't move. As crazy as it sounds, it looked just like a raptor from the popular Jurassic Park movies.
I just froze because I thought things like that lived many thousands of years ago. It had a long, stiff tail, walked on two feet and had short arms. It looked lizard-like and had a huge claw on both of his feet and smaller claws on his arms. Since the creature appeared to us that it could run fast, we decided to just not move at all. It raised its head in the air and it seemed like it was smelling the air. I estimate its height around 5 feet at the shoulders. After sniffing the air, it made these sounds again and turned around and ran off in the bushes.
Grandpa and I waited until we felt safe again and then quietly made our way back to the truck and drove home. In the truck, we talked to each other about what we had seen and decided to not tell it to grandma because she would think we were crazy.
I never believed in stuff like ghosts and creatures and paranormal stuff, and I still don't believe in ghosts. But since that encounter, I believe in creatures that science doesn't know about. That's my story, as odd as it sounds. I know what I saw.

Associated with this sighting in the string of postings were a couple of others:
http://paranormal.about.com/library/blstory_january06_16.htm

Your True Tales
January 2006 – Page 16
Raptor in Oklahoma
by Bruce
In late June of 2005, I headed south on Highway 169 from my home in eastern Kansas to Tulsa, Oklahoma to attend a youth baseball tournament that my son's team was playing in. My wife had gone on ahead the previous day and I was traveling alone. It was late in the day, a few minutes before sunset on a bright sunny and hot day, and I was just north of Tulsa in a suburb whose name now escapes me.
Suddenly, a strange creature darted across the road directly in front of my pickup and I got a clear look at it (because of the time of day and the nearness of the creature). It looked for all the world like a small dinosaur out of a Hollywood film, perhaps a velociraptor from Jurassic Park or something like that, because it ran upright on the two large back legs, with the smaller, front legs carried close to the torso rather like a human sprinter would do. Its head was tilted back and the mouth slightly open exposing a set of fearsome fangs while the eyes had a wild, fixed expression and were so wide open as to be slightly bug-eyed in appearnance.
It was shockingly fast, and appeared and disappeared in a moment, but not so fast that I didn't get an absolutely clear look at it. It was not a cat, dog, squirrel, fox, possum, raccoon or any other animal that I had ever seen, and I live in the woods and see these more common animals all the time around here. I have seen other references to this kind of animal on the Net, but now recently. What I haven't seen reported elsewhere though, is how absolutely feral and dangerous it looked. I count myself lucky though to have seen it, and hope to see one again.

And some rather less similar reports from Texas and Arkansas, both in regular "Mountain Boomer: territory.

I am keeping an open mind on the matter but so far theses sightings sound pretty much the same as the usual "River Liz/Mini-Rex sort, only some of them are from east of the Mississippi River, which is unusual, and there is a seeming complication in that the more common "Lizard Man" sightings also have a recognizably distinct subtype that has a long tail and looks like a small dinosaur.

As of right now I am considering the matter and alsothe regular Lizardman sightings. Despite Tyler Stone and despite Coleman and Huyghe, I am not so certain the Lizardman sightings fit very easily into the Freshwater Monkeys/Merfolk category either. More work needs to be done.
See Troodon Man's blog:
http://www.mysteriouszoology.blogspot.com/

See Also Raptormania if you have an interest in the topic.
http://albertonykus.blogspot.com/

Incidentally I have always wondered if Charles R Knight's "Laelaps" was actually a Dromeosaurid whose larger foot claw was not recovered and so the relationship was not realized.