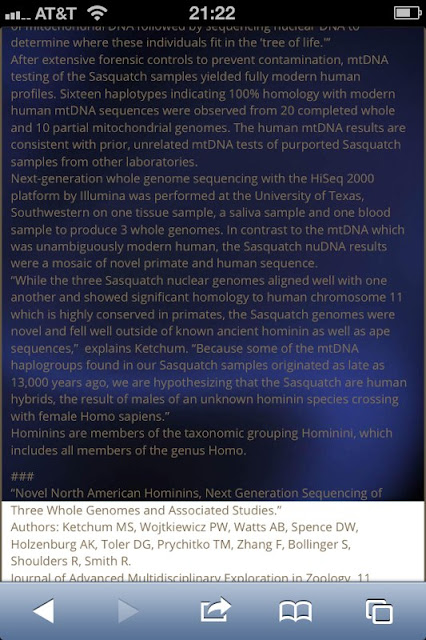 A team of scientists will publish their five-year long study of DNA samples from a novel hominin species, commonly known as “Bigfoot” or “Sasquatch,” on Friday February 15th, 2013. The results suggest that the legendary Sasquatch is extant in North America and is a human relative that arose approximately 13,000 years ago as a hybrid cross of modern Homo sapiens with an novel primate species.

In total, 110 specimens of purported Sasquatch hair, blood, skin, and other tissue types were analyzed for the study. Samples were submitted by individuals and groups at 34 different hominin research sites in 14 U.S. states and two Canadian provinces. Ketchum’s team sequenced 20 whole and 10 partial mitochondrial genomes, as well as 3 whole nuclear genomes, from the samples.

Mitochondrial DNA (mtDNA) comes from mitochondria, energy-producing organelles in the cellular cytoplasm, and is passed down on the maternal lineage across generations. Nuclear DNA (nuDNA) is the genetic information contained in the cell nucleus and is the equal combination of DNA from the parents of an individual.

Initially a skeptic, Ketchum implemented strict protocols to ensure the scientific integrity of the study. DNA samples from submitters and scientists working with study specimens were obtained for use as controls. DNA was extracted from samples using forensic procedures to prevent contamination. examined the morphology of the submitted hair samples against known human and animal samples before beginning . “We soon discovered that certain hair samples--which we would later identify as purported Sasquatch samples--had unique morphology distinguishing them from typical human and animal samples,” says Ketchum. “Those hair samples that could not be identified as known animal or human were subsequently screened using DNA testing, beginning with sequencing of mitochondrial DNA followed by sequencing nuclear DNA to determine where these individuals fit in the ‘tree of life.'”

Next-generation whole genome sequencing with the HiSeq 2000 platform by Illumina was performed at the University of Texas, Southwestern on one tissue sample, a saliva sample and one blood sample to produce 3 whole genomes. In contrast to the mtDNA which was unambiguously modern human, the Sasquatch nuDNA results were a mosaic of novel primate and human sequence.

“While the three Sasquatch nuclear genomes aligned well with one another and showed significant homology to human chromosome 11 which is highly conserved in primates, the Sasquatch genomes were novel and fell well outside of known ancient hominin as well as ape sequences,” explains Ketchum. “Because some of the mtDNA haplogroups found in our Sasquatch samples originated as late as 13,000 years ago, we are hypothesizing that the Sasquatch are human hybrids, the result of males of an unknown hominin species crossing with female Homo sapiens.”

Once again, the technical language of the final report is misleading and the methodology unsound, and it is so in exactly the same way that I explained when the news of this study was first broken.  More than one species is undoubtedly included in the samples, and I still hold that some of the samples are from quite ordinary members of Homo sapiens. Others are non-primate, and an independant team has suggested that some samples come from a black bear. Undoubtedly some such confusion has resulted in the problem with chromosome 11.  The section dealing with the mtDNA in particular is making statements and assumptions which are incorrect and the conclusion drawn as to the mtDNA originating in Europeans 13000 years ago is undoubtedly due to contamination by European (Post-colonial) DNA being included in the sample by contamination. In a specific example, the sample handled by Justin Smeja was contaminated by Smeja's own blood on the sample. That particular conclusion must be removed because of such contamination.

On the other hand I am perfectly happy with the general conclusion that most of the Bigfoot samples from North America come from a type of Homo sapiens. I merely do not accept all of the conclusions drawn from the study because I feel that more than one species is represented in the samples used. I do not wish to state a subspecific name needs to be assigned to it, nor yet do I contend that an exact subspecific name is justified at this point.

Once again, this identification of such creatures as Homo sapiens does mean that anybody killing any individual of this species will be guilty of murder.-DD
Posted by Anonymous at 19:10