The Sturgeon Species of Champ and Nessie

It just so happens that the same species of sturgeon is a candidate to account for sightings of both Champ and the Loch Ness Monster, the New England Sea Serpent of the early 1800s and water monsters along the East Coast such as the Lake Norman Monster and the Altamaha-Ha. It goes without saying that this one kind of fish also cannot possibly account for ALL of the reports in these areas attributed to the local Water Monsters. This is also NOT the same kind of sturgeon that would be involved in sightings in Russia, Siberia, Alaska or Canada.

The sturgeon in question this time has a more exaggeratedly elongated snout and a more exaggeratedly toothed back pofile because the individual plates are larger. Record catches of this species are at 14 feet on both sides of the Atlantic. The Beluga or White sturgeon grows MUCH lasrger than this and allegedly as much as twice as long.

Different populations inhabit areas North and South of this

Florida sturgeon leaping. This one came crashing into a woman on a boat
and broke her leg with the force News Story Here 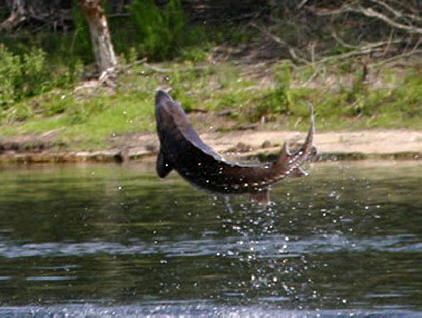 http://frontiersofzoology.blogspot.com/2012/04/massachussets-bay-sturgeon-1819-and-mr.html
Posted by Anonymous at 06:58