I have been asked frequently about what kind of Bigfoot sightings we have locally in Indiana and why I should think of them as anatomically different from the West Coast Sasquatch. Steve Abnet just shared this logo for the Indiana Bigfoot Investigations Society and I thought it was a good representation of what the sightings were like locally. Tess Ballard based it on an impression of several witness' accounts and made it in 2006. When it went up, Penny Goad (of Evansville) added, "Yes, it descibes a lot of witness accounts. I give you my honesty."

It is pretty much the same kind oif Bigfoot as is found in Ohio, Kentucky, Tennessee and the adjoining states. The build is like a really big, burly "Bluto" kind of a man covered all over with fairly long body hair (I have heard that descrption repeatedly). The head is not usually pointed but it is domed, and the head stands up from the shoulder muscles. In younger ones, you can have a distinct impression of a neck. The males can have a distinctive beard and moustache.

This is distinctively the same type of Bigfoot that is illustrated by Forensic Artist Harvery Pratt. The raggedy edge of hairs along the outsides of the arms and legs is another commonly noted feature.

As to its hunting deer, for that we have an independant statement from today's Bigfoot Evidence:
http://bigfootevidence.blogspot.com/2013/04/is-this-squatch-kill.html 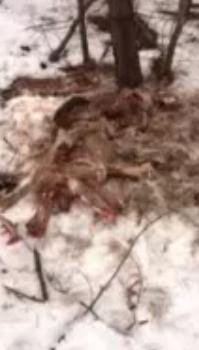 YouTube user "OutdoorAdventuresWI" found this possible Bigfoot kill after tracking footprints in the snow. This deer carcass and the footprints were found on a private property in Neilsville Wisconsin.  Read More
The reports from Wisconsin, Minnesota and Illinois also seem to be distinctly of this same type. I might add that there are several alleged finds of bones and teeth from this type in this part of the Midwest, and they are consistent with the anatomy of fossil humans but of a very large size. DD.