Some postings of Spanish-language reports from a site which gives the English translations: 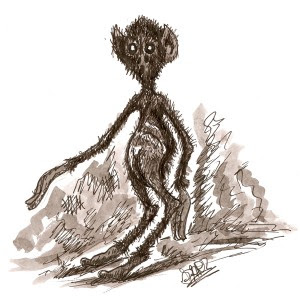 During the course of this week, numerous persons claimed having seen lights in the night skies and unidentified flying objects overhead in broad daylight. The most intriguing fact, however, is the story told by an inspector for the municipal natural resources office, who encountered a strange creature on the premises of the municipal parking lot.

In recent weeks, the department of Victoria has become an unprecedented area for sightings. On a daily basis, residents from various points of the communal lands and the rural areas have described how and why they saw an intense light in the sky, or objects that suddenly vanish as though by magic.

In many of these sightings, people have managed to use their cellphones to take photos. But on Wednesday, the repercussions of these unidentified flying object sightings were minimized by public opinion when an employee of the office of municipal natural resources claimed having seen a strange creature behind the campgrounds as he conducted a routine drive-around.

Faced with this, UFO researcher Silvia Pérez Simondini, startled by the news, stated: "If something was missing in Victoria, it was something that all researchers dream about, and it has just occurred. One always thinks that these things happen to others, in other countries, and that we will never have the possibility of encountering something like what just happened. Now our work is redoubled - we not only have to chase after the lights, appear in this locality year after year. Now we're faced with another type of research."

"On 10 December 2010, while listening to the Caminando program (102.1 FM) I heard my name being mentioned, and they were calling me about something very strange that was taking place. I went to the station immediately, in the understanding that it was just that important. Upon arriving at the station, they told me the story quickly, adding that the percipient was not only credible - he was frightened and wanted to tell me what occurred on the evening of Wednesday, December 8."

"They showed me a drawing made by the father (an excellent illustrator) and I was astoudned, since it is the same figure that is currently been seen in many countries. They gave me his phone number to arrange an interview. I visited at 16:30 hrs. and he told me his experience. He only asked me not to show his face, since he is a natural resources inspector. Could I photograph him from the back, he asked, and he would tell me everything. And so we did. And you can hear his story. There is a small mistake - I say its the sixteenth, and it was in fact the tenth of December. I am clarifying this to avoid confusion." 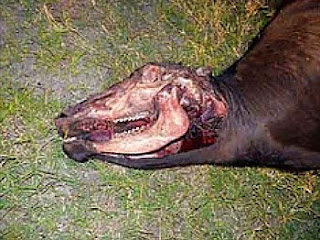 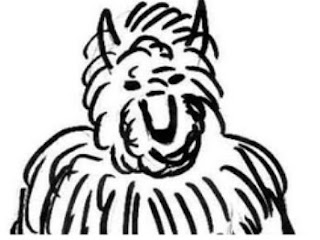 
This is among the most traumatic and complex episodes of UFOlogy in recent times, and it took place in the Pampean locale of Santa Rosa on a 70 hectare field belonging to a cattle ranching family. One afternoon, the Giménez family witnessed strange movements and upon looking closely, the came face to face for ten seconds with a strange being they identified as the infamous “Chupacabras” as it fled the area after mutilating a cow.


In an interview with Expedientes Secretos, Andrea Perez Simondini of the VisionOVNI group remarked that “the La Pampa episode is among the most complex that we have had to investigate, given the fact that it contains many elements that link the phenomenology popularly associated with the Chupacabras to everything concerning the UFO phenomenon.”

Pérez Simondini also provided an important clue by highlighting that “in the La Pampa case, as in many others, there are direct links with the last study carried out in the Misiones incident, with the mass mutilation of ten sheep.”

Regarding the La Pampa event, Simondini recently published a document written by the protagonists themselves – the Giménez couple – making evident yet again the need for investigating these cases in depth. “We are Alberto and Alicia, and we are writing to tell you about our somewhat startling experience, involving a close encounter with the alleged Chupacabras,” said the couple in the document about the 2008 incident.

“We are from Santa Rosa, La Pampa Province, west of Buenos Aires Province. We live in a small seventy hectare field where we keep 30 cows and general livestock. Our country has recently suffered the strange phenomenon of cattle mutilations, attributed in great measure to this bizarre being,” stated the protagonists.

They explained: “Our cow pasture is approximately two kilometers away from our home. We tend to release them from their pens at eight in the morning, a task carried out by our three farmhands, and we bring them back ourselves in the afternoon, aided by our eldest son.

Winter was just starting when the events occurred, and the couple was getting ready to bring in the cows around five o’clock in the afternoon. At that moment, Alberto saw three of his cows running some 200 meters from the stables. “This surprised us, because the cows have learned their daily routine. It should be noted that the pasture is located near a very dense patch of vegetation. This prompted us to jump into our pickup truck and head toward them in a hurry, feeling concerned.”

“The closer we got, the more we were alarmed as the cows were scattered. Our son jumped out of the pickup to round up the cattle, when were struck by a pervasive and disagreeable smell. We tried find out the source of the smell, and after walking 300 meters into the wilderness, we found the mutilated carcass of a cow missing its internal organs and genitals,” they said in the document.

According to the story “there was no trace of blood, which was surprising.” But that wasn’t all, because after combing the area for 10 minutes, Alicia heard strange noises from the pasture near the brush. He thought it was someone trying to sneak away. “We approached thinking we’d find a cattle rustler or an animal responsible for the cow’s death. We were scant meters away when we saw a being with the Chupacabras’s characteristics. We could see it for approximately 10 seconds, as it vanished into the trees,” they stated.

Simondini explained about the case that “it is very serious, confirmed even further by interviews to the family unit and with field work performed in the area.” She added: “the episode can be added to a long chain of events of similar characteristics. The latest was in Misiones, with the mutilated sheep that are still under study.”

Tales of encounters with the chupacabras are uncommon. In general, cases become known when mutilated animals are found. For this reason, the Gimenez family’s report in La Pampa is special. “The witnesses had the chance to run across the chupacabras, defining it as a 2-meter tall being with abundant fur, a face similar to that of a dog, claws, and great agility when it comes to leaping or climbing.” Simondini seeks “the close relationship between these cases and the UFO phenomenon, including events where the creature’s manifestations are tied to apparitions of lights.”

Andrea Perez Simondini is one of the country’s best-known researchers. Both she and her mother, Silvia Simondini of the VisionOVNI team, carry out a number of studies on cattle mutilation cases and their link to the UFO phenomenon. With regard to the La Pampa incident, and the Gimenez family’s story, she remarks that “mutilations occur all the time, throughout the country,” explaining that “not only the discoveries are involved: there are strange episodes before and after the animal attacks.”

“For example, we’ve recorded episodes of cattle attacks which also left hens in the area sterile, unable to lay eggs, within the framework of biological consequences that probably share the same origin,” notes Simondini. She also commented about the case involving “a rooster in Misiones that had to be put down in the area where the mass sheep mutilation occurred, due to its abrupt change of behavior.”

The La Pampa incident is associated with many episodes. In the locality of Colonia Elia in Entre Rios, in 2004, the creature was also seen by witness, in this case the son of the owners of an industrial chicken farm. He fired four times at the entity, but never managed to wound it. We carried out in-depth field work in the area, and we even found hairs in a trap that the family had placed to catch the entity.” As part of the report created around the event, the protagonist made a drawing which highlighted the “visitor’s” main characteristics.

There is probably no direct association of the sighting with the mutiliations in this case the "Dogfaced Ape Chupacabras" was more likely to be the "Bearlike" Ucu or Ucumar, the larger of the two South American Unknown apes and more like an orangutan as usually reported. Below is a representation of a "Chupacabras" seen raiding a henhouse in Chile, From Randy Merrill's Cryptozoology Blog, possibly also another one of the same type.
http://thecryptozoologist.webs.com/apps/blog/show/6737659-el-chupacabras-blood-sucking-creature-from-the-netherworld-part-1      (Part 1 of a three-part series)

Basajaun, the Basque Lord of the Forest, is featured in a new short-subject film. Creator Sergio Morillo Echavarri is currently involved in the post-production phase of Basajaun y las lindes de los bosques (Basajaun and the borders of the forests), his first motion picture project.

In order to narrate the story of this eldritch creature, halfway between cryptozoology and legend, Morillo has chosen three dimensional special effects and characters to be merged with the presence of human actors. Exteriors were shot in Urbasa, and the chromakey technique has been employed for interiors - actors film their scenes before a green screen which can later be worked upon digitally.

The plot, according to the director, “tells the story of how this mythological creature refuses his fate, which is to vanish, and will find himself swept into confrontations with humans, the miscreants who chop and destroy without any concern for the woods loves and protects, and that are his home.”

A three-minute demo on the composition of some of the film’s scenes was presented, and it can be seen at http://criptozoologos.blogspot.com/

We would like to congratulate Sergio Morillo for having successfully carried out his project and for having chosen such an interesting subject as the cornerstone of his work. Anyone interested can follow the day-to-day progress on Basajaun y las lindes de los bosques on Facebook, where the director narrates all current events regarding the film.

posted by Inexplicata at 6:25 AM

http://sorginzulobilbao.net/es/imagenes/making-of/basajaun-tartalo/
Posted by Anonymous at 03:04