The creature in the black and white sides of the comparisons above are all versions of an enhancement done by M.K. Davis from a trailcam video footage of what is referred to as a White Bigfoot. The footage is from an undisclosed footage but it is said to be from Texas. In which case the topmost comparison above might be the most pertinent. M.K. Davis discusses tyhe footage in the Youtube Videos, and since it is said to sometimes travel on four legs and sometimes on two legs alone (and sometimes very rapidly on two legs alone), I am classifying it with the reports of North American Apes or NAPES. there are periodic reports of "White Apes" in this category but I suspect that is more to do with the imaging systems of the nightvision equiment rather than the creatures being albinos. In the above comparisons, the "e has some important resemblances to all of the ape forms, while there is a rather important difference in comparing the head to the head shown by the female in the Patterson-Gimlin film. The shape of the head is much more like that of a gorilla.

Below are some individual frames selected from the video. I understand the greenery has been coloured in to provide contrast: 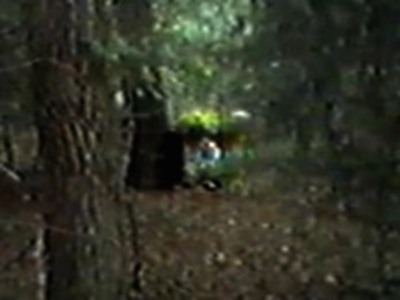 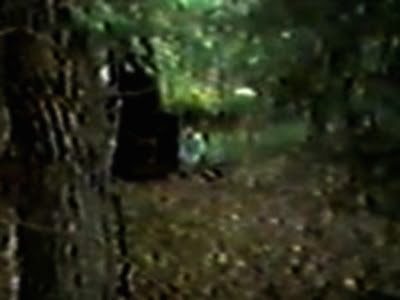 This is the latest upgrade to the M.K.Davis 'Creek Walker Bigfoot'...a supposed white Bigfoot captured on video. This offering is said to be presented in HD...it may be a higher pixel ratio instead. Nonetheless, the new video does show something unique.

I have zoomed and attempted to clarify a few screen captures.
In my opinion, if this is an example of a Bigfoot then I would venture to say that this is NOT a terrestrial being. The movement and relative head to body size is much different that we have been lead to believe. In my personal experience, the being I encountered was very similar in shape to this example. Its movement were more human-like and the head to body size ratio was also similar to that of humans.

It is my belief that the genre of Bigfoot and unknown hominids are, in fact, cryptoterrestrial and not natural creatures...at least in this dimension or time. These images are remarkable and add proof that the Bigfoot community needs to start thinking 'outside the box' as to the real origin of these creatures. I'd be interested in your comments...Lon 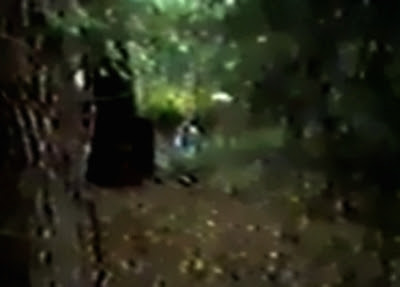 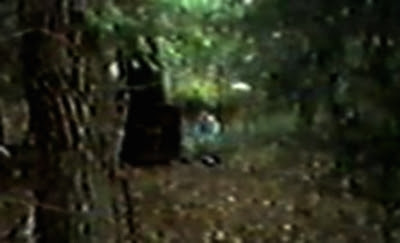 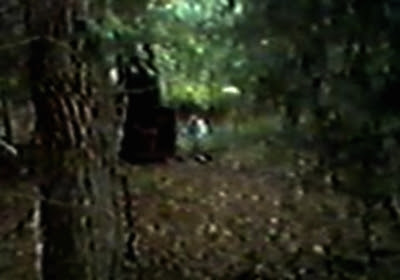 The following "White Ape" image was taken from a different Trailcam in Ohio:

Below is a report of one of the more apelike "Bigfoot" reports in Texas.

Re-enacted Sketch at Bottom of Page

UPDATE!!!
New Sketch Addition.
August, 2002 Randy King was kind enough to work with Bobby Hamilton
in order to better illustrate what Bobby saw at his window that
Fall night in 1969. Thanks again to Randy for some incredibly
good artwork.

NEAR MISSION — An orangutan-like primate reportedly roams the streets here, but no one has been able to capture an image of it — much less the animal itself.

Several law enforcement agencies have heard reports — often rumors — of a large orange- and red-furred animal that wears a white beard, but only one has a documented case.

On April 15, the Hidalgo County Sheriff's Office received a call concerning the creature from a homeowner in the 6200 block of Western Road, according to information from Sheriff Lupe Treviño. Jose Garcia spotted the animal running into an orchard in the southwestern corner of Mile 5 and Western Road shortly after 10:15 p.m., according to the report. And Garcia told authorities a family member also saw it, several days earlier near Mile 3 and Western Road, west of Mission.

Investigators who went to the scene solicited the help of John Franz, a Brooks County cowboy, to help apprehend the animal. Dispatchers clocked in Franz's arrival several hours later at 3:29 a.m. April 16. It's unclear from the report if anyone else spotted the creature or if it was caught.

Tuesday morning, Mission police became the latest to catch wind of the animal when they received a report from a student aboard a school bus. The sighting of a large primate — later described as the size of a 13-year-old boy — was reported near Stewart Road and Mile 2, said Cpl. Manuel Casas, Mission police spokesman. An officer searched the area, but did not find anything, he said.

Lupe Tijerina, who owns a home just north of the intersection in Mission, was cutting the grass outside his home Tuesday afternoon. The 77-year-old said he hadn't seen or even heard of the alleged primate roaming his part of town.

"Ah, Chihuahua. Oh my golly," Tijerina said after hearing the animal was reportedly the size of a teenage boy. "That's scary. We have a lot of grandchildren and great-grandchildren over here."

Mission police later corrected the initial information released and said the sighting had occurred near Mile 2 and La Homa Road, which placed the new sighting in Palmview's jurisdiction.

Palmview police Chief Chris Barrera said he heard of reports in Mission, but his office had not received any calls.

Norma Vargas, 42, works at the H&H Meat Market at the Palmview intersection where the alleged orangutan was spotted Tuesday morning. Though she hadn't seen the animal, she said, her 10-year-old son Alberto had mentioned a sighting about two weeks ago as they drove through a neighborhood near Mile 6 and La Homa Road and came across a group of sheriff's deputies standing outside a home. Her son asked if she knew why the officers were looking up at the trees. She said no.

"They're looking for a monkey who bit his owner," she recalled Alberto telling her, and one of his friends who lives in the neighborhood had spotted it.

Indeed, Mission investigators believe a primate-like animal has been roaming the city for a few days now.

About two weeks ago, dispatchers received calls about a spider monkey, Casas said. And while officers did not catch that animal, they believe they traced it to a man who was selling them outside of the Mission jurisdiction.

Police, however, did not have further information on the spider-monkey case.

The sheriff said his office had not received any information about a spider-monkey vendor, but said he was not surprised by the sighting.

Drug runners have been repeatedly caught with exotic animals of various sorts, Treviño said. His deputies have found small primates, boa constrictors and even tigers.

When he headed the High Intensity Drug Trafficking Area task force in the late 1990s, he participated in a raid where two caged tigers were found in a home north of Donna, he said. They belonged to a trafficker known as "El Diablo."

"It's really common on the Mexican side," Treviño said about owning exotic animals. "They feed their informants and traitors to (tigers)."


In recent news, an allegation has been made that it is legal to hunt for Bigfoot in Texas because there is no specific law protecting it as an "Indigenous nongame animal"

And the answer comes from a discussion of the matter in a different state, Tennessee:


Whereas Texas is, "if we haven't told you you can't kill it, you can," Tennessee is all, "if we haven't told you you can hunt it, you can't."It seems that Bigfoot would be protected by the same rules the Tennessee Wildlife Resource Agency has for alligators. Much like Bigfoot, some folks are certain alligators have made their way into Tennessee, even though sightings of them are still very rare. About alligators, the TWRA says:

There is evidence that alligator populations are expanding north along the Mississippi River into Tennessee. Species which expand their ranges into Tennessee (such as alligators) are protected and may not be taken until a hunting season is proclaimed.


That's pretty clear. No shooting at things until the state has had a chance to rule on whether you can hunt it.
But there's a further bummer sentence for amateur Bigfoot hunters — "The taking, killing and/or illegal possession of hawks, owls, songbirds, endangered species or any other species for which a season is not set (e.g. snakes) is prohibited." Since we have no Bigfoot season and won't have a ruling on whether there will be one until Bigfoots are proved to exist, not only can't you kill a Bigfoot legally in Tennessee, you can't capture one and try to bring it back alive (unless you're a scientist).

After restudying the Texas law, it seems that EXACTLY the same situation exists in Texan law: Unless the authorities specify you can hunt it and they make specidfic allowances as to how it can be hunted and/or taken alive, it is categorically illegal to do so or ATTEMPT to do so. Furthermore it is also illegal to incite or induce others to hunt Bigfoot when it is against the law. The Bigfoot does NOT fall into the category "Indigenous Nongame Animals," stating that this was so was presumptuous and mistaken, and because of that the entire argument falls to pieces.

In this case the individual who had stated it was OK to hunt Bigfoot had misquoted the authority he had asked, misquoted the law, AND this information had been included in the initial press releases as well. It seems nobody was paying any attention to that part.
Posted by Anonymous at 15:06