This seal was declared extinct in 1892. So what is it doing alive and well today?

http://apps.facebook.com/theguardian/environment/2010/sep/29/third-of-extinct-species-alive?fb_source=other_multiline&fb_action_types=news.reads
From The Guardian Online:


This seal was declared extinct in 1892. So what is it doing alive and well today? 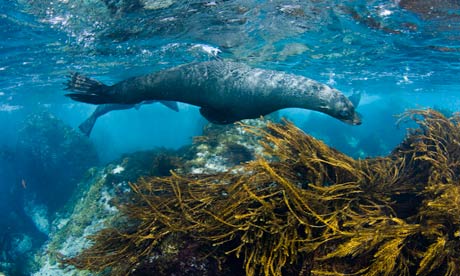 The Guadalupe fur seal was feared extinct, gone the way of the dodo after being slaughtered by Russian and American hunters for their skins. None could be found at breeding grounds and as sightings elsewhere tailed off the species was consigned to history.
So why are there thousands of Guadalupe fur seals swimming off the coast of Mexico now? As naturalists gladly admit, reports of the species' demise at the end of the 19th century were premature. Small numbers of the animals clung on in island caves and were rediscovered only decades later. The population is now thriving, with the latest estimate putting their number at 15,000 or more.
But the case of the Guadalupe fur seal is far from unique – and more animals feared extinct could be waiting to be rediscovered. A survey of the world's mammals published today reveals that more than a third of species once feared extinct have since been spotted in the wild, in one case 180 years after the last confirmed sighting. Rare mammals that were considered dead but later rediscovered were typically missing for 52 years.
The Guadalupe seal was hunted to apparent extinction in 1892, but a tiny colony was spotted on the island by two fishermen in 1926. After a failed attempt to sell two of the animals to San Diego zoo, one of the fishermen went back to slaughter the colony out of spite. He later turned up in Panama to sell the skins, but was killed in a bar brawl. The seals were only rediscovered and protected when a zoologist tracked down the second fisherman, who revealed their location on his deathbed in 1950.
One rodent, the Bahian tree rat, which lives in forests on the Brazilian coast, went missing in 1824. Despite efforts by conservationists, the animal was not rediscovered until 2004. The bridled nailtail wallaby was once common in eastern Australia but seemed to die out in the 1930s. It was spotted in 1973 by a contractor who was preparing to clear an area of land. After he raised the alarm, the habitat was bought by the local parks service to save the animal. Another creature, a small marsupial called Gilbert's potoroo, was missing for 115 years before it was rediscovered in the south of Western Australia in 1994.
Diana Fisher, who led the survey at the University of Queensland, said the number of mammals going extinct was still accelerating despite large numbers of lost animals being found.
Conservation experts have already warned that the world is in the grip of the "sixth great extinction", as imported species and diseases, hunting and the destruction of natural habitats deal a fatal blow to plants and animals.
Writing in the journal Proceedings of the Royal Society B, Fisher lists 180 mammals reported as extinct, feared extinct, or missing since the year 1500. Of these, 67 were later found to be alive and well. Animals that were picked off by new predators were rarely rediscovered, while those threatened by a loss of habitat or hunting by humans were more likely to be holding on in small colonies, she found.
The survey highlights the uncertainties in lists of extinct species, but Fisher said it should help conservationists target their searches for missing species by focusing on those most likely to be alive.
More than 25 large-scale searches have failed to find thylacines, the carnivorous, dog-like marsupials that have not been seen in Australia for nearly 80 years.
Fisher said her analysis puts the chance of the species surviving at "virtually zero". Mammals that were hunted to extinction before the 20th century, such as Steller's sea cow, the Falkland Islands wolf, sea mink and the large Palau flying fox are also unlikely to be found now, Fisher said.
"Conservation resources are wasted searching for species that have no chance of rediscovery, while most missing species receive no attention," Fisher told the Guardian. "Rather than searching ever more for charismatic missing species, such as thylacines in Australia, it would be a better use of resources to look for species that are most likely to be alive, find out where they are, and protect their habitats," she added.
According to Fisher's survey, the most likely missing mammals to be found alive are the Montane monkey-faced bat in the Solomon Islands, Alcorn's pocket gopher, which was last seen in the high forests of Mexico, and the lesser stick-nest rat, a large, soft-furred desert animal from Australia.

REDISCOVERY: The Diatomyidae or Laotian rock rat
which was thought to have been extinct.

Bahian tree rat
A small rodent that lives in the coastal forests of Brazil. Was missing and presumed extinct for 180 years from 1824. A year-long search of the area in 2004 found only one of the animals living in the region. The species is critically endangered and is considered at threat from ongoing deforestation.
Bridled nailtail wallabyOnce common in eastern Australia, this nocturnal species was thought to have died out in 1930. The animal was rediscovered in Queensland after a contractor recognised it from a picture of extinct creatures published in a women's magazine. It gets its name from the horny, pointed tip on its tail. It was hunted for its fur, but more recent threats include foxes and habitat loss. It remains endangered.
Gilbert's potoroo
A small, silky-coated marsupial that was missing in Australia from 1879 to 1994, when conservationists found a tiny population of the animals in the Two People's Bay park area in the west of the country. The animal is likely to have survived because the reserve was already protected to save the habitat of a rare bird. The potoroo suffered from predation by cats and foxes that were introduced to the area. Those that remain are genetically very similar, leaving them vulnerable to diseases. It is one of Australia's rarest animals.
Leadbeater's possumA grey marsupial with black markings. Leadbeater's possum was known from only four specimens collected around 1900. It was considered extinct in 1920 when its habitat was destroyed, but was rediscovered in 1961 during a survey of a mountain forest in Victoria. The population stands at around 2,000 adults, a number that is expected to fall by 90% in 30 years as den trees and nesting habitat are lost.
Posted by Anonymous at 05:09