THE Cuchivilu [Babel Fish Translation]
The Cuchivilu is one being with the upper body in the form of pig. Very robust, with long fangs and bulging eyes, the bottom is a very thick snake. He lives in marshy places, always by the sea, buried in the mud, leaving only its nose into the air to breathe. Man's presence irritates. They say that the female can give birth up to 12 Cuchivilus and teats with which feeds are arranged in his spine. Generally, in the early days of the pups, she gives them their favorite foods, which are exclusively oysters and clams in growth stage. This mythological creature is hated by fishermen, and who know him as the destroyer of fish weirs, chilotes system used for hoisting the fish. On the beach have a fence made of sticks, woven baskets and close together as each other, so just be possible that the sea water to drain or seep. This pen is shaped like a horseshoe, and its opening is located toward the earth, so the pen remains covered by high tide and low tide, are caught quantities of fish and seafood then easily collected in the Chiloe available in baskets. This is an ingenious way to fish, which is also utilized by The Cuchivilu, which appears in the pens destroying it, completely. Snares fish and seafood to your appetite satiated while removing the sand with its snout, like any pig of the inhabitants of the land. It is detected by the grunts and leaves the unmistakable imprint therefore not reused again that poultry considering since then, for fear of scabies in the sand leaving the body of this animal. But, some pens to be repaired again after a while and "cleaned" using a special ceremony called "Chepu", which is removed the spell. http://mitologiadechiloe.blogspot.com/2008/06/el-cuchivilu-plumaaguada-el-cuchivilu.html

If there is such a thing as a Southern Walrus it might also be called by the name of Cuchivilu as being  a tusked "Sea-Pig." There is some confusion in the mythological sea-creatures off of Chile and it is possible that the tusks are also referred to as "Horns"
From ThinkQuest:
THE CUCHIVILU
In many sites of Chiloe's province, a special and easy way of fishing is still used. In the beach a semicircular fence of branches is made open to the land. This fence is called Corral de Pesca. When the tide is high, the fish weir is covered by water, and when the tide is down, the fish that came close to the beach are trapped in the fish weir. From time to time a monster called Cuchivilu appears from the sea. This monster has half a body of pig and half snake. This animal comes into the fishing fish weir to destroy it, and eats the fish inside it. With this visit the site will become cursed, and a fish will never become trapped again inside of it. But there is a way to detroy the witchcraft : a magical ceremony called Cheputo.

--The actual creature the Cuchivilu is based on is the Elephant seal. the number of the young. the number of the teats and their arrangement are spurious inventions. The part about their destroying fish weirs and eating the fish is apparently true. The creatures are depicted as flipperless "Snakes" and then again with flippers, as on the stamp. The part about the flippers is true. A male Southern elephant seal is shown to scale with a human below.

Camahueto
It has the form of a short leaden calf fur and bright with a horn in the middle of the forehead. He lives in rivers and swampy lagoons into adulthood that achieves at twenty-five years, then migrate to the sea destroying everything in its path.
When he discovers his presence hire a witch to a kelp rope so Lacee and remove the horn to make it a gentle lamb.
With the grindings of the male Camahueto horn prepare potions to cure various diseases, as well as restore the vigor and sexual potency in men. 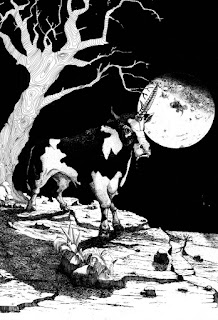 The Camahueto  (PEN, 0.55 X0, 75 ctms.)
The Camahueto is known as The Unicorn prodigious. This fabulous animal has a shiny coat, short and leaden looks like a vigorous calf and its most precious ornament is a golden horn that grows on the forehead. This mythical creature is something special. His birth took place in the depths of the earth and in some cases, on top of a hill near the sea. Then it is found in the lakes or rivers muddy and later, when it reaches its development, on the twentieth or twenty-five years, migrates its way with its powerful horn which will make a huge trench in the earth in its journey towards the sea, where dwell forever. Destroy everything in its path causing great damage to property and sembradíos.Hace appeared on full moon nights. Emerging from a river or a lake, its coveted horn shine like gold in the light of the moon. Seek him with ambition, because this animal is credited with healing powers, witches being macho and the only ones who can give chase. To do so use a rope made of seaweed and they will succeed only on land, but never at sea. To capture and be holders of the horn, warlocks and Machis enjoy unlimited power to use the powers of the scrape of it as beneficial or malevolent. Camahueto is said, the sea is very powerful and large vessels rammed and makes them disappear into the depths with all hands. At cortársele his horn with a machete (in the hands of a gun or warlock), the mythical animal is transformed into a meek and docile calf and stop damage to farmers. Who encounter a Camahueto and is slightly injured by his horn, will, insurance, health and much luck for life.

The Millalobo present a shiny coat of gold, hence its name, and the ability to change the shape of your face. This mythological creature is said can not speak and only communicates through a kind of bleating like sea lion, but even so, the meaning of their bleating is easily comprehensible to humans. Legend has it that the view Caicai, found a being to his liking, and how after his battle with tenten wanted to delegate power to someone, Millalobo was chosen for that office The Millalobo lives in the sea floor, with his wife huechula and the three children of both the Pincoya,The Pincoy, and the siren chilota[All of them Merfolk]Who assist with the task of managing the seas.
Product of the great work that is mastering the seas, the Millalobo is subordinate to a number of mythological sea creatures to do different jobs, which range from plant and care for the development of shellfish and fish, to manage the marine climate, in addition to guiding and care for the dead that produces the sea
Sea creatures are evil, they should also pay their respects.

The Millalobo lives in the deepest sea. He became pregnat under the command and protection of the waters spirit Coicoi-vilu, by a pretty woman and a seal. That happens when the waters invaded the Chiloé lands.

He's like a big seal, with a mix of man and fish face. The superior half body looks like man, and the rest like seal. His skin is covered by short and shining gold pelt, this is the reason of his name Millalobo or Golden Seal.

He lives with la Hunchula. She's the daugther of an old machi called la Huenchur, and when the weather conditions are good, Millalobo and Huenchula go out the sea to lonely beaches looking for the pleasure of sun rays.

Millalobo, was nominated by Coicoi-Vilu, like master of seven seas and he is the supreme boss of every creature in the waters. His power is like Neptune power from greek mitology.

Like sea master, he gives some missions to several water creatures, they obey his commands like seeding fish and seafood, watching the growing and multiplication of sea creatures, and controlling the tide and storms. He commands abo the actions of malefics creatures like la Vaca Marina [The Sea Cow], el Cuero, el Cuchivilu and el Piuchén.

--The Millalobo appears to be simply the mythologized version of the ordinary sea-lion. Interestingly it is also supposed to be associated with the oceanic Merfolk under several different names, which are listed as its offspring

El Pincoy, the Chilean Selkie (were-seal)
Below, his sister and mate, La Pincoya, the Chilean Mermaid (Delacruz on Deviant Art)