Bigfoot and the Cherokee Hill 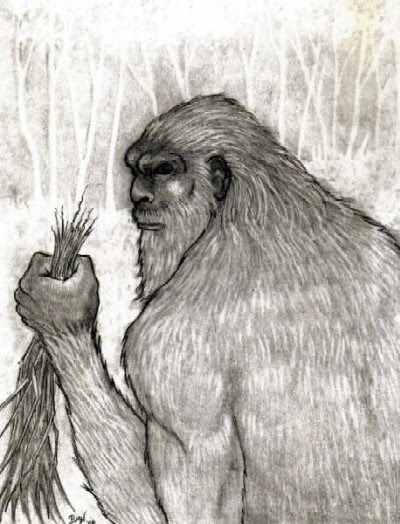 According to one witness, this is what the Hebbardsville creatures look like. Described as averaging 8 feet tall, 400 lbs. with black skin and long arms that hang below the knees which they use in order to run swiftly. Flat, bearded face with receding chin-line, broad nose, thin lips and dark brown eyes beneath a prominent brow ridge. Covered in short hair with longer fringes about the beard, back of head and genital areas. Low forehead with hair “like a man’s combed straight back” (sketch by B.M.Nunnelly, 2006).
(The report and all photographs are by Kentucky Bigfoot researcher Barton Nunnelly). 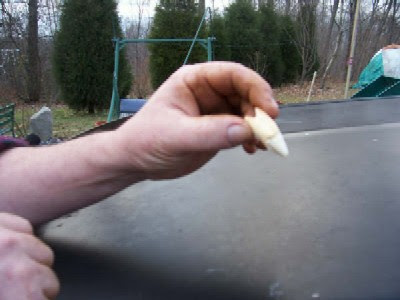 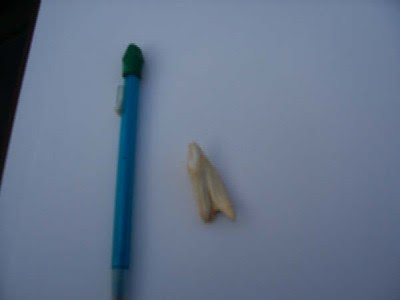 Bart Nunnelly is convinced that Bigfoot exists, and may even be thriving in the many remote wilderness areas of North America. He has good reason to think so. As co-owner and co-creator of Kentucky Bigfoot (with fellow Bigfoot researcher Charlie Raymond), Bart devotes a great deal of his time researching sightings and examining evidence of these remarkable forest giants in the Bluegrass State. And the evidence he’s gathered is both fascinating and compelling. Bart recently met with an eyewitness to these creatures, a Cherokee elder who took Bart on a journey into the heart of Bigfoot territory and provided detailed information about the giant from his own experiences as well as the age-old traditions of the Cherokee people, who know these creatures well. This is Bart's story....
(Note: The names of the locations in this report have been intentionally altered for the privacy of those involved.)
After learning from a local paranormal investigator friend of mine about an old Cherokee fellow who also claimed to be a Hebbardsville, Kentucky Bigfoot witness, a phone interview was arranged and conducted in November, 2006. The information proved correct. Not only did the witness describe repeated (often at will) sightings of groups of these hairy creatures since his childhood, he also claimed to be in possession of what he was convinced was an actual tooth, which he described as a canine, from one of these creatures. Moreover, he could describe, in great detail, the physiological features, general attitudes and predictable behavior of these mysterious “hillbillies” known to the rest of the world as Bigfoot.
The alleged Bigfoot tooth which resembles a human canine, only much larger. Throughout the 19th and early parts of the 20th centuries many many sources cite the discovery of giant human-like skeletal remains in the Bluegrass state, the vast majority having been found buried in Native American Indian burial grounds or mounds. The witness’ mother related to him before her death that she had personally witnessed the excavation of one such grave In Beals, Ky., between Spottsville and Reed, back in the 1920’s. It was discovered during the process of building a bridge over a large creek. The bones were measured and found to be nearly 12 ft. tall! The giants remains passed into private ownership and their whereabouts went unrecorded, (photo by B.M.Nunnelly, 2006). 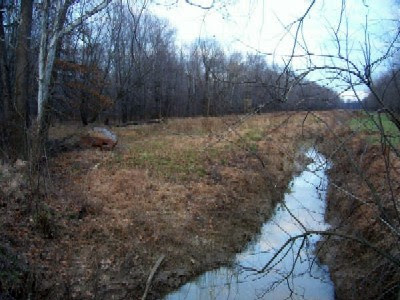 Click on image for full-size version
Location in Hebbardsville, where witnesses reportedly regularly observed Bigfoot creatures eating roots and grass. This creek, which runs along the Green River, was a primary route of travel for the creatures according to witnesses, (photo by B.M.Nunnelly, 2006).

Bart Nunnelly is the author of Mysterious Kentucky, scheduled for publication in Summer 2007.

This was a story that was posted in my yahoo group Frontiers of Zoology and on the site Cryptomundo at about the same time in December of 2006 or 2007. There was some discussion about the tooth at the Cryptomundo site including the additional information that the tooth was a premolar and not a canine: our discussion went a little further and specified that the tooth had characteristic NEANDERTHAL traits and was not only "a big Indian's tooth"
Neanderthal teeth often show the feature called Taurodontism, in which the pulp cavity of the tooth is expanded and as a result the root tends more and more to form a tube shape. Below are asome unwarn Neanderthal teeth and the Hebbardsville tooth on the right, showing the expanded pulp cavity, and the line drawing under that illustrates the degree to which the Taurodont trait can be expressed in different individuals.

The tracks are once again typical Eastern Bigfoot tracks and are Neanderthal-like but larger, Similar tracks are found in Tennessee and the other adjoining states, up to Pennsylvania and including also Georgia and the Carolinas.

Alabama track in winter snow, in the mountains, and adjoining the mountains of Kentucky and Tennessee.This track has a definite heel-skid making the heel of the track appear more pointed and elongated

It’s not as likely that you’ve ever seen or heard about this particular cryptid, either because there aren’t any cases on file about the Pope Lick Monster (named after the Pope Lick Creek below the Pope Lick Train Trestle), or because sightings of this creature began in late 1940s to early 1950s and have faded since then. All the same, the Pope Lick Monster is an interesting character: a human-goat hybrid appearing to have the body build like a man with fur covering the legs, translucent skin, and a hooked nose like a goat. Also, the goat-man has short, sharp horns protruding from the forehead, situated by long, greasy hair. It’s said he mimics voices of a loved one asking for help on the train trestle at night. The victim will be so drawn to the voice, they’ll barely notice the oncoming train and will either be ran over or plunge the 100 foot drop off of the bridge. 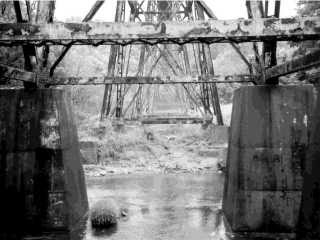 The only known incidents involving the monster that I’ve heard of where: a group of Boy Scouts camping on a hillside near the trestle driven from their camp late at night by a creature that screamed and threw stones at them, but keep in mind this is also Bigfoot behavior. In 2000, a man at the age of 19 died from falling off the trestle – which could have had something to do with the Pope Lick Monster.

One woman recalls in her youth hearing stories about the Pope Lick Monster: “It was part of a senior tradition,” Mary Ruckriegel, wife of Jeffersontown Mayor Daniel Ruckriegel. “They would go out there to see if they could see it; it was a sign of bravery,” she added. “The boys would take the girls out there to try to scare them. It was something really scary.” (Kendall, 2001.) 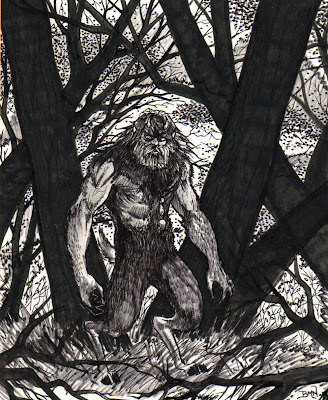 And still, the origin of the Pope Lick Monster has never been confirmed. There are several views that the monster was a reincarnated form of a farmer who sacrificed goats in exchange for satanic powers. Others have said that the monster was a circus ‘freak’ out for revenge to the people who were cruel to him, the story here as follows: “In the late 1800s there were rumors of a wild animal roaming the Canadian wilderness. Locals called it The Pope Lick Monster. Stories about the creature caught the attention of a circus owner by the name of Silus Garner. He offered a generous reward to anyone who could capture the mysterious monster. Finally someone tracked the creature down, captured it and claimed the reward. Garner began to exhibit the Goat Monster in his circus freak show. He travelled by train from town to town and the monster was one of his star attractions. But Garner mistreated the monster and it grew to hate its captor and all other humans. One fateful night, as the travelling circus was bound for Louisville, lightning struck the train tracks, derailing the train and causing a fatal accident. All the passengers aboard the train were killed, all except for one – the Pope Lick Monster” (“Pope Lick”.)


Local police are constantly trying to keep teenagers from climbing up to the dangerous heights of the trestle, and have fenced off certain portions from the general public to try and prevent future death/injury, especially since trains go over this bridge many times on a daily basis, and it’s hard to (safely) escape the bridge from an oncoming train. So, it’s important for police officials to monitor the area (Pope Lick Monster, 2010.)
Picture #1: Wikipedia, "Pope Lick Monster" Picture #2: credited to B.M. Nunnelly

[-In this case again I think the "Satyr" or goatman is a Wendigo wearing an animal skin as a disguise, keeping the animal's horns and goatlike legs intact in the hide The hide could well be a deerskin unrecognised. I have other reports seeming to describe the same thing from New Jersey and other parts of the US and Canada.-DD]

Monsterquest photo for an Ohio "Grassman" dwelling covered by a rofing of grass or shrubs. Such structures are also reported in Indiana, Kentucky and the surrounding states. I have ibnspected some such structures in Indiana that are about twenty feet in diameter with a scooped-out floor area.)

In the case of Kentucky also, one of the purported "Bigfoot" photos seems to me to be instead one of the clearer representations of a Skunk Ape (as they are called in Florida) Not only are the face and head a close match for an orangutan, the long furry arms as indicated have a distinctly orangutan like look to them

Reconstructed-representation of a "Skunk Ape", also similar to a young orangutan.This looks like it is redrawn off of a Native mask.
Posted by Anonymous at 12:14