A   Short Update on Recent Chupacabras Activity in Mexico 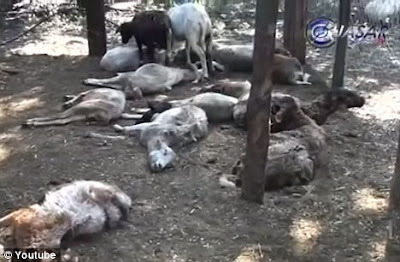 When farmers in Mexico found 35 of their sheep slaughtered with significant claw and tooth marks around their necks, they had one creature to blame – the legendary chupacabra.
One man tending to the sheep overnight in the small Mexican town of Paracuaro said he saw animals with sharp fangs and wings kill the livestock.

Dubbed the ‘Bigfoot of Latin culture,’ the chupacabra is a legendary four-legged creature that many think is responsible for attacking and killing livestock.


Michoacán's Diario ABC reported the strange deaths of 35 sheep in the town of Parácuaro. The incident occurred in the early morning hours of 1 March 2012. The bodies presented claw and tooth injuries; the majority of the injuries were under the neck, as if sliced by a razor. The person who looked after the sheep pens stated that he saw the entity that attacked the animals: it had fangs, claws and wings, and moved very quickly.

Agustín Carrillo Madrigal, the owner of the sheep, said that the pen is a quarter of a hectare in size, surrounded by a 2 meter tall cyclone fence. Six rams were kept outside the pen. Three of them died there and the others turned up dead on the outside. An inspection of the perimeter did not show any opening through which they could have exited.

It should be noted that the same enclosure also contained cows, horses and pigs, which suffered no injuries at all. - Source: Ana Luisa Cid & Diario ABC (Michoacán)

Thanks to Scott Corrales - Inexplicata
--My opinion is that MOST "Chupacabras" mass-killings are like this-some kind of an epidemic kills several animals all together and somebody sometimes finds SOME signs that some kind of animal had inflicted wounds and was drinking blood of one or at best only a few In this case the winged creature was once again possibly one of those oversized false vampire bats we have been discussing on this blog before-possibly a rabid one. Incidentally, the representation of the "Chupacabras" at the top could easily be based on a visual report of such a bat with the wings folded up and hidden: there are many points of correspondance between the mock-up and the actual bat as represented below.

All it needs is to have  the hair on its back mussed up. Best Wishes, Dale D.
Posted by Anonymous at 10:08