Even More on Giant Catfish


Giant Catfish Caught on Camera in the Mississippi River.


Photo Proves Giant Catfish Story Is Not A Myth 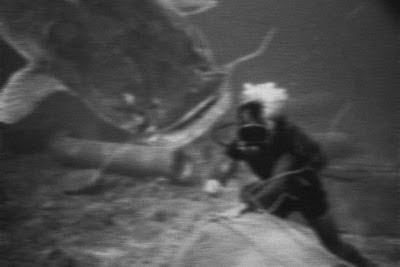 The photograph above, captured one year ago today by a U.S. Army Corps of Engineers AFD (Automatic Foto Drone) at a dive site on the Mississippi River, proves what many people have been saying for years: enormous catfish-some weighing hundreds of pounds-live in the deep, dark waters swirling below many of America's large dams. The incredible photo, shown here for the first time, is one of a series shot by the high-tech surveillance camera. It was taken while divers worked to repair damage to an underwater pipeline below Melvin Price Lock and Dam at East Alton, Illinois. Ironically, this is the same area in which Illinois angler Tim Pruitt landed a 124-pound world-record blue catfish on May 21, 2005.

"The AFD shoots a continuous series of photographs-one every two minutes-to document work at each site," said ACE spokesmen Sidd Finch. "This particular series, taken on the 1st of April last year, was being examined recently by engineer G.O. Welles when he noticed the huge fish behind the diver in this single frame. The diver, Theodore Hook of Cardiff, New York, said he was totally unaware he had been this close to a fish that was probably big enough to have swallowed him. But he claims he and other divers have seen gigantic fish like this before."

According to Charles Piltdown with the Regional Underseas Studies Endeavor, the fish in the photograph appears to be a flathead catfish (Pylodictis olivaris), but the fuzzy nature of the picture makes it impossible to determine for sure.

"Barbels, or whiskers, are clearly evident on the fish," the ichthyologist reported, "which tells us for sure it's some type of catfish. And by comparing the fish's dimensions to the size of known objects in the photograph, we were able to estimate its length at approximately 105 inches and its weigh at around 700 pounds. This is quite possibly the largest catfish ever documented, larger even than the 646-pound Mekong giant catfish captured in northern Thailand in 2005. It may be a new species, previously undescribed."

Since the early 1940s, when hydroelectric and flood-control dams started springing up around the country, divers working around these structures have reported seeing incredibly large catfish, including some so enormous the divers refused to go back underwater because they feared the consequences of encounters with these huge creatures.

"I've seen some catfish I knew were twice my size, and I've seen them while diving at 16 dam sites in six different states," said George Hull, an experienced diver who works for Freshwater Research and Underwater Development. "But telling people you've seen them is like saying you saw the Loch Ness monster or a UFO. No one believes you, so after a while, you figure you're better off if you don't discuss what you've seen.

"I'm just glad someone has finally proven the existence of these fish," he continued. "And because it was a government agency that found the evidence, it will definitely be indisputable. Maybe now people will believe what divers like me have been saying for nearly half a century-there are fish out there big enough to eat people, and the fact that someone hasn't been hurt by them already is nothing short of a miracle."

Trained biologists like myself have always dismissed encounters such as Hulls' as nothing more than figments of the divers' imaginations. But hardcore evidence like this photograph will make it difficult to dispute such sightings, which have been reported from at least 87 dam sites throughout the country. The evidence is clear: something huge is out there-lots of somethings-and it will take the concerted efforts of state and federal authorities to determine what it is.

Unless, of course, some catfisherman like me catches one of these beasts first. I'm heading for the Mississippi River to do some fishing today, and I'm gonna use something big for bait: a Pomeranian perhaps, or maybe some of the stray cats running around my neighborhood. I figure if I tie one to the winch hook on my truck, I ought to have a decent chance of landing anything that bites.

and i've been watching the giant fish document on NG about the mekong catfish, and watched it captured & tagged, it was about the size of the man, but he and another fisherman could control it while in the water with their bare hands....

this however.. looks nowhere near like a fish you could control or would even attempt to.. possibly the angle as said above but damn....

if the mekong was 646lb, then by way of picture (grainy photo, angle possibly) & size comparitive to diver i'd venture it's far more then any 700lb fish.. Damn. that's rediculous. it definitely has to be the angle..... Right?... right!?


They said about 2 years ago, see If I can't find something of it online. Fisherman in the mississipi River where reeling in a catfish and they said just the tail of it told them it was atleast 650 lbs, before it snapped the line. The mississippi river is full of monsters.

The fish is coming from behind. I remember another story where the 16 feet, 675 pound wels catfish was caught in the Ukraine River. Fisherman said they where close to catching a wels catfish that could have swallowed the boat they where in.

In lake Cumberland Kentucky a 11 foot catfish was found floating dead. Though no one was ever called, or even thought about calling anyone to verify it. An locals say they've had fishes surface that are longer then the boat there in. When I rented a boat to go fishing there. I asked what's the largest fish ever pulled out of here, he said "575 lb catfish." Don't ever take selectively posted garbage on records. Catfish never stop growing.

Also that 646 pound catfish isn't the heaviest reliable catfish fish on record. A 16 foot wels catfish caught in the Ukraine River is, it was heavier. The largest wels catfish weighed 675 pounds, and was 16 feet in length. National Geo, and others need to get there facts strait.

There was also the famous 13 foot man eating wels catfish caught long ago. In Animal facts and feats 1982 they also confirm it was dubbed a man eater. I'm sure everyone has seen the pick of it. With the two Russians around it. Was said to have taken two grown men opon further research.
This is your typical wels catfish. [In a forced-perspective shot also-DD]

Just the Mississippi River, people have no idea how big the catfish are. There are even blue catfish in there well over 200 pounds. An that the blue catfish record will keep getting broken. You'd have to clear out all the water to really get an idea of what's in there.

CAT TALES FROM THE 17th CENTURY TO THE 19th
French missionary Jacques Marquette was perhaps the first to describe the gigantic catfish inhabiting the mighty Mississippi. In 1673, Marquette accompanied Louis Joliet on an extensive exploration of the Mississippi. In his journal of their historic venture, Marquette told of hefty catfish colliding with their canoes. "We met from time to time these monstrous fish," he wrote, "which struck so violently against our canoes that we took them to be large trees, which threatened to upset us."
http://www.arkansassports...ish-fishing/ar_aa060303a/
"The fish is behind the diver, in the frame. The diver never even saw the fish, it crept up from behind. It's probably between 700 to 800 lbs. As unbelieveable as it sounds, there have been even bigger sightings in the river.

This particular series, taken on the 1st of April last year, was being examined recently by engineer G.O. Welles when he noticed the huge fish behind the diver in this single frame. The diver, Theodore Hook of Cardiff, New York, said he was totally unaware he had been this close to a fish that was probably big enough to have swallowed him. But he claims he and other divers have seen gigantic fish like this before."


...In other words, the photos were part of an April Fool's Day gag.

But the rest of the information is actually correct, the part about the dead catfish reported floating at Cumberland, the quote from Jacques Marquette, and especially the part about the wels catfish records-all independantly verifiable. And so I thought the piece was still valuable enough to run for only the supporting comments left after the original posting of the hoax.
12-foot-long, 700 pound catfish are not even very large by the standards of these allegations, which will regularly run as large as any wels catfish records from Europe.