In checking the possibility that some "Duendes" in Mexico might be Freshwater monkeys, research took a side turn and headed instead for the dwarfish creatures called Chaneques. Whereas there is some question about whether the Duendes and Aluxub being heavily influenced by or even introduced by the Europeans becuse the stories are so similar the the Fairy Tales of Europe, the Chaneable tradition behind them in Mexico. It is thought by some that the tradition runs back to the Olmecs. 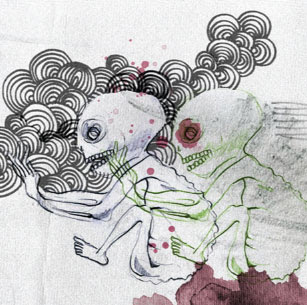 SNARING A CHANEQUE
In June 2007, workers at a veterinary ranch in Metepec found that some birds they were breeding had been mysteriously killed. Fearing that some hungry rat was the cause of these attacks, they set up traps and waited. The following afternoon, Angel Nuñez, a veterinary assistant, found “something” lodged in the trap. He tossed it into a tanning solution without looking, figuring it was one of the pesky Egyptian rats that sometimes found their way to the ranch.
The next day it was discovered that the “rat” was really a small life-form with humanoid characteristics. Angel informed his colleagues immediately and they examined the strange creature, which exhibited a morphology neither had ever seen. The being was around 28 inches tall, with a large head, eyes, ears, nose, mouth, incisors, hands with five fingers, and, most intriguingly, a short tail.
Francisco García, an employee at the ranch, recalled this about the incident: “It was a chaneque! They are elves that exist in the underworld and go around playing pranks. I’ve seen it when it comes out one side of the gate and looks out at the street. Then it retreats quickly when it notices I’m watching. This time we’ve trapped one and proved they’re real.”
The strange animal is still on display at the ranch as testimony to the existence of chaneques. Studies conducted on the body have proved inconclusive and, for now, the enigma of the humanoid being of Metepec continues.
[This one was 28 inches tall but the creatures are often reported as being a meter tall or so-DD]
http://en.wikipedia.org/wiki/Chaneque

Chaneque or Ohuican Chaneque, as they were called by the Aztecs, are legendary creatures in Mexican folklore. They are conceived of as small, sprite-like beings, elemental forces and guardians of nature.
By tradition, these beings would attack intruders, frightening them so that their soul would abandon their body, which the chaneques enclosed in the depth of the land. If the victim did not recover their soul through a specific ritual, he or she would become ill and die soon after.
In some contemporary legends, chaneques are described as children with the face of old men or women, that make people stray during three or seven days, after which the victims cannot recall anything that happened... although it is thought that they are taken by the chaneques to their home in the Underworld, of which the entrance is a dry kapok tree.
Similar mythical beings are common in Mesoamerican and other Latin American folkloric traditions generally, referred to in Spanish as duende. In the folkloric tradition of the Yucatán Peninsula, these elementals are known as aluxob in Yucatec Maya.

--The physical descriptions of the Chaneques is similar to the Freshwater Monkeys or even more particularly to the Hopkinsville entities: large head with spiky hair coming out of the sides of it, large pointed ears, large eyes directed outward, pinched nose, wide slit mouth full of small sharp-pointed teeth, small but muscular body, long arms with clawed hands, and webbed three-clawed feet. In the depictions below they are most often shown with feet that are awkwardly-placed or reversed. The Chaniques were always associated with water and rainfall, and undreground grottoes where they lived on fish, salamanders and crawfish.[The feet turned backward is a frequent mythological garnish and we can safely disregard it]

Chaniques have also supposedly filmed periodically such as on this youtube video clip.
Posted by Anonymous at 01:37