...providing a much-needed check on mythopoeic archaeological inference, but also on occasion commenting on the important discoveries of the day. Every effort is made to keep the invective to a dull roar. Best plug your ears. Welcome to the virtual-reality playground of the ditched and fameless!

What counts is not what sounds plausible, not what we would like to believe,
not what one or two witnesses claim, but only what is supported by hard evidence
rigorously and skeptically examined. Extraordinary claims require extraordinary evidence.
—Carl Sagan

Face-off: Neanderthal Nouveau and Me

Either I need a better napkin, the back of which to use for illustration purposes, or I need a John Gurche to work some fresh magic with my working hypothesis that Neanderthal carnivory was behind the autapomorhphies* of the mid-face, specifically the larger-than-life nasal aperture and the eye orbits that look like goggles. In this brief addition to my previous two posts on this matter, I will embarrass myself silly while trying to depict the Neanderthal nose in side view, compared to that of people like you and me.
First, I did a quick reconnaissance at Google image to find the size comparison seen in the first illustration shown below. Neanderthals had only a slightly larger brain and brain case than we did, which is clear from the photo. However, if you look at the distance between the forward-most point of the browridge and that of the upper jaw, you can easily see the great size difference. The Neanderthal nose and upper lip were on the order of twice as tall as ours!
I couldn't use the above image for comparison, because as with so many Neanderthal fossils, the nasal bones were missing in this one and the entire area is a plaster reconstruction. Instead I went back to the Shanidar 5 skull, which retains the nasal bones, and then attempted to show the generalized (European) modern human face in relative proportions.
Now have a look at my (admittedly crude) illustration of this face from the front. 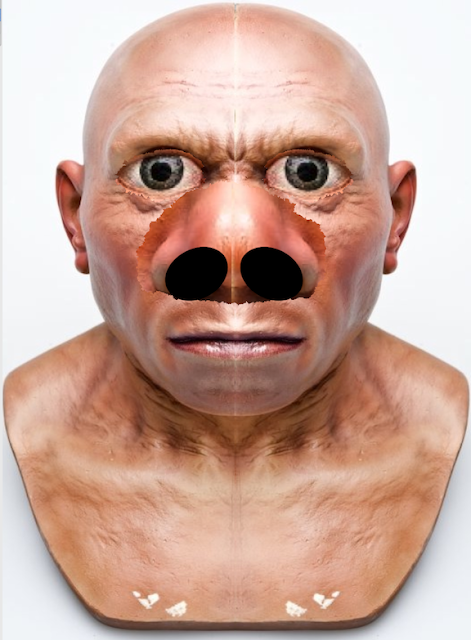 It's likely that you wouldn't buy a used car from this man. Put a hat on him and you'd still think twice about giving him a ride in your car, unless you have one of those K-9 Corps-type meshes between you and him. And you'd probably be right to do so, if, that is, you wanted to keep all of your limbs intact, especially if he likes the way you smell!
I think you'd also agree that there's a considerable difference between the Neanderthal profile that I've constructed and any of the artistic attempts that I've stolen borrowed from the web for this exercise, and which are laid out below. I would go so far as to say that the differences would warrant a separate generic status for this hominid, but then I'm not a flint-knapper member of the club that gets to do that fun stuff.
* This is me using a bit of biological anthropology jargon so the grown-ups will know that I can walk the talk walk the walk walk and chew bubble-gum at the same time. So are all the other high-falutin' words that I use. It's important to switch linguistic code when you're trying to get in with the cool kids.
** The Frankfurt Plane is the specified position of the head in what's known as the correct anatomical position. 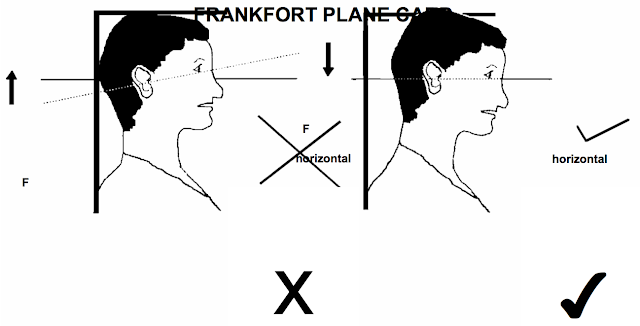 Dale Drinnon said...
Hey there friend, you used my Neanderthal construction head-on to do the blowup of the features!
Your article is quite good, I'd like to quote it, if I may.
And if you need me to morph you another facial reconstruction, I'm ready to do it for you.

BTW, my updated Neanderthal face morph (finished a day later) is attached below:

Subsequently we both agreed that we had both independantly done versions of the Australian Museum's Neanderthal by mirroring the sides and adding black circles in the nostrils. I said this must be evidence of the "Psychic Unity" theory. The nose still isn't quite right but it does go to show where the Iceman got his "Pugged" look: and most importantly, there you have those "Big Eyes" that all the witnesses are so insistant about. They're HUGE!