"Frogfoot" in the Midwest

[This was a matter that was going on over a large portion of the Midwest generally at the time and over the next couple of decades, only the national press was not aware of the fact and witnesses in the different states were not aware there were other witnesses in other states that were reporting the same thing. I was one of the ones personally involved in investigations at the time. At the time I remember distinctly that Reptoids were not spoken of in the UFO or Fortean communities and I was about the only one I knew of that even talked about such things as Reptoids in the mid-1970s.-DD] 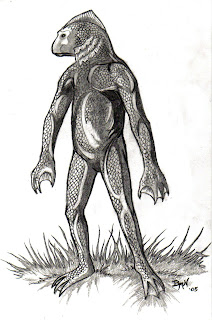 In the early fall of 1966, Joe, a 9 year old boy at the time, woke up to a loud thrashing noise outside of his bedroom window at approximately 1:00am. He went to his window to peak outside, but there was nothing in view. Naturally, Joe went to his living room to investigate the sound that continued to bang against his house. When he came to the living room, he pulled back the curtains of the front door window – to his surprise, he was staring at a 5’6” to 6’ tall man of amphibious characteristics, with dark brown scales covering its entire body. The creature had webbed feet and hands, and little dark eyes. Joe recollects that the brief moment he seen the creature’s face, it appeared to have “hard,” huge rows of gills that flared out on both sides of its face, resembling that of a lizard. Joe doesn’t remember the creature having a nose, lips, muscles, or genitals, but there was a ridge-like feature starting from its forehead and running back over the top of its head.
After the brief moment Joe peered at the creature through the window, it quickly ran for the creek next to Joe’s house. Joe, yet shocked, ran to an adjacent window to catch a glimpse of it as it ran away on two legs towards a creek about 75 yards from his house.
Charlie Raymond (Investigator) and Barton Nunnelly (Sketch artist) provided a follow-up investigation of Joe’s sighting of the Lizard Man in 2006 (making Joe 49 years old at the time.) It was noted that Joe is also married, with two children in college. Joe continually stressed to Raymond and Nunnelly that the creature was “amphibious looking,” although it ran/stood on two feet. He stated that there would be no way someone would have dressed up in a costume like that considering to this day he couldn’t imagine someone owning such a life-like costume, especially 40 years ago in Breckenridge County.
Later sightings of the Lizard Man in Kentucky grew during the 70s (but have died out since) in Louisville – which makes sense, considering Louisville and Breckenridge County are close in region...
Unfortunately, these stories are the latest sightings of the Lizard Man in Kentucky. There haven’t been (to my knowledge) any sightings during the 21st century. [That could be because reports generally have a latency period before they are "Discovered" and circulated-DD]
Sources: Kentucky Bigfoot

The Shawnee Indians inhabited the area surrounding what is now known as the Little Miami River. There tribe had a legend about The Shawnahooc which, roughly translated means The River Demon. As the legend goes a small group of Shawnee Indians on a hunt stumbled upon a fairly large reptilian on the banks of the river. The Indians attempted move in closer. However, upon doing so, the creature took notice of them, stood up on its hind legs, and retreated back into the river. The Shawnee people became extremely frightened upon hearing this. Believing that this creature was a demon they sent their greatest warriors to vanquish the demon or drive it from the river. The Shawnee Indians never again caught site of the creature and, according to their myths, it is believed that after seeing the warriors approach it fled.

The Indians of South Carolina that inhabited the Chicora- an area told legends of The Inzignanin, fish like humanoids that were five feet in height, covered in scales, and had fairly inflexible tails approximately 18 inches long. These Fish-men were believed to consume only raw fish and are said to have died out when the areas fish population depleted.
Wayne, New Jersey:

In November of the year 1974 a motorist on his way to White Meadow Lake in Wayne New Jersey reported seeing a large green humanoid with large"frog-like" eyes and a wide lipless mouth cross the road in front of his vehicle.

The "Frogfoot" creature as reported in Illinois, Indiana and Ohio in the 1970s especially. The creatures were not usually seen, but they commonly left big tracks like a frogman's flippers in the beds of creeks and rivers, and on sandbars, typically emerging from and going back into the water. I investigated such a trackway together with my two younger brothers in the White River (Indiana) but my youngest brother was later known to pull "Bigfoot" hoaxes and so I considered the matter as most likely a hoax or at least highly suispicious.

This is a diiagram showing how the usual carnivorous dinosaurs walked up on their toes but some of them could walk flat-footed. The flat-footed version is very close to the reported Reptoid tracks worldwide.

Three-Toed "Swamp Monster" footprint. A great many "Three-toed" tracks were hoaxed by using an alligator's foot strapped under the soles of each of yor boots, but Alligators have an extra toe off to the side which shows up and gives it all away.

Three-toed "Reptoid" track intact in clayey matrix. Such tracks are generally between one foot and two feet long, and most of them are not really all that large when compared to Bigfoot tracks. The bulk of such tracks in the USA are CALLED Bigfoot, however.

A series of scaly three-toed footprint casts from Alabama

9" to 10" footprints with three claws. Note the apparent blood droplets at top left. Click images to see full size.
“I am not used to seeing the kind of tracks in my back yard like the samples I’m attaching here. Any ideas? Looks BIG. Gulp.”
So read the email I received last week from my close friend S. with 4 photos attached (the one above was also a Coast to Coast AM Photo of the Day on 1/27/11). He lives in Franklin County, Ohio near Columbus, works in a highly visible profession and is too shy to post these images himself — but he’s also alarmed by the footprints he and his wife found in their back yard last week after the last big snowfall. Knowing of my keen interest in the ridiculous-yet-hard-to-explain, he sent them to me.
He’s been perusing BFRO’s site for sasquatch sightings in his area looking to make some kind of sense of this, but to no avail.
“The right track has blood on it — the right foot seems to indicate a foot injury,” his email continued. “We are kinda freaking out. We have spent hours combing through wild animal track books, trying to isolate and identify the tracks, hoping to come up with an explanation. WHOA. Freaking.
S.”
He says the tracks crossed through his yard and stopped at a large tree. Sadly there was no shivering juvenile squatch hiding in the tree when he looked up — but then where did it go? Did it fly away? Jersey devil? Mothman? My two cents — these aren’t sasquatch, Jersey devil or mothman prints; they’re clearly dogman prints. Perhaps it leapt from the tree onto another tree or onto his roof (he didn’t think to look there for more prints) and was gone. (UPDATE 1/27/11: I just searched and found this regarding Ohio’s “Loveland creature,” a reptilian spotted in 1955 and 1972, so I’m switching my opinion from dogman to lizardman.)
They’re real. It’s not a hoax. Your theory? He’s open to your explanations.

Below, a purported photograph of a "Lizard-Man" from Kansas and I beleve there is supposed to be a video associated with this sighting also.