Selections from 'The Drake Manuscript'

I found this posting to have some items of a Cryptozoological interest. I did not include all the text or photos from the origial site but enough to give the general degree of accuracy and the flavour of the original document, and the most important entry last: 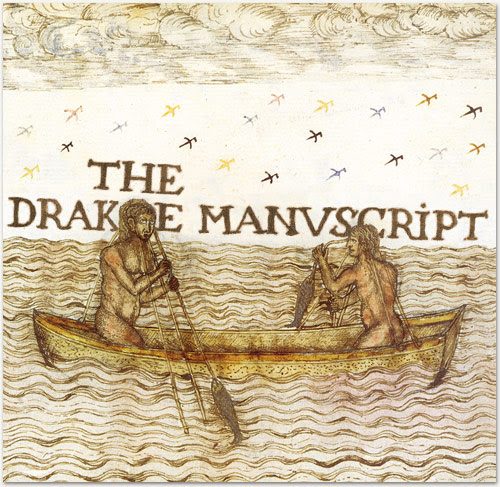 The Histoire Naturelle des Indes, created sometime in the 1590’s, is one of the earliest illustrated records of European contact with the America. Also know it by its informal title The Drake Manuscript it was donated to the the Pierpont Morgan Library in 1983, who after many years of study graciously produced a full color facsimile. I happen to have said facsimile, which was published in 1996, right here in front of me. Shall we take a gander?
First a few words on the manuscript’s origins and possibly misleading title.
The Drake Manuscript is named for Sir Francis Drake, the famed English privateer, navigator, slave trader, politician, and pirate of the Elizabethan era, whose travels it is thought to illustrate. Though Drake was himself something of an artist ⊕, the images in Histoire Naturelle des Indes were not created by his hand. Nothing of his artwork survives as it turns out.


The best guess as to the manuscripts origins are something along these lines-
The naive drawings ⊕ show signs of being created by several separate hands. Context reveals that these were likely the hands of Huguenots. Drake is known to have employed not only Huguenots on his voyages but artists as well. A “considerable number” of the images correspond to ports of call familiar to Drake, in some cases associated directly with his voyages, and Drake is mentioned by name, twice, in the manuscript itself. Hence, with a nice pile of circumstantial evidence to stand on, and no other clues, we have The Drake Manuscript.


Taken as a whole the images are an interesting mixture. The drawings of plants and animals are presented in a sort of cold practical manner, removed from their natural surroundings, with captions that read almost like a sales catalog, listing the virtues and drawbacks of each.  The drawings of the indigenous peoples themselves on the other hand are altogether warmer and seem to serve no greater purpose than curiosity. 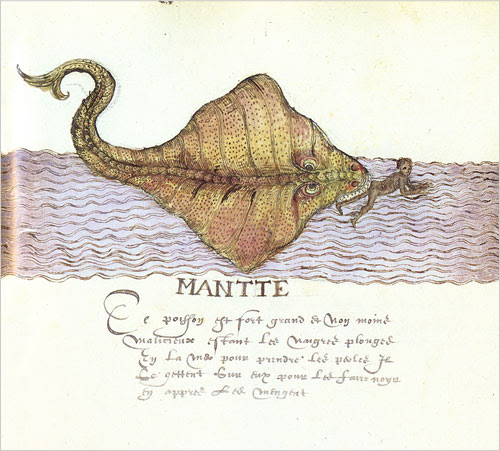 MANTTE
(Manta Ray)
“This fish is very large and no less vicious. When the negroes dive in the sea for pearls it jumps on them to make them drown and afterward eats them."

[It seems to be some other very large ray or skate, Since there is at least a hint of some sort of enormous Cryptid skate or guitar-fish in the Caribbean, said to have a shark's tail, this could be a representation of it-DD] 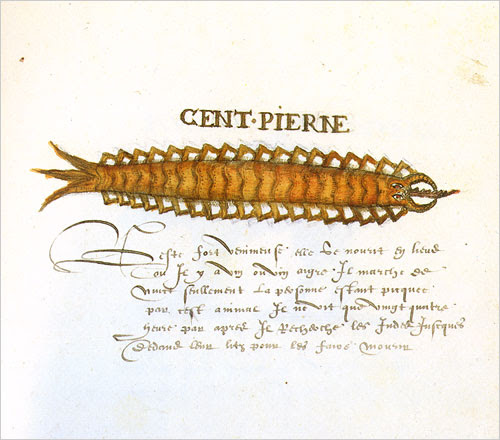 CENT PIERNE
(Centipede)
“A very poisonous beast. It feeds in places where there is wine and vinegar. It only moves around at night. A person who has been bitten by this animal lives only for twenty-four hours afterwards. It finds the Indians in their beds in order to kill them."

[This entry is a control. It is true enough to life, the centipedes are large and they are deadly] 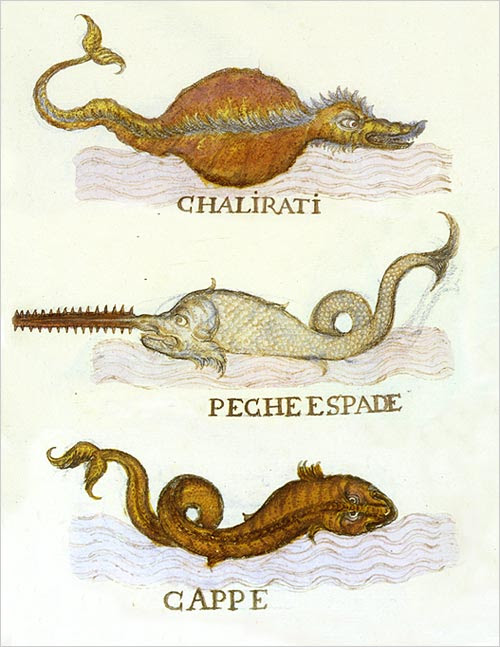 [If that eel is as big as a sawfish or a crocodile, that is no ordinary eel, it is a Megaconger-DD] 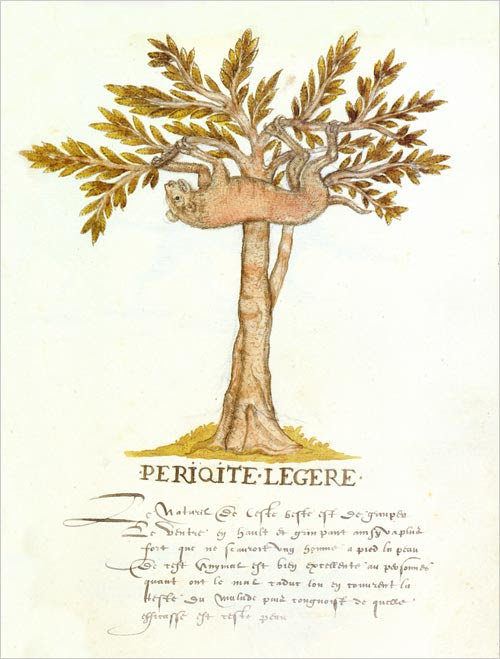 PERIQITE LEGERE
(Sloth)
“The nature of this animal is so to climb with its belly uppermost and, climbing this way, it moves faster than a man could on foot. The skin of this animal is very excellent for people suffering from falling sickness [epilepsy]. The head of the afflicted is covered with it then one realizes how effective the skin is."

[Although the intention may have been to show a 3-toed sloth, the nearest creature with a tail like it was a Ground Sloth and this just might be documentation of a late-surviving Ground Sloth done by the error of mixing the two things up. This could be a "Su Monster" in tree-climbing mode-DD] 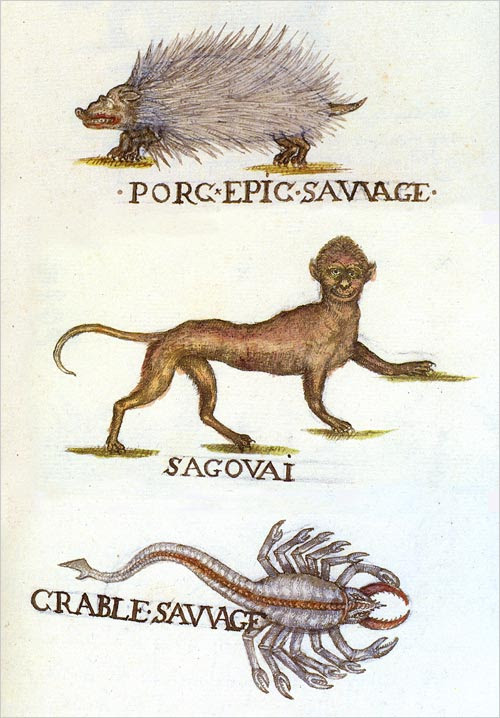 {Heads up to Jon Downes, this might be the West Indian Porcupine mistaken for the Chupacabras in the early 1990s reports! This also represents some unknown species of ground-dwelling monkeyparallel to a rhesus monkey-DD] 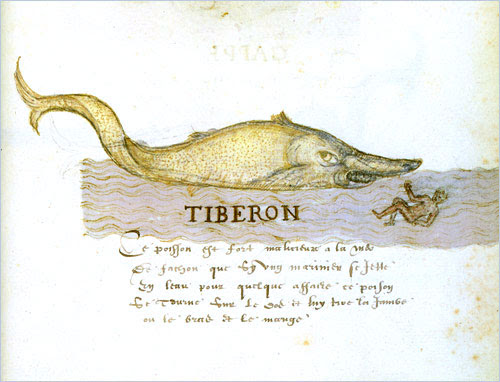 TIBERON (Shark)
“This fish is very viscious in the sea so that when a sailor throws himself into the water for some reason this fish turns on his back and tears out a leg or an arm and eats it."

[Another control entry, a man-eating shark. Incidentally, the name "Shark" is from the Mayan (Xoc) and circulated among the Pirates of the Caribbean-DD] 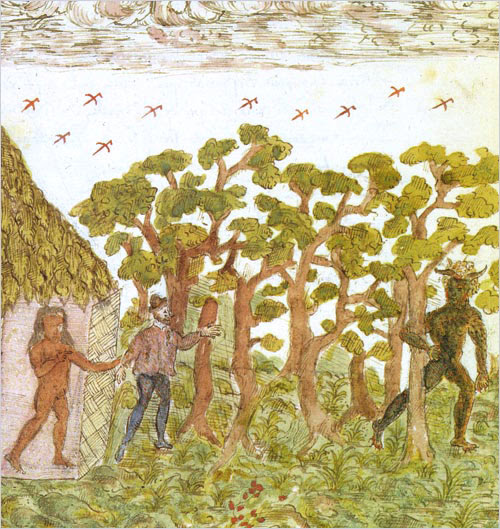 COMES LES YNDIENS ONT ORDINAIRM[ENT] DES JLLUSIONS DU MALING ESPRIT
(How the Indians Usually Have Visions of the Evil Spirit)
“The Indians are much tormented at night by visions of the Evil Spirit whom they call in their language “Athoua.” They do not dare leave their houses at night–only when light has come–and this is because they have no belief nor education and do not worship anything...”

Leaving off the sort of turban of leaves and sticks the creature is wearing, we have what is very likely the earliest depiction of a Didi on record and also very likely one of the best and most straightforeward depictions of the Wildman type, from any time, from anywhere in South America. As mentioned in the earlier blog posting under Maricoxi, for the most part most of the South American "Abominable Snowmen" seem to be of the one type which Ivan Sanderson called Neanderthaloid in his review of the Maricoxi proper, in the scientific journal Genus.

Concerning the images themselves it amazes me to look at them in the artistic context of their time, because though I undoubtedly find them beautiful, when I remind myself that they were created in the 1590’s, and that at that same moment El Greco, Rubens, and Caravaggio were all active… well it’s surprising. Thought of in those terms it’s a wonder these weren’t made by the “Indians” themselves.


-
For a bit more on the manuscript see-
The Morgan Library page
Histoire naturelle des Indes on Google books.
This pdf from the National Humanities Center.