[I thought the representations of Bigfoot faces made from impressions of videos taken in the Apallachian region were especially good and from the standpoint of classification of these creatures, I have nothing to add. My opinion already stated agrees with the conclusions made here-DD] 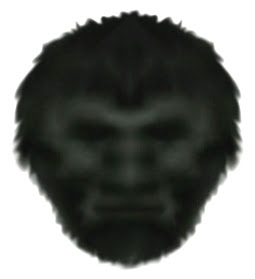 The two most common questions I get has lately are: Have you ever seen a Bigfoot and what do they look like? My answer is yes and just like us. The latter answer still startles many people who ask me this question, especially those not familiar with the recent developments in Bigfoot research. "But I thought it was an big ape that walked on two legs", is the response I usually get in return to that answer.

I have made eye contact twice and captured at least a dozen on video and they look remarkably "human". Mary Green took heavy criticism in the 80's and 90's because she was describing them with human features. The "old guard" had trouble accepting they did no look like a large ape.

It was not until David Paulides published his two books "The Hoopa Project" and "Tribal Bigfoot" that the Bigfoot world started rethinking what a Bigfoot actually looked like. David recruited Harvey Pratt, an experienced and nationally respected forensic artist. Harvey then interviewed witnesses and drew what they described without any interpretation. The results were ground breaking. David had applied good solid investigative methods to his research and the results were amazing images of what the Bigfoot actually looked like. To everyone's surprise and amazement they looked like US!

﻿
The general facial features vary depending on the region of the country the Bigfoot live in. In East Tennessee the Bigfoot generally have rounder heads, only a few have a "dome" or "crest". The noses are very human like in this area. Some are narrow unlike the flat wide noses described in other parts of the country. The mouth is wider than what we would consider normal. The teeth are square and human looking. I know that some Bigfoot have pronounced canines (as do some people) but in my experience I have not seen any with "fangs". The skin color is pasty gray or black with a leathery appearance. There are exceptions to this, I once captured a video of one with very light skin, and his face was remarkably human looking.

The major feature that is different from most humans and appears to be very common with the Bigfoot in my area is what we call the "Goggle Look". They have a pronounced brow and deep set eyes. This makes them look like they are wearing a pair of dark goggles. This feature is interesting and makes it difficult to see their eyes unless you are extremely close.


"Why do you think they look like us" is usually the following up question. In my area I think it is because of interbreeding with humans for hundreds of years. The Cherokee have stories of their women actually taking Bigfoot as husbands and bearing their children. Unfortunately it is my opinion that women over the past few centuries have been forcibly taken and children as well. I think they were integrated into the Bigfoot clans and as a result we have the more human appearance of the Bigfoot in this area of the country. 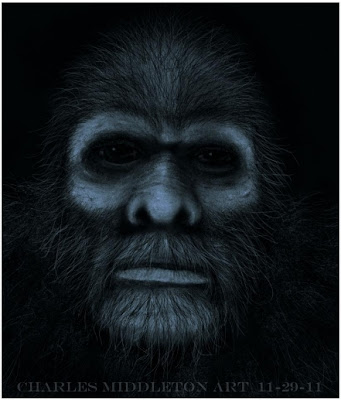 This Charles Middleton drawing comes very close to representing the general look of the Bigfoot in my area of the country.


In conclusion the Bigfoot are each unique individuals. Their facial features vary but In general have a remarkably "human" quality about them. That is why I say, we have met the Bigfoot and he is us.


Below is a drawing I made based on both my eye witness encounter and video captures. I believe this to be a young female that I call "Scout". She showed herself to me briefly and we made eye contact back in 2010.

Posted by Scott Carpenter on the same blog under "Signs and Wonders":

This one has facial features reminiscent of the "Minnesota Iceman"
Posted by Anonymous at 15:12 1 comment:

I am back from the hospital and I do not have cancer, but my health concerns are not over yet. It shall have to be a little while longer before normal fuctioning of the blog shall resume. In the meantime it seems my blogs are being targeted for spam in the comments section and I might just have to jetison everything that is still pending.

Best Wishes, Dale D.
Posted by Anonymous at 04:45 No comments:

Unfortunately I am experiencing some rather severe health concerns at the moment and I shall be undergoing tests and new treatment plans for the near future. This shall mean that my blogs shall have to go on hiatus for the duration. I apologise for the inconvenience, but it cannot be helped. It is in part the direct consequence of being on the computer day and night over the past six years or more.

Originally submitted to Coast to Coast AM with George Noory in 2005.
My name is Bill Dayholos. I’m 53 years old and and call Manitoba, Canada my home. I subscribe to your Streamlink and have enjoyed listening to your program for 10 years now. I have been a Remote Viewer for 9 years now, all starting form one of your shows that introduced it to me six months prior. I’m currently writing a book on my research with Remote Viewing and other tools at my disposal. I have been actively researching a 5000 year old native site here in Manitoba.
Upon making trips into the remote archeological site I found myself crossing the path of a strange creature call sasquatch. My experiences with this creature allowed me to access it via Remote Viewing, which revealed a lot of interesting information about "its ways". This includes a model for communication between the species. I have been sculpting for three years now and during Remote Viewing sessions of watching two different sasquatches I decided to sculpt one of them.

I had seen the examples of other artist renderings and was not impressed by most images showing them as evil beasts. The one I became familiar with is very soft looking and appears gentle. She is very old and has gray hair. The famous Patterson film shows a black sasquatch with long hair on its brow. I have watched for this many times and there is very little on the one I sculpted, if it is there, it is very short and dense. I also believe that it could be because of her age.

It has been recognized that there are more than one species (east and west ones) in North America. I believe this and also believe that there are regional and "family" differences in appearances. The bust shown is 10 inches high and my next sculpture is R V’ing Cleopatra. It will not be finished for a few weeks but you can see it after it is done at dragonfly-studios.ca. I also found it quite synchronistic that when I was sculpting the sasquatch and listening to your program at the same time someone phoned in and asked the guest if anyone had remote viewed a sasquatch.

About the Author
Bigfoot has written 105 stories on this site.


--In this case although the artist called the sculpture a remote viewing, I think in more practical terms we could call it an artist's impression based on the local media descibing Bigfoot (although not consciously remembered and recalled as if a "Psychic impression") in other words I find this to be a good artistic impression in agreement with other individuals of the Eastern Bigfoot type.

My own destroyed clay bust was something I had a drawing of, though, and here is a copy that I had sent to the SITU around 1982 (later returned to me), scanned and coloured over again (because the scan destroyed all legibility of the colours)

Alex Evans just came out with a Bigfoot bust which she is offering commercially. The bust would count as her impression of the many reports in the area in and around Indiana and Illinois. I am adding that part in here because it seems to me that both busts are trying to express approximately the same sort of facial anatomy.The primary difference would be that Bill Dayholos was trying to represent a female with a thin growth of fine hair and Alex Evans was representing a male with a full coat of coarse hair and a large beard that runs into the chest hairs. That last description is rather common for the Eastern Bigfoot. This is what Alex has posted on her facebook wall:


The size of these sculptures is a nice size for a shelf or desk being 7 1/2" high and 9" across. The width is 5 1/4" They weigh approx. 6lbs also. If someone would want a wooden base, let me know and I can have one mounted atop a stained and finished base for you.......a bit more but if it's what you want, we can get it for you!

This brown Sasquatch is made from an original I sculpted and I am offering them in different colors/finishes. They will be a limited edition of only 250 made, signed and numbered by me. Since they are hand painted individually, no two will be exactly alike. I am offering a few color combinations and for an additional fee, can customize one for you in your face/hair/eye colors. They are made in the U.S.A. and are of a high quality poly resin. For now the cost is $148 each (plus shipping). Message me with any questions, I have more views of each of them and will be adding more : ) Thanks for looking at my sculptures!

Posted by Anonymous at 19:34 No comments:

MK Davis just added this video to his YouTube account, saying that it represents a young Bigfoot climbing around in a tree. Video footage with enhancement and commentary:

Caught in the low light of a setting sun, an alleged juvenile Bigfoot scampers up a tree and spends a raucous moment in front of the camera. M.K.Davis analyzes the short clip and provides commentary for it.  Standard YouTube License,

Thanks for all﻿ you do MK!

Do you know the year and﻿ location of the video? Many thanks


--After close viewing of the video I feel that the creature  is about the same general appearance, size and body conformation as a chimpanzee, comparable to "Cheetah" of the movies, and makes similar noises. Chimpanzees also shake the trees like that when annoyed. HOWEVER, I am not opposed to the idea it might be the young one of the same type as the "White Bigfoot" in MK Davis' other video analysis posted here earlier. It would be a better situation if we actually had a better view of it. As far as I can tell, though, it has the small head, barrel torso, overly-long arms and short bowed legs of a Chimpanzee. It is also dark in colour.

Posted by Anonymous at 20:17 No comments: