Above is a facial portrait and below is a footprint of the Eastern Bigfoot, which is often compared to a "Caveman" in appearance. The term Eastern Bigfoot has been used since the 1970s to discriminate the type, although there are problems with using that term since it has also been applied to the more apelike Skunk Ape (see below), with equal vigour and for about the same length of time.

The footprints and build of this creature (Which I call the American Almas) are very much like Neanderthal fossils and so is the shape of the skull, face and braincase. They are burly creatures built like old-time professional wrestlers and with short bandy legs. Their arms turn out to be not particularly overlong in comparison to Caucasian Homo sapiens, but both hands and feet are large enough to seem outsized. Both hands and feet are squared-off in appearance. The top of the head is usually domed rather than peaked and one gets the impression of a head distinct from the shoulders

The following photo is from Ohio and if genuine it would be one of these Eastern Bigfoots.
It seems to be running with unusual vigour and it has been suggested it would not be possible for a man in a suit to perform this action at such a great speed. The proportions look human enough.

Eastern Bigfoot drawings from an article posted on the blog recently.
The profile is similar to the famous "March of fossil humans" from the Time-Life book Early Man.
The head-on view is a close match for the "Mecheny" Almas seen in Siberia.

Two peculiarities are associated with the American Almas males: the first is that the crown of the head can have thinning hair, or be partly to wholly bald on top; the second is that they can have beards and moustaches ranging from just noticeable to full-beard-hanging-to-the-waist.

Whether or not these photographs represent real creatures, they DO represent what the witnesses are reporting. These reports do continue more rarely out to the West Coast, and then there are areas both in Northwest Canada and then again in Mexico and points South where they are counted as specific regular types reported in those areas. In Northwest Canada they are the BushMen and in South America they are the Didis and Maricoxis.

Blogger Jay from the companion blog Bizzare Zoology sent in this illustration tpo my Facebook wall. He said the "Wild Woman" illustrated on the house pole could be meant for one of my American Almases and he pasted the skull alongside for comparison. It looks like a good match to me.

Further to the south there are what Sanderson called The Little Red Men of the Bottomlands (or of the Mississippi delta) and wondered if the reports could be related to runaway orangutans (in 1961): soon after that, "Skunk ape" reports started coming in from Florida

There was some variation overall in the kind of apes they were said to look like,chimpanzees were alleged almost as commonly as orangutans. And yet the striking similarity to orangutans insited on  in all of the best reports and shown in photographs is very hard to discount or to overlook.

Fangs as illustrated on an internet Skunk Ape site

Large Apelike creature on the loose as shown on Fox News and illustrated on the Cryptomundo site.
Below, Illustration of a "Sasquatch" actually based o Skunk Ape reports. The Skunk Apes can walk weither bipedally or quadrupedally on the ground, and it does seem they do so more frequently than normal apes usually do.

Apelike Category Tracks
Upper Left Himalayan "Yeti", Upper Right Orang Pendek from Sumatra
Lower Right Chinese Yeren, Lower Left from Pennsylvania
There is a great range in track shapes depending on how closely the big toe is clenched to the foot

Footprint cast for the Skunk Ape: in this example, the two smallest toes seem to have run together in casting. These tracks characteristically show an opposed big toe: more recently they are often said to resemble the Orang Pendek tracks from Sumatra and lately publicised. Below is a comparison of the-is kind of "Bigfoot" with the typical (Smaller) Yeti from the Himalayas. A close match in proportions and stance.This type of Yeti is ordinarily said to be the size of a teenager or a young man for the males, females much smaller.These Yetis typically live at lower altitudes in the jungles (where they are known under different names) and only rarely go over the mountains when they need to get from one valley to another, and that most likely because of feeding patterns and population pressures.

Above and below, Witness' drawings. The typical West Coast Sasquatch
has a small pointed head which does not have a distinct neck or separation from the shoulders visible
Both arms and legs are thickly muscled and the hands reach as far down as the knees.
The eyes are small, round, dark, and placed close together, nose is flat and the ears are rarely seen.

Artwork from Utah Bigfoot site, above and below
Traditional Representations of Sasquatch on border below

"Peter O, Hoot" above and "Peter O, Staredown" below. 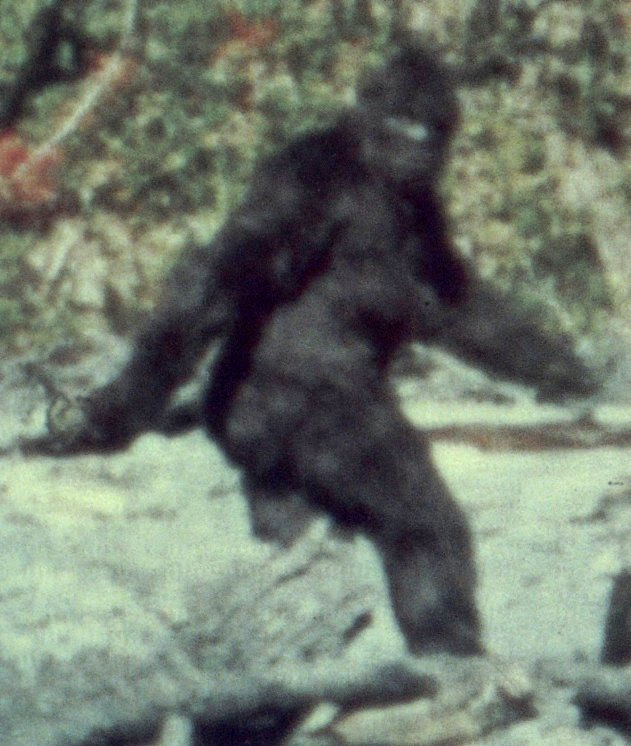