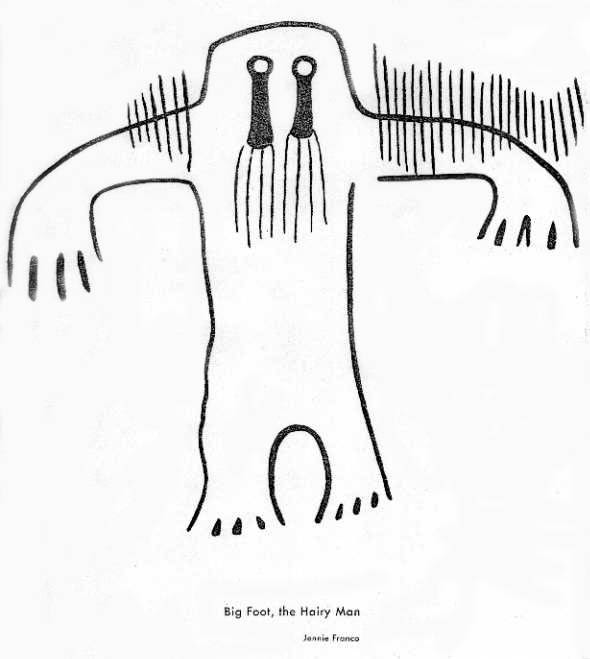 Many of you are undoubtedly familiar with the legends of Bigfoot and all of his ape-like kin who are reported to dwell in the numerous remote wilderness areas and swamps throughout North America. These vast areas where man seldom treads provides a perfect refuge for these creatures where food and water are plentiful and protection from the elements can be easily attained.

It may come to your surprise that the legendary monster is also a desert dweller as well.

As hard as it may be to fathom there are many reports from the vast deserts of Southern California of Sasquatch-like creatures roaming the sand, much like they do in the lush forest. These very dry areas with little vegetation, and almost no water supply would seem like the last place that a 6-to-10-foot-tall animal that weighs upwards of 400 pounds, and not to mention is covered with thick fur, would want to call home, yet the sheer number of Bigfoot sightings in these areas are too numerous to ignore.

In the late 1960's reports of Bigfoot sightings in the desert towns of Lancaster and Palmdale reached a feverish pace that lasted well into the 1970's, then tapered off. Though these areas border on the Mojave desert, they also border on the Angeles National forest, so it wouldn't seem to unlikely that the creature could have been lured out of the wilderness and into the desert for some unknown reason.

More bizarre are the stories that have surfaced from nearby Edwards Air Force Base, that is farther inland and farther from the forested areas near Los Angeles, of frequent intrusions by creatures that match the description of Bigfoot. As the story goes, Base Security is in possession of several surveillance video tapes that plainly show giant, up-right, apes trespassing in the numerous underground tunnels under the facility. How, or where, the Bigfoot break into, or gain access to these tunnels has never been revealed, obviously for security reasons, but reportedly these incidents happen rather often, and are a nuisance.

The Mojave Desert and Death Valley are two of Southern California's more famous barren areas, but there is also a stretch of inhospitable desert that stretches from the Mexican border northward to the edges of the San Bernardino mountains. This area to has had it's share of Sasquatch sightings over the decades, and this is the area I wanted to focus on today.

The desert wilderness of the Anza-Borrego area has been home to many a tall-tale and several strange events over the past several hundred years. Many a desert rat has emerged from the region with tales of a mysterious Spanish ship filled with pearls inexplicably marooned in the sand, or of a Viking boat embedded in the rock, strange lights in the night skies, and most commonly, of vast quantities of gold just waiting for some lucky prospector to cart out.

It was undoubtedly the lure of these reported gold deposits that first lured the white man into this desolate area and it is from one of these fortune hunters that the first report of Bigfoot, or the Borrego Sandman as it is known in these parts, came. Reportedly in 1939 a prospector, who when interviewed in the 1970s wished to remain anonymous, was attacked by a large group of upright-walking-apes as he camped near the Borrego Sink. The frightened man described the creatures as very large, covered in white fur, with glowing red eyes. The only thing that saved the man from the attack was the fact that the monsters were afraid of his camp fire.

Another report of giant footprints from that same general area came from a man named Victor Stoyanow in 1964. His story was retold in a famous article in SAGA magazine entitled, "America's Terrifying Woodland Monster-men" in 1969. The piece also featured the story of Harold Lancaster, a miner who encounter the Sandman in 1968. Here is an excerpt:

Gold prospectors and treasure hunters frequently seek their lost bonanzas in isolated areas. Since 1964, treasure hunters in the Borrego Valley desert in California have whispered about "the Abominable Sandmen of Borrego." The arid area is near the Mexican border, it is virtually uninhabited. There are many fissures, caves and crevasses in the Superstition Mountain region and prospectors say the Cocopah Indians have told of a subterranean labyrinth under the mountain, Maj. Victor Stoyanow was seeking an access into the Superstition Hills in January 1964, when he noticed large, humanoid tracks in the sand dunes. "The prints ran in pairs, generally parallel and averaged about 14 inches in length and nine wide at the instep," Major Stoyanow declared. He returned to the desert on several other occasions, made plaster casts of the prints, and snapped photographs."Curious as I am, I hope that the person who discovers what kind of beast it is doesn't happen to be me." Major Stoyanow said after his thorough investigation into the tracks.

The San Diego Union ran an unverifiable article some years ago of a "sandman" that was shot by hunter Frank Cox at Deadman's Hole, near Warner, California in San Diego County. The beast was described as a cross between "a man and a bear." The head was rather small, with protruding teeth and powerful jaws. The muscular creature had feet that measured 24 inches in length and the body weight was estimated to be 400 pounds.Harold Lancaster, treasure hunter, was prospecting in the Borrego Sink, east of the settlement of Borrego Springs. California in July 1968, when he saw a "sandman." "I was camped up on a mesa one morning when I saw a man walking in the desert," he reported. "The figure came closer. I thought it was another prospector. Then, I picked up my binoculars and saw the strangest sight in my life."It was a real giant apeman," Lancaster said. "I had heard about the screaming giant apeman up in Tuolumne County that frightened people for a couple of years. Another person and I even went up there to look for the thing. I decided it was a hoax and never expected to actually see one."

As the "sandman" drew closer, Lancaster became worried. "That thing was big. I was no match for it," he reported. "I had a .22 pistol on my hip but it would have been like shooting at a gorilla with a pea shooter. I was afraid the beast might get too close. So, I fired a couple of rounds into the air. The sandman jumped a good three feet off the ground when the sounds of the shots reached him. He turned his head, looked toward me and then took off running in the other direction!"Why didn't Lancaster shoot the alleged sandman? "I was afraid," he admitted. "They should be protected. They're a form of a human, a primitive species. It would be murder to kill one. They should be studied."

Reports from the area continue to this day. In 1998 some hikers discovered a set of strange footprints near Boundary Peak, close to the Mexican border. Likewise in 1993 a hiker saw a Bigfoot, um ...... using the restroom on the La Jolla Indian Reservation. Reports have also surfaced from military personnel at Camp Pendleton who had encounters with the creature while on maneuvers during the 1960's and 1980's.