From the above named article:
“Evidence that Venezuela was the cradle of civilization is offered in a volume on his archaeological discoveries which is being published by Dr. Rafael Requena, private secretary to President General Gomez. The publication of this book will lift the veil of secrecy which has shrouded Dr. Requena’s discoveries since they were announced briefly a year ago.
Most startling among the relics unearthed by Dr. Requena from the ancient tombs that dot the shores of Lake Valencia are images of pre-historic animals.


Among these, well sculptured in clay and kiln baked, are models of the diplodocus, a four footed monster with a goose-shaped body, surmounted by a dorsal fin, the neck of a giraffe and the jaws of a crocodile; a gliptodante [glyptodont], a squat four-footed beast with a hideous frog shaped head, bulging eyes and two rows of humps along its back; the prehistoric marine turtle and its equally great land-loving brother and carved from stone, the head of a hadrosaurus.

Photo:Closeup and comparison of one of Requena’s sauropods. From photo at top of page.

The same web page indicates that scuptures similar to this in the Mississippian Mounds of the Missippippi delta -Below.

In this case, there is once again very little difference between the "Sauropod Dinosaur" depictions and the more usual Plesiosaurian Water Monsters (Which in South America means in particular the "Patagonian Plesiosaurs") See the map below:

The five pointed stars in a bundle on the Bolivian border represents an area where there are continuing traditions and reports of "Diplodocuses living in the swamps" much the same as the African Mokele-mBembe, and similarly probably just the same Longnecks as described elsewhere
The following excepts quote mainly from George Eberhart's Mysterious Creatures (2002):

A few rumors of huge, amphibious beasts in South America are on record, but no local Indian names have surfaced. In 1882, an odd, 40-foot saurian was killed on the Río Beni, El Beni Department, Bolivia. It was said to have two additional, doglike heads (Probably added on by taxidermy) sprouting from its back, a long neck, and scaly armor. “A Bolivian Saurian,” Scientific American 49 (1883): 3.

The explorer Percy Fawcett mentioned dinosaur- like animals briefly on several occasions as occurring in the Río Guaporé area on the border of Bolivia and Brazil, in the Madidi region of La Paz Department in northwestern Bolivia, and in swamps around the Rio Acre in Acre State, Brazil. Percy H. Fawcett, Exploration Fawcett (London: Hutchinson, 1955). Leonard Clark heard rumors of an animal resembling a sauropod dinosaur from Peruvian Indians around the Río Marañón, Peru, in 1946. Leonard Clark, The Rivers Ran East (New York: Funk and Wagnalls, 1953). In 1975, a Swiss businessman hired a seventy five- year-old guide named Sebastian Bastos, who told him that the Amazonian Indians knew of animals 18 feet long that overturn canoes and kill humans. Bastos himself had survived an attack several years earlier. Liverpool Daily Post, January 3, 1976. [The 18-foot-long creature is evidently "A Kind of giant fish"  (a toothless shark or catfish) according to a different mention by Fawcett-DD] 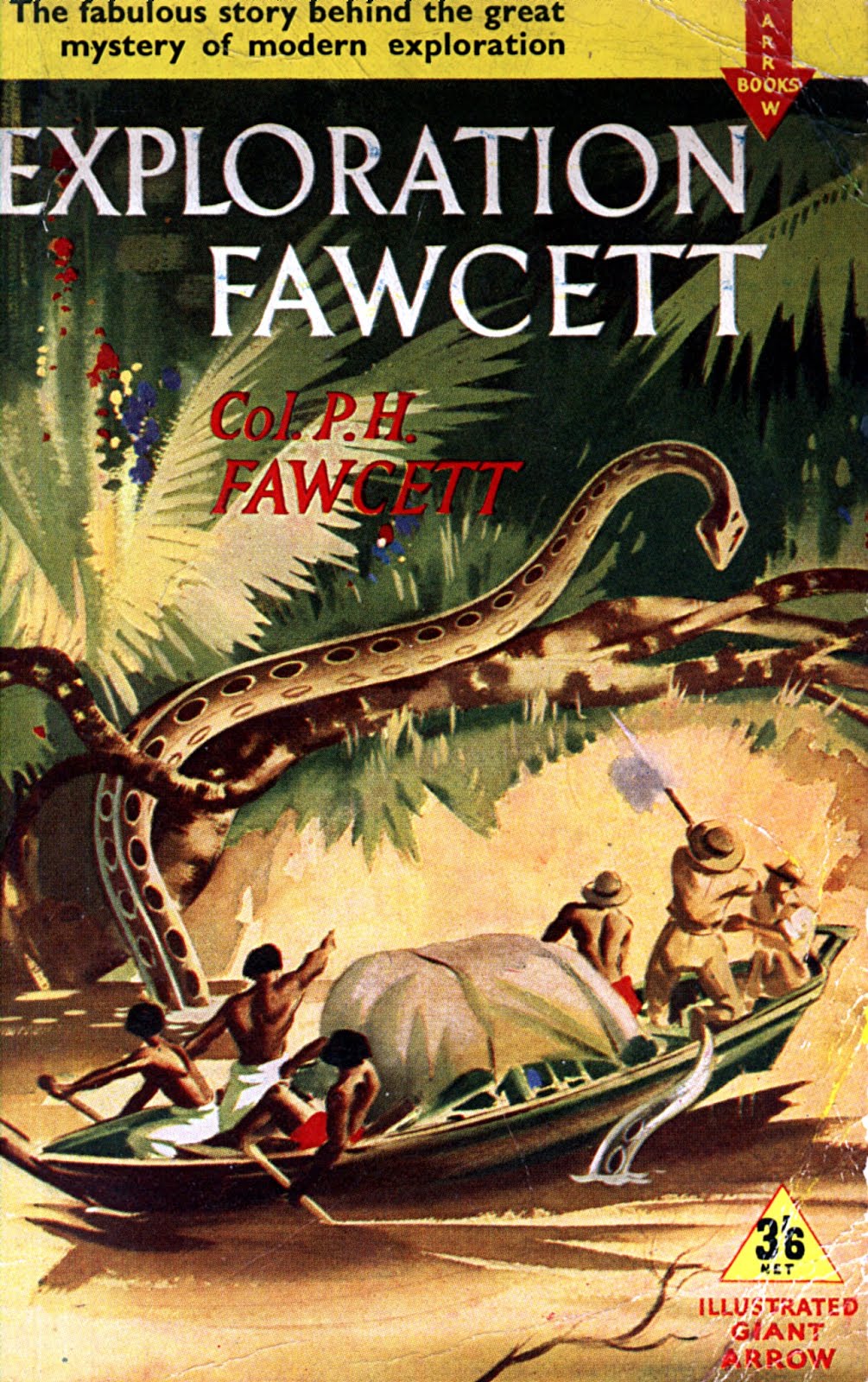 As a parallel quote we can quote from our good friend Tabitca
http://cryptozoo-oscity.blogspot.com/2009/05/bolivian-and-south-american-living.html

In 1931, Harald Westin reported seeing a creature along Brazil's Rio Marmore . He said it was 20-foot long and resembled a 4-legged boa constrictor. Leonard Clark reported that he heard tales when travelling up the Rio Perene in Brazil and was told of herbivorous creatures which sounded much like a prehistoric Sauropod. . "In 1907 Lieutenant-Colonel Percy Fawcett of the British Army was sent to mark the boundaries between Brazil and Peru. He was an officer in the Royal Engineers and was well known as a meticulous recorder of facts. In the Beni Swamps of Madre de Dios Colonel P. H. Fawcett saw an animal he believed to be Diplodocus... The Diplodocus story is confirmed by many of the tribes east of the Ucayali..." (The Rivers Ran East by Leonard Clark, 1953.) Then in 1975, a Swiss businessman was told by a guide called Simon Bastos, about such a dinosaur like creature. The long-necked creature had destroyed Bastos' canoe after he had landed along a riverbank. Bastos was later told that such long-necked creatures frequented deep waterholes, and rarely came out on land.
All hearsay and inconclusive and the report in Scientific America was later thought to be a hoax.[or better, "Is currently thought to be a hoax by all serious researchers"]

Chan Freshwater Monster of Mexico.
Physical description: Like a sauropod dinosaur.
Distribution: Lago La Alberca and neighboring lakes in the Valle de Santiago, Guanajuato State, Mexico..
Present status: Photographs are likely hoaxes. Every September, the locals, who consider the monster a god, offer it gifts. Sources: Leopoldo Bolaños, June 15, 1998, accessed in 2001, http://www.fortunecity.com/ roswell/daniken/62/invest.html; John Kirk, In the Domain of Lake Monsters (Toronto, Canada: Key Porter Books, 1998), pp. 209–211.
[The name Chan or Kan is not mysterious, it means just "Snake" and it is the last syllable in the name Kukulkan, the Mayan name for Quetzalcoatl-DD] 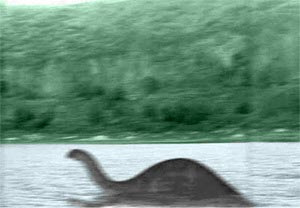 The photo was taken from a plane in Mexico back in 1956.
The pilot claims that this was a large animal but within the photo itself there is nothing to give it scale–plus it’s blurry. This photo has been analyzed over and over–some think its an elephant, but no elephant should have been there either. Color was added to the background to aid the contrast between the object and the background in this faded image.
[This has been reproduced several times and attributed to different lakes, including in  Africa. It is almost certainly a hoax photographing a small model against a painted backdrop-DD]


Patagonian Plesiosaur
FRESHWATER MONSTER of Argentina.
Physical description: Long neck like a swan’s, held high above the water. Behavior: Nocturnal. Can travel on land. Distribution: The lake region of Chubut Province, Argentina, including Lago Blanco; the adjacent region of Chile. Significant sightings: The director of the Jardín Zoológico at Buenos Aires, Clemente Onelli, interviewed a farmer who lived on Lago Blanco in 1897 about strange, nocturnal noises heard along the lake’s pebbly shore. A longnecked animal could sometimes be seen on moonlit nights. On October 18, 1921, prospector Martin Sheffield came across the tracks of a large animal west of Esquel, Argentina, and followed them to an unnamed mountain lake where he saw a plesiosaur- like animal swimming. Onelli organized an expedition, led by José Cihagi and Emilio Frey, that set out to investigate these reports on March 23, 1922. On April 18, despite some bureaucratic problems with permits, the group reached the lake where Sheffield had seen the animal but did not find anything (despite setting off some dynamite in the lake); the group was forced to return to Buenos Aires on April 26 before the southern winter set in. Possible explanation: The Giant otter (Pteronura brasiliensis) is found much farther north, though there is a historical record of its existence from Uruguay. It grows to a length of 6 feet,[without] including the tail. Sources: “Sees Monster of the Reptile Age Swimming in Patagonian Lake,” New York Herald, March 7, 1922; “Not Worried about Mesozoic Monsters,” New York Herald, March 8, 1922; “Protests Capture of Andean Monster,” New York Herald, March 13, 1922; “En busca de la ejemplar vivo de la Epoca Secundaría: El Plesiosaurio,” La Prensa (Buenos Aires), March 13, 1922; “Argentines Start to Catch Monster,” New York Herald, March 24, 1922; “Was It a Hoax? End of Plesiosaurus Hunt,” River Plate Observer (Buenos Aires), May 12, 1922; Leonard Matters, “An Antediluvian Monster,” Scientific American 127 (July 1922): 21; Peter Costello, In Search of Lake Monsters (New York: Coward, McCann and Geoghegan, 1974), pp. 237–244.

[As noted on an earlier blog, the common historical Latin-American reference to such creatures is by calling them "Culebron" meaning Snake or Dragon.-DD]