Capture of Gorilla in Kentucky, 1892

The April 2, 1892 issue of the Toledo Bee newspaper makes front page mention of a wild monster having been captured in the woods downriver from Brandenburg, Kentucky. At first, the article simply calls it a monster, but then calls it a gorilla. Was it a gorilla? It would seem so, however...

The description of this beast says it was fully seven feet high, had hands and feet, not paws, and was sought for because it had been eating dogs and calves around Meade County. Gorillas are primarily herbivores, and have never been known to seek or hunt down meat for food. Further, I have not been able to find a source that claims any gorillas to attain a seven foot height, and that even six feet in height would be a rare occurrence.

The big question is, how exactly did a gorilla come to be roaming around the backwoods of Kentucky, chasing down dogs and cows, especially in the year 1892? Is it possible that this story instead tells of the capture of what we call a Bigfoot today? And if so, what happened to the creature after its capture?

An interesting side note here is that my research efforts brought to light a brief piece from a 1962 newspaper that plaster foot castings made by a six foot tall, black hairy ape-like creature that had been reported in the Bedford, Kentucky area. As the crow flies, this wasn't all that far from where the beast in the article was captured in 1892. Was this a descendent?

Follow along as Bigfoot Tales shares the story of the Kentucky Bigfoot capture!

And for more on Maine Bigfoot research, please visit:
http://tech.groups.yahoo.com/group/Ma...

Above and below from Mysterious Kentucky. Track Casts above include the Human-like and more apelike track casts, the apelike footprint is something like 8-9 inches long with an opposed big toe, and a  fistmark behind (indicating knuckle-walking) about 4 inches wide, both fore and hindfoot are within the norms for orangutan except the sole is held flat (Atypical in modern orangutans)

Above, two very different types of Bigfoot heads as specifically apelike an "Caveman" types
Below, full-length drawing of the more human type of Bigfoot sighting and then two larger drawings of the two head types again.  Materials from the Mysterious Kentucky website 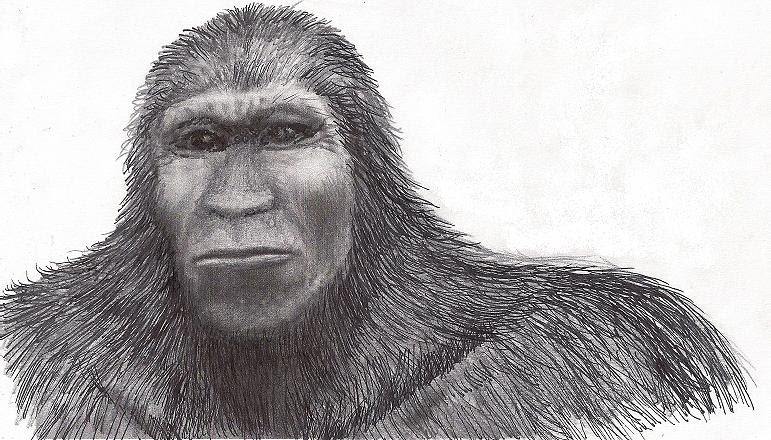 Google Photosearch
Posted by Anonymous at 05:57