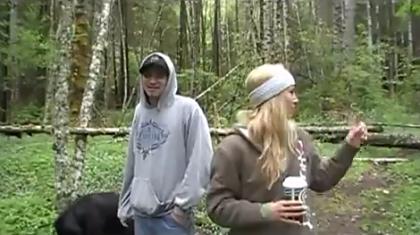 Bigfoot experiences are on the rise. Four that I know of in the last week. Maybe the Bigfoots are becoming more active, maybe more people are spending time outside. Last week, May 22,2013, my good friend Rene, her neice Ashlee and neighbor Korey came up to camp out in my yard. Before I arrived home, they went for a walk up the trail. They had quite an experience. They heard strange owl like calls and chatter. Some of this was recorded on a cell phone. Later, when I arrived home, we all heard a single whoop from across the river. After dark, we all went back up the trail. Although we heard nothing more, Gabby was very agitated for most of the night.

[I have several recordings on discs of Alleged Bigfoot vocalizations from the Eastern USA, mostly from the mountainous regions, and I can vouch for the fact that many of the vocalizations sound exactly like the sounds you hear coming from a chimpanzee. -DD]
Posted by Anonymous at 18:39