I just received an email asking for information about the "Texas Big Birds" seen in the later half of the 1970s. Here is an excerpt of my reply.


NOW THEN: it turns out that some Texans of Mexican descent killed and buried one of the birds at the time. The remains were later exhumed and proved to be thiose of a California condor.[That was according to a filler article printed in the Indianapolis Star some years later on-DD]
That being said, at the time there were all sorts of sightings of "Texas Big Birds" at the time, and the category included sightings of giant bats the size of a small human (Child or dwarf) which we later got to hear much more about as being a subsection of "Chupacabras" reports. There wereports of the "ordinary" Big Bird type, with about a ten-foot wingspan and answering to the description of a condor, and then there were "extraordinary" Big Bird reports that described condor-like birds at double those dimensions, which included reports of feathers, droppings and tracks. The tracks were a foot long, three-toed with no spur in back, the wingspan of the bird in flight about twenty fet across, and the birds standing on the ground were at least the size of a tall human with the head the size of the skull of a horse with the added feature of a hooked beak on the end (Description repeated more than once)
And then again you had "Pterodactyl" reports, and the added finding that you could have two witnesses standing together and looking at the same thing: one will describe a bird with feathers and the other will describe a Pterodactyl.

http://www.abovetopsecret.com/forum/thread315913/pg1
Here is some information from the "Above Top Secret" message board that should be of interest:

More sightings of a huge flying creature, originally reported by KENS, have prompted an investigation to determine if it is a monster or myth.

"Even though it was dark, the thing itself was black. The blackest I'd ever seen," said Frank Ramirez.

Years ago, Ramirez thought he was after a prowler in the back of his mother's Southwest Side home. But what greeted him on the garage rooftop still gives him goosebumps now.

"That's when the thing up there turned to me, and it was in a perched state, and it started to turn," he said. "It started to move its arms and this giant blackness was just coming out. At that point, I dropped the stick and I ran."

Ramirez sketched a drawing of the large, bird-like creature. The image is disturbing, and similar to dozens of sightings across San Antonio and South Texas.

"If you were to take a man's face and pull his chin down, just like a stretched face," said Ramirez.

"I was just terrified and as I was running. I just thought it was going to carry me off or something."

An earlier KENS story about a large, prehistoric-like bird drew more than 100,000 hits on MySanAntonio.com. More than a few people in San Antonio came forward to say they'd seen the creature, too.

One woman contacted KENS by e-mail, saying that because of our story, she now knows she's not crazy.

"When investigating mystery animals, it's important to point out that there are vast areas of land, even here in South Texas, that remain uninhabited," said Gerhard. "If an animal like big bird does exist, it certainly needs some habitat, somewhere to hide."

The Laguna Atascosa National Wildlife Refuge has 88,000 acres, and the marshes and prairies are home to 413 species of birds, but no flying pterodactyls.

"Raptors of all kinds, from hawks to falcons, come throughout. Our most common is the Harris Hawk, " said Park Ranger Stacy Sanchez. But even Sanchez admits that blogs spiked with reports this summer of something.

"People were posting about a very large, raptor-like bird, and they were talking about an 18-to-20-foot wingspan. I don't know ... It's kind of a myth," said Sanchez.

Critics say where's the proof? Eyewitness testimony without a feather or other body of evidence leaves these stories as they are — just stories.

"We know that it's rare, and we know that this area's been pretty popular hangout in the past," said Gerhard.

Gerhard has been installing cameras in Harlingen, where Guadalupe Cantu wants his big bird sighting documented and validated.

Back in San Antonio, Ramirez has mounted an outdoor light to keep the creature at bay.

"I know what I saw. It took me more than a week to step out of this house. I wouldn't step foot out of this house," said Ramirez. "It had this very, very horrible demeanor-look on its face. Like I was lunch," he said.

On Nov. 21, Gerhard will be featured in a History Channel documentary called "Birdzilla."

The description given by the guy who saw it just a few meters away actually reminds me of the mothman. How can a bird have a human face?
reply posted on 17-11-2007 @ 07:05 AM by Opulisum
Sounds like a case of the thunder birds, damn, as big as planes?


"Back in San Antonio he says it's not a camera his family has mounted, but a an OUTDOOR LIGHT!!!"

I live in a SA and the whole thing is derived from a S. Texas/Mexican-American urban legend.


The "creature" is called "La Lechuza" in spanish. Kens 5 (CBS affiliate) also aired a special about the chupacabra about a week ago.

The only thing i can remember as "bird with a face" is Harpys:
en.wikipedia.org...

This definitely sounds like the Mothman, I just dont know about the human face thing. It's kinda creepy though, I would hate to see that thing whenI'm taking the trash out late at night!

I thought it might be interesting to note that the sketch of the creature on the roof with the elongated face is actually quite similar to how a vulture's face appears head on, beak facing downwards. If it were, in fact, some sort of large bird related to a vulture (such as teratornis), I could see how it might look like an elongated human face.

Notice the positioning of the eyes, and nostrils. 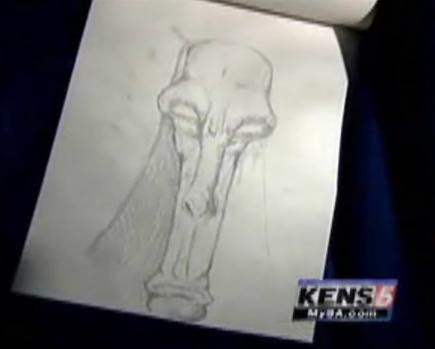 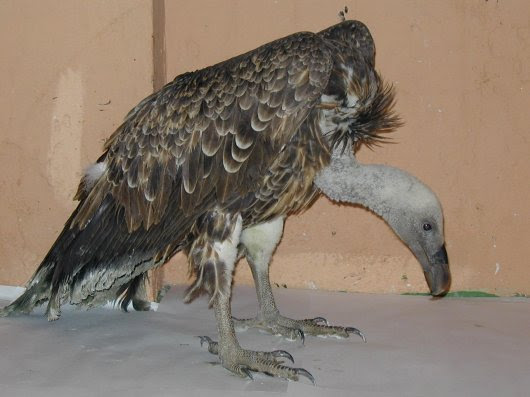 Also, could have been a regular vulture. They are quite large.

Well, I was going to paste an old picture of someone holding up a young stretch-faced bird that was caught in the early 1900's but I can't figure out how to put it from my hard drive onto here. Anyone know how? scottharriger(at)yahoo(dot)com. thanks. Scott

Replies are noted as posted by members of AboveTopSecret.com
(Unless otherwise noted, photography and other artwork linked within member posts are subject to the usage rights of the individual owners of the linked artwork.)


I thought the solution to the "Face" part was quite clear and simple: It IS the face of a condor, seen from above, which would be an unfamiliar view for most witnesses. As relative to the head of a condor, the eyes and nostrils DO come at the proper intervals along the elongated head, while the "mouth" is clearly the transverse ridge where the beak attaches on: