Not Fortean Zoology or even Zoology as such, but one news item I have been awaiting a LONG time... 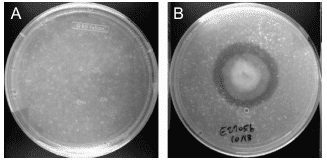 A group of students from Yale University, along with molecular biochemistry professor Scott Strobel, were on a routine trip to the Amazon’s Yasuni National Park, one of the most biodiverse regions in the world, when they stumbled across a peculiar type of mushroom capable of eating polyurethane plastics. If successfully applied to landfills clogged with millions of metric tons of garbage plastics, this could have a potentially critical role in cleansing the environment.
Polyurethane is a synthetic polymer which is makes up most of today’s plastics. Although, plastic is recyclable in certain degree, most of the world’s plastic wastes are simply dumped in giant landfills where it simply remains there indefinitely, since it’s not biodegradable.
Pestalotiopsis microspora was showed to to have the most ability to survive while consuming and degrading polyurethane in aerobic and anaerobic (oxygen-free) environments, like those found in waste landfills. Initially the scientists collected 59 fungi endophytic organism, and after a lab analysis they selected Pestalotiopsis microspora as the most effective fungus , by observing the rate of plastic degradation.


“Polyurethane seemed like it couldn’t interact with the earth’s normal processes of breaking down and recycling material. That’s just because it hadn’t met the right mushroom yet,” the authors write in the paper.

Yes! This remarkable fungus can survive dieting exclusively on Polyurethane, without any kind of oxygen. It’s been proven to work extremely well under lab conditions, however, it’s yet to been tested on massive landfills, but there doesn’t seem to be any indication that it should work. The same paper notes more and more plastic is being produced every year and cites 2006′s production at 245 million tons. How much of these plastics will end up in the Earth’s soil? Super-fungus to the rescue!
Let’s not forget about the Chernobyl fungus that feeds on radiation either. I for one welcome our new mushroom overlords.
The research was published in the journal Applied Environmental Microbiology.
Fungus that devours plastic might help clean the environment is a post from ZME Science. © ZME Science - All Rights Reserved.
Thank you for being a subscriber, Download your very own FREE copy of our recently released e-book "Our Incredible World, Like You've Never Seen It Before".

Now what we need is to bioengineer the marine version and we just might be able to save the poor old world for future generations. Plastic pollution is the single most pernacious and intractible solid waste pollution problem we have been facing. Human waste is at least biodegradable.
Best Wishes, Dale D.
Posted by Anonymous at 13:23