Message sent to me from Andrea Machler:
Hey Dale,
I just stubeled upon a conversation in one of the grpoups I'm in. They brought up the topic of Trolls in Skandinavia after someone found the article about the troll footprint on Bigfoot Evidence. I thought you might be interested in a snippet of this conversation.

Here's what one of the members wrote:
"I went to school with a known Dj in Sweden , we hung out a lot and his mom showed me a photo her grandfather took over the local lake during the winter , it was a genuine photo that was kept in her family album along with portrait photos etc and you could clearly see one walking over the frozen ice on the lake , taken on a clear day but in black n white. No photoshop back then . Sounds like crazy shit but it did have an effect on me as to keep an open mind . I dont take everything seriously but I do accept that anything is possible. Life itself is a wonderful miracle and there are plenty of weird little things out there we can't even grasp ."

He was the asked: "That's awesome Erik! Did it look like the "standard" North-american bigfoot? Or more like "The Abominable Snowman" you think? Would be interesting to know."

And answered: "You would be surprised to hear it looked like the dude in your post up there , that cartoonist is pretty damn close . I know the lake well like the back of my hand and all the forest surrounding it for miles , to judge the size I would give a rough estimate of two meters tall but tricky enough as it was hunched over when walking , the only thing that makes me think they are not big foots is the other two mates that swore their troll was a large rock/boulder that turned into a troll and stood up and walked off away from where they were . The guys mentioned in both stories are people a trust my life with ."

This is the cartoon he's talking about http://upload.wikimedia.org/wikipedia/commons/0/02/Theodor_Kittelsen_-_Sj%C3%B8trollet%2C_1887_%28The_Sea_Troll%29.jpg 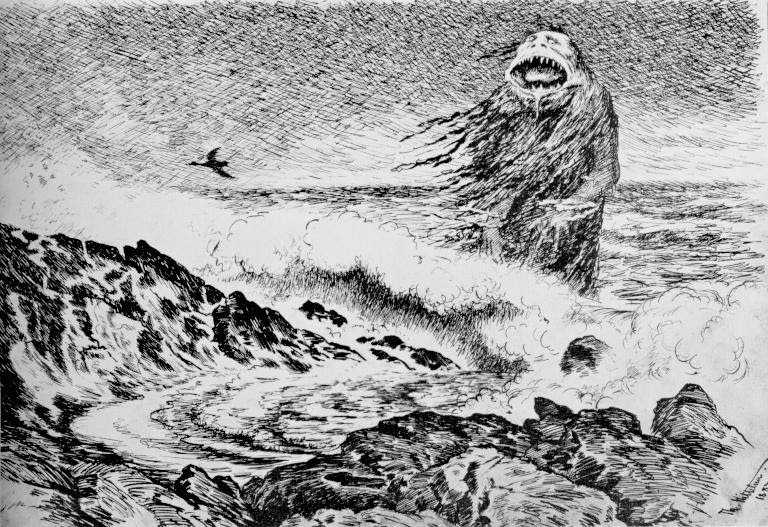 As to the creature looking like a rock or a tree stump before it moved, that occurs in North American Bigfoot stories. Apparantly the creatures can sit very still indeed in hops of escaping notice and with their backs turned sitting down, they do not immediately look like living humanoid creatures.

Another Troll image is provided on the cover of the book:

and this is pretty much a representation of a "Wild Man" costume as worn in festivals throughout Europe, the whole body garbed in a coverall sort of garment that represents a close over-all coat of hair.Trolls are also traditionally barefoot but not necessarily so.

There are Scandinavian travel sites which helpfully provide traditional images of Troll tracks, basically of the same outline expected for large Neanderthal tracks. The ones at top are scaled for a 7 1/2 foot tall Troll and a more normal human sized "Wood Nymph" with basically the ordinary type of human foot.
http://varmlandofscandinavia.com/about-contact/
Troll tracks are also traditionally printed around town in chalk during festivals and one of the representations in chalk is shown below the ordinary track outlines (This has only three toes but preserves the very broad and square outline of the tracks)
http://www.decorahnews.com/opinion/stories/97.html
I have seen enough of these that I think it can be said these are not unusual or atypical representations-the idea is that Troll Tracks really are supposed to look that big and squared off  (One site used a typical Bigfoot footprint cast from Texas to illustrate the Troll Tracks)
http://kryptoeng.blogspot.com/2010/07/yeti-bigfoot-and-swedish-trolls.html
The same sort of tracks are also associated with the usual European "Wildman" representations and so there is likely continuity through that tradition also.Ultimately the traditonal tracks seem to come by way of tracks represented by being pecked into stone surfaces as ancient rock art. (Compare Troll footprint design charm bead as pictured below in a copied form according to the originating site)

Some pertinent Wildman images for Reference:

Left, Traditional Wildman,often associated with Scandinavian countries including on churches. My photosearch turned up a similar modern statue situated in Lappland (Northern Sweden part) At right, representation of Wildman probably based on performance costume, showing onepiece coverall pattern leaving hands and feet uncovered. Some depictions of Trolls seem to show this sort of conventionalisation and it is understood generally throughout Europe as implying the actual thing through its theatrical re-enactment. Below are a couple of illustrations for Skogsras, the term itself means both the male and the female but more usually it is taken to mean the shortened form for the female-only (Skogsfru) and they are to be understood as something like the Classical Satyrs. They could be wearing animal furs with the tails still attached as many people were known to do historically in other places (Including the Egyptians) Frequently they are also shown with twigs, sticks and leaves entangled in their hair and especially the long hair that hangs down their back.