From Bigfoot Evidence. If it's a Free Documentary, It's worth re-posting. 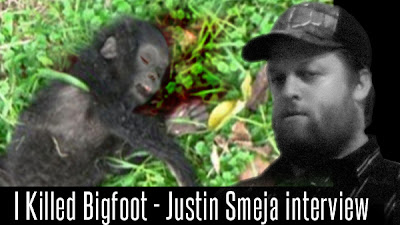 Last June, it was reported that a bear hunter in Northern California shot and killed two Bigfoots. One Bigfoot he shot was an adult and the other one was a juvenile that died in the his arms after being shot. According to the story, the hunter said the Bigfoots appeared sometimes on two legs and sometimes on four legs. They got aggressive with him and moved very close to him. At one point, one got on a ledge above him and seemed to be threatening him. He shot it out of fear it was going to attack him.
For a period of time no one knew if the story was true, but then Derek Randles of the Olympic Project released an official statement correcting some of the "misinformation" circulating the Bigfoot community. That official statement from Randles set the stage for what is now called the "Sierra Kills".

Justin Smeja, a hunter from Sacramento, CA was out bear hunting near Gold Lake with his friend (the driver) back in October 2010. This is his story:

3. Tim MitchellMonday, July 16, 2012 12:54:00 AM PDT
the bigfoot steak actualy looks kinda like the hair of hovey's pic. i want to hear his friends side and want to have ro's live to be able to drink and interview is my dream lol
4.

TKWMonday, July 16, 2012 1:00:00 AM PDT
Thanks for the interview and asking great questions. I am on the fence with whether he is telling the truth or him lying to make money. Polygraph and DNA results will tip the scales. My only question is what of the other guy who was with Justin? Where is he? And what is his side of the story?
--As to the last question the other fella has been interviewed and has made a statement. It has been printed on this blog in an earlier entry. And as to the DNA results, I have been in not exactly close but friendly communication with Melba Ketcham and her secretary Sally Ramey almost the whole time this incident has been in the news and  both the samples and the DNA results arising from it are all too real.
Best Wishes, Dale D.

String of Messages from the Facebook Group Ohio Bigfoot Hunters:
Tim Stover TcsjrBigfoot
Has it occurred to anybody that Justin Smeja is a cold blooded killer? I've been a hunter all my life and I know what kind a person it would take to kill something that's not on the menu. Just my thought.
Tim Mitchell, Pat Camp, Larry Wentz and 7 others like this..

Dale Drinnon Believe me, we've been discussing that aspect of the case for months now. The last time I posted on the matter, I got postings on my timeline saying so
6 hours ago · Like.

Tim Stover TcsjrBigfoot Ya it's sad. If true than I can't imagine what was going thru that Bigfoots mind when the gun was aimed at it. 6 hours ago via mobile · Like · 1.

Billy Elder i am listening to joe rogan talk with BoBo about this and it sucks 6 hours ago · Like · 1.

Kevin Foley Not sure whether or not this joker killed anything worth talking about?...Does any one realy have any proof of this incedent? Tim, you are a known BF researcher..."do you believe this incedentr really happened"? I think he killed a local animal....not anytrhing else....Give me proof! 6 hours ago · Like · 2.

Tim Stover TcsjrBigfoot Kevin I will never believe until I see the body. DNA will not satisfy me either. I know they exist and if this clown is telling the truth than I consider it murder. 6 hours ago via mobile · Like · 3.

Kevin Foley BTW, we have listened to this "made up" story for over a year now...and not ONE solid piece of evidence has been issued regarding the so called (2) kill BF in Northern california. Can we move on and declare the so called Smeja "murder" declared as a false incident"! In other words BULLSHIT story! 6 hours ago · Like · 1.

Dan Baker Tim, for the record,if he did indeed kill two Sasquatches and they are hominids, then in my opinion it was nothing less than 1st degree murder. We Do however, need the proof which eludes all of us at this time. 5 hours ago · Like · 1.

Tim Stover TcsjrBigfoot I agree Dan 5 hours ago via mobile · Like · 1.

Dan Baker I will never be pro-kill when it comrs to bigfoot. 5 hours ago · Like · 1.

Dale Drinnon Another thing to add to that-preliminary DNA tests on the samples provided say they ARE human. So going by that much, no doubt, he is 100% guilt of first-defgree murder. AND he is guilty of first degree murder NO MATTER WHAT HIS STORY IS, when he provides that as a sample of whatever it was he had killed. I point out frequenntly he could "Only" have killed an ordinary woman with excessively aboundant pubic hair and just cut a swatch out of her hairiest part. DEFINITELY murder in that case, and pretty sick one at that. 5 hours ago · Like · 4.

Fox Flinginpoopen that has been my opinion all along tim 5 hours ago · Like · 1.

Steve Alcorn SasquatchScoop ‎Tim Stover TcsjrBigfoot, I don't think he killed any Bigfoot. if you watched Ro's interview it appears very clear to me. You were a hunter so you know that you never shoot what you can't identify. in one part of the interview he claims that he shot the juvenile and then his buddy came down the hill . So he wants us to believe he shot the kid when he didn't know his buddy's location. NO hunter I know of would ever pull the trigger without being certain of their friends location. Smeja was a very experianced hunter, I heard that he was even a bear hunting guide. His story just don't stand up in my opinion. 5 hours ago · Like · 3.

Fox Flinginpoopen he just sounded smarmy and smartass to me 5 hours ago · Like · 2.

Keith Miller ‎Steve Alcorn SasquatchScoop: I know what you mean I have passed up shots on deer because I wasn't sure if it had horns or not. A true hunter wont shoot anything he can't identify. 4 hours ago · Like · 1.

Fox Flinginpoopen he sounds like a jerk that would shoot anything that moves, has no respect for life at all. if i shot a bigfoot, even if it was tryna kill my little ass, i would still feel guilty for the rest of my life 4 hours ago · Like · 2.

Mike Fonte I dont think i believe the guy at all 4 hours ago via mobile · Like.

Steve Alcorn SasquatchScoop ‎Keith Miller, exactly! I don't hunt but know many hunters, all of them have told me that the wont shoot unless they are certain. They even count the points on the deer to make sure it's legal. There are some bad hunters out there but even they wont shoot unless they know what they are shooting. If your buddy is screaming don't shoot because it might be a guy in a suit you sure as hell aint gonna shoot, if you do you deserve a special place in hell. Tim Stover TcsjrBigfoot, can tell you better than any one what goes through your mind when in a circumstance like this, he didn't shoot. Many hunters say they couldn't shoot even if they wanted too because it looked too human. Smeja is either a liar or one of the most dispicable human beings around. My opinion. 4 hours ago · Like · 1.

Tim Mitchell i want to talk to his friend who was with him and killed people in combat and knows what is a threat and what isnt. 2 hours ago · Like.

Fox Flinginpoopen well from wut he said his friend was saying, it didnt look like a threat to him. he was saying dont shoot 2 hours ago · Like.

Tim Mitchell exactly that is why i would want to talk to him. he knew it wasnt a threat and had no need to be shot 2 hours ago · Like.

Steve Alcorn SasquatchScoop ‎Tim Mitchell, The adult was alegedly shot from the truck so no real threat there, as far as the juvenile he didn't really say why he felt threatened. I am currently reading the entire thread on the taxidermy forum that Smeja originaly posted to, it is 57 pages and I am on page 23. 32 minutes ago · Like.

Tim Mitchell well let me know when you are done with it. i dont know if you caught joe rogans podcast with bobo last night but they talked about it in the beginning 30 minutes ago · Like.

Steve Alcorn SasquatchScoop Yep, I listened to it today. Bobo dissapoints me with his support of Smeja and Ketchum, other than that it was good. 24 minutes ago · Like.

Tim Mitchell i was kinda surprised that he was out with meldrum looking for the bodies. still i want to find his friend and talk to him. he is the missing link to the story since they have no body 21 minutes ago · Like.

Steve Alcorn SasquatchScoop Funny, Smeja never posted in that original thread that he killed a Bigfoot, he described it as a funny looking bear, then no mention of a juvenile until another person brought it up a couple weeks later. Apparently he spoke to another guy on the phone and told him the story, a couple weeks later the guy posted what Smeja told him. Smeja posted that he wished the guy would not have done that. 19 minutes ago · Like.

Tim Mitchell hmm for all we know maybe they just paid his dumbass to take the rap for what someone else might have did and that's why he couldnt find the bodies. one more question how the hell did he find the steak and no bone attached to it? 17 minutes ago · Like.

Tim Mitchell i was told i could talk to justin myself and i might just take that person up on it just to hear it for myself and ask the questions i want to ask. not that ro did a bad job. it just left me with a lot of other questions 15 minutes ago · Like.

XXXXXXXXXXXX I am just going to attempt to message him and see what I get. here is the link to the taxidermy forum, you have to register to read it. Night folks. http://www.taxidermy.net/​forum/index.php/​topic,238666.0.html
www.taxidermy.net Taxidermy Net Forum interactive bulletin board for the taxidermy industry, with over 10,000 unique visitors each day..
11 minutes ago · Like.

I cut the string at the point where more sensitive information was being posted.

Further update on story:
http://bigfootevidence.blogspot.co.uk/2012/07/first-major-news-article-on-sierra-kills.html?spref=fb
Posted by Anonymous at 05:17