ChupaBats in Texas, and More on Big Bats

While doing a photosearch re colour photo indicated above turned up as an unue creature from Texas. It was an anonymous piece of artwork used to  illustrate Kark Shuker's blog about an unusual "batman-big bird creature" seen in 1976:


"Sitting in his mother-in-law's backyard at Raymondville, Texas, on the evening of 14January 1976, Armando Grimaldo suddenly heard a strange whistling, and a sound that reminded him of flapping bats' wings - a highly pertinent comparison, as it turned out. For just a few seconds later, he was attacked by a man-sized monstrosity with the face of a bat or monkey, a pair of large flaming eyes but no beak, dark, leathery, unfeathered skin, and a pair of huge wings yielding a massive 10-12 ft wingspan (i.e. twice that of any known species of bat). Swooping down at the terrified man, the creature snatched at him with its big claws, but, happily, Grimaldo was able to flee inside before his aerial attacker had inflicted any serious injuries. Nevertheless, his encounter was just one of several on file from this particular region of Texas during early 1976, all documenting sightings of a similar entity

As soon as I saw the illustration I saw theresemblance to my reconstruction for the Chupabat, a giant False Vampire bat reported the size of a medium-sized dog when running on all fours on the ground, and with a wingspan as large as the largest known bats or even a moderate-sized eagle; six or seven, maybe even as much as eight feet ( ten or twelve feet would be closer to half again than to double the size) which is said to predate upon livestock occasionally in Mexico and Central America, so finding one in Texas or New Mexico would not be too unusual. The real resemblance in the illustration is with the shape of the head. The black and white illustration shown above is clip art of the known (Smaller) False Vampire bat. A scaled-up version could easily have fanged canies more than an inch long.


"Chupacabras-like depradations occur in the Southwest USA on occasion and could be linked to such Chupabats or Gargoyle Bats. Sheep mutilations, victims severely wounded and gutted without leaving much evidence of spilled blood on the ground, are reported from the 4 Corners region of New Mexico and thought to have been done by a large ChupaBat such as implicated in similar cases in Mexico: JC Johnson 1 year ago
Typical protocol in this situation,- the tribe insists that all of the animals be put down in case of rabies. No other recourse I'm﻿ afraid. The injured sheep were being shot as we were leaving the scene.

Heyoka Ha 2 months ago Very peculiar indeed. The hoof (foot) prints were in pairs, that is what you mean by bipedal? In any of the sheep injured, Was there any indication that the blood could have been taken first and then the animal attacked again? I am thinking there was more than one﻿ of these creatures.

OziBushMysteries 4 months ago thats not 'horse shoe prints ' i'd have﻿ to tell u? [Jersey Devil prints? the footprints were irregular ovals and I could not tell what they were. I would guess they were blurred sheep tracks]

Special thanks to JC Johnson for pointing out the videos.

Mixed in with the other reports of Giant bats are reports of an even larger but flatfaced bat, also seen in Texas in 1976. They seem to be a northen extension of the American equivallent of the Ahool, in Mythology known as Camazotz.

Monkeyfaced "Big Bird" of Texas 1976. Obviously the artist is confused about the arms and the legs and the wings. They have drawn a birdlike instead of a batlike body plan A policeman seeing one of these creatures hiding in the branches described the face as looking like that of a gorilla


The Ahool is the latest addition to the InCryptid Field Guide! 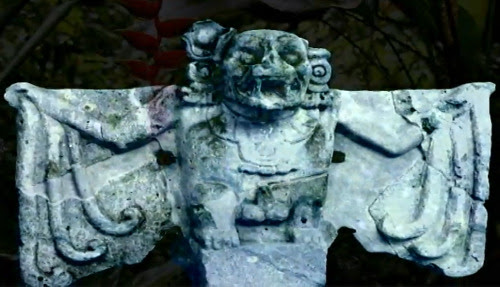 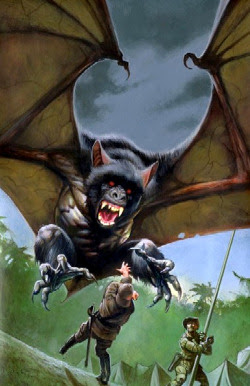