Is this the real Loch Ness Monster? Boat skipper claims to have snapped 'best ever' picture which 'proves fabled beast exists'


As George Edwards peered into the thick mist that covered Loch Ness with an eery silence, he glimpsed a dark hump slinking in and out of the still waters.
Was this the bashful beast he had hunted every day for 26 years and has outfoxed scores of investigators before him?
He steered his boat, Nessie Hunter, towards the mysterious form - without a thought for his own safety - to take a photograph before it vanished back into the deep.
He now claims the picture is the best ever taken of the Loch Ness Monster and - most importantly - proves once and for all that the elusive leviathan is definitely NOT a sturgeon. 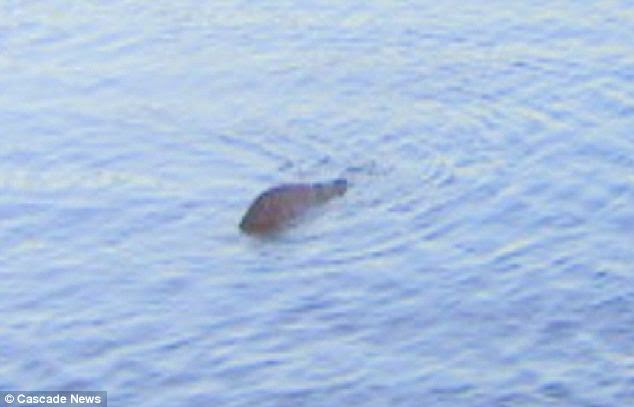 Is that you Nessie? George Edwards claims this is the bashful beast he has hunted every day for the last 26 years? 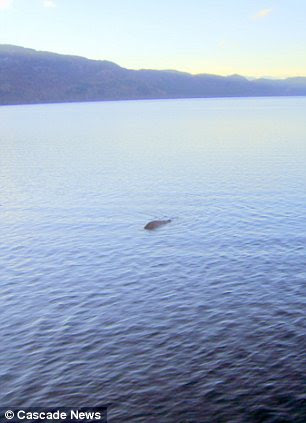 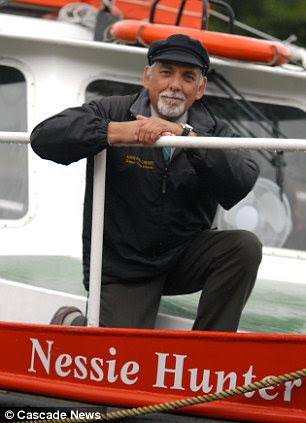 
George spends his life on the loch - around 60 hours a week - taking tourists out on his boat Nessie Hunter IV, and has led numerous Nessie hunts over the years.
'I was just about to return to Temple Pier (in Drumnadrochit) and I went to the back of the boat which was facing the pier and that’s when I saw it,' said 60-year-old Mr Edwards, a lifelong believer in the monster.

IF NOT A MONSTER, THEN WHAT?

The Loch Ness Monster has been the subject of many sightings in the Scottish Highlands.
Some experts believe that the beast represents a line of long-surviving plesiosaurs, a type of carnivorous aquatic reptile from millions of years ago.
Nessie is similar to other supposed lake monsters in Scotland and elsewhere, though its description varies from one account to the next.
There have been hundreds of supposed sightings over the years. Most, however, have been dismissed as hoax or fantasy.
One of the most accepted explanations is that the monster is in fact a giant sturgeon (pictured), which can grow up to 12 feet long.
Others include eels, bird wakes, seals, trees, logs, submarines, dogs with sticks - even an elephant.
'It was slowly moving up the loch towards Urquhart Castle and it was a dark grey colour. It was quite a fair way from the boat, probably about half a mile away but it’s difficult to tell in water.'
After watching the object for five to ten minutes, Mr Edwards said it slowly sank below the surface and never resurfaced.
'I’m convinced I was seeing Nessie as I believe in these creatures. Far too many people have being seeing them for far too long,' he said.
'The first recorded sighting was in 565AD and there have been thousands of eye witness reports since then.
'All these people can’t be telling lies. And the fact the reports stretch over so many years mean there can’t just be one of them. I’m convinced there are several monsters.'
Steve Feltham, who has dedicated the past 21 years to hunting for Nessie was unequivocval. 'It is the best photograph I think I have ever seen,' he said.
From his base on Dores beach and has studied many Nessie sighting photographs.
'I think the images are fantastic - that’s the animal I have been looking for all this time,' he said yesterday.
'I would say it doesn’t prove what Nessie is, but it does prove what Nessie isn’t, a sturgeon which is a fish that has been put forward as one of the main explanations as to what Nessie could be but this hasn’t got a serrated spine like the sturgeon.
Mr Edwards attempted to use his vessel’s sonar to make a contact but to no avail. 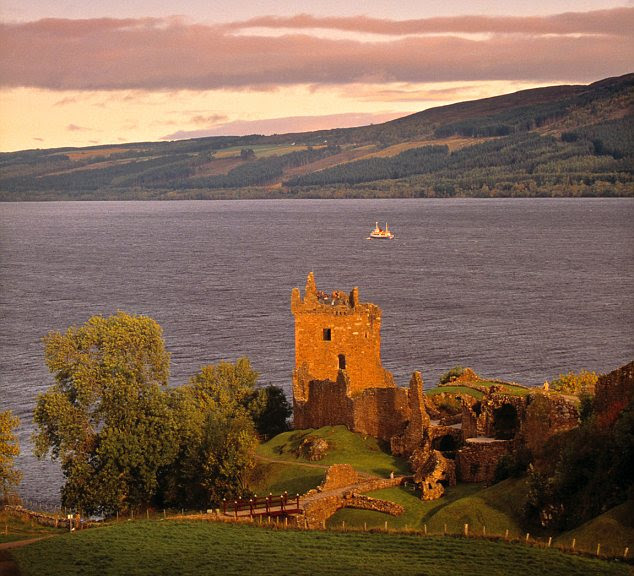 Bashful beast: George said the monster was slowly moving up the loch towards Urquhart Castle (pictured) 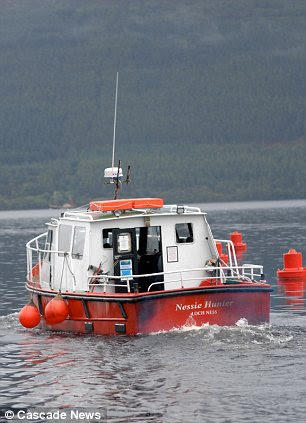 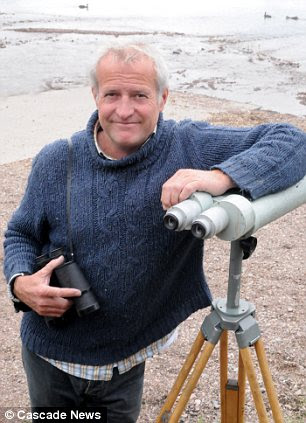 Steve Feltham (left), who has dedicated the past 21 years to hunting for Nessie said the picture is the 'best I think I have ever seen'. Left, George Edwards' boat, Nessie Hunter
'I hung around for a good half-an-hour and used the deep scanning sonar to try and pick it up, but I’m afraid I had no luck at all.'
Mr Edwards took the photo at 9am on 2nd November last year on a compact Samsung digital camera that he always keeps on the boat.
Before releasing it publicly he sent it to the USA for analysis, though he can’t reveal further details.
'I did not want to mention my sighting until I was sure that I had not photographed a log or something inanimate in the water,' he said. 'I have friends in the USA who have friends in the military.
'They had my photo analysed and they have no doubt that I photographed an animate object in the water. I was really excited as I am sure that some strange creatures are lurking in the depths of Loch Ness.' 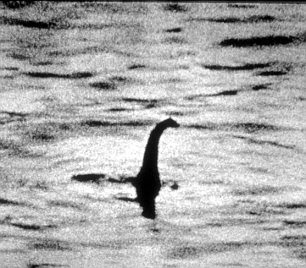 The Loch Ness Monster has been a subject of mass intrigue and debate since it came to the world's attention in 1933.
Scientists have widely written off the idea as a modern-day myth and continued sightings as set ups and wishful thinking.
Yet it has remained a contested phenomenon for almost 80 years.
Perhaps the most famous picture of Nessie was taken by Robert Kenneth Wilson, a London gynaecologist (pictured left). It was published in the Daily Mail on 21 April 1934.
The picture showed what looked like a long neck and head rising from the water.
However, it turned out to be a toy submarine bought from Woolworths with a head and neck made of wood in an elabourate hoax by big-game hunter Marmaduke Wetherell in an act of revenge on the newspaper that had ridiculed him over his hapless search for the beast.
The earliest report of a monster in the vicinity of Loch Ness appears in the Life of St Columba by Adomnán, written in the 7th century.
St Columba, an Irish monk, had sent a disciple into the loch to prove there was nothing there. But the monster rose and chased the man snapping at his heels.
But it fled in terror 'as if pulled back by ropes' when St Columba made the sign of the cross and commanded: 'Go no further. Do not touch the man. Go back at once.' 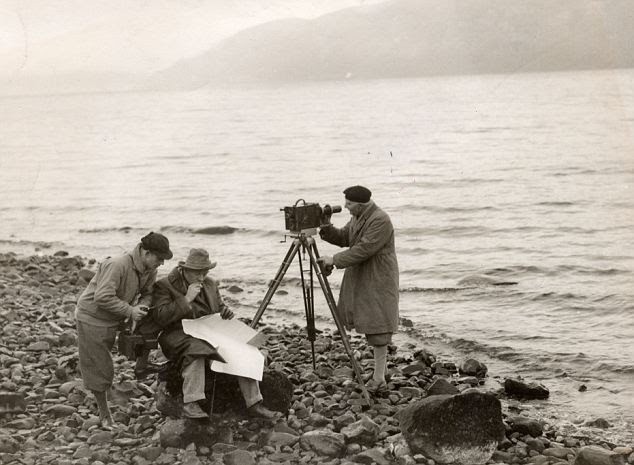 The great faker: Marmaduke Wetherell (seated) is pictured studying a chart of the Loch Ness in their search for the Loch Ness Monster. He was said to have faked the most famous picture in revenge for bad publicity
In November 1933, Hugh Gray was the first to picture something splashing in the water.
Four stumpy-looking objects on the bottom of the creature's body appeared to look like appendages, such as flippers. It was later suggested the creature was a dog, possibly holding a stick.
In 1938, G. E. Taylor, a South African tourist, filmed something in the loch for three minutes on 16 mm colour film.
His picture was declared 'positive evidence' by a famous biologist and cryptozoologist.
In 1960, aeronautical engineer Tim Dinsdale filmed a hump crossing the water leaving a powerful wake.

Dinsdale allegedly spotted the animal on his last day hunting for it, and described the object as reddish with a blotch on its side.
In May 2007, Gordon Holmes, a 55-year-old lab technician, captured video of what he said was 'this jet black thing, about 45 feet long, moving fairly fast in the water'.
The film, though, has been cast into doubt. Holmes has been criticised for claiming the existence of fairies. Another expert later claimed the film actually shows otters swimming in the loch. 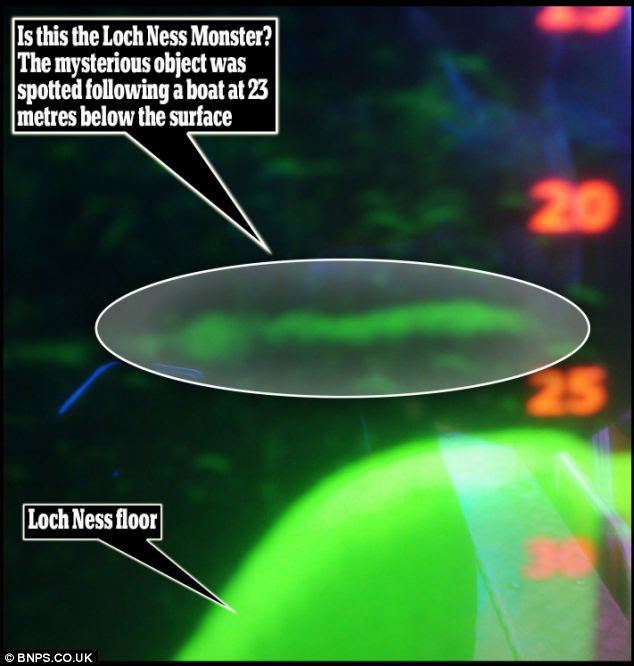 Questions: This is the sonar image that revived belief that there's something unexplained out there, taken by skipper Marcus Atkinson in February
In February 2012, a sonar image of a large mystery object deep below the surface of Loch Ness netted boat skipper Marcus Atkinson the Best Nessie Sighting of The Year Award - the first time in several years it has been presented by bookmaker William Hill.
The sonar picture, that shows a large unidentified living object deep underwater, was recorded by Loch Ness boat skipper Marcus Atkinson.
Mr Atkinson’s sonar fish-finder device records the width of objects in the depths directly below his tourist boat every quarter of a second.

[Frankly the thing on the surface still looks like a fish to me: a fish should not float so high out of the water, though-DD]
Posted by Anonymous at 05:09