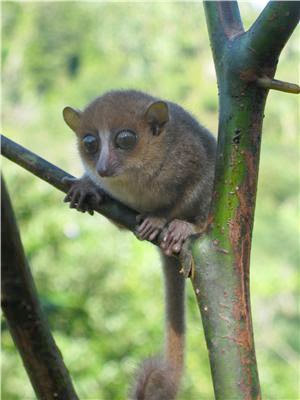 Microcebus gerpi. Photo by Blanchard Randrianambinina
Photo: Tiny lemur discovered in Madagascar forest
wildmadagascar.org
January 08, 2012
A new species of mouse lemur has been discovered in eastern Madagascar, report researchers from Germany. The species is described in a recent issue of the journal Primates.
The diminutive primate is named Gerp's mouse lemur (Microcebus gerpi) after a GERP (Groupe d'Étude et de Recherche sur les Primates de Madagascar), a local lemur research group. It was discovered during surveys in 2008 and 2009 in Sahafina Forest, a fragment of rainforest just 50 km away from the well-known Mantadia National Park, which lies east of Madagascar's capital city of Antananarivo. The lemur was confirmed as a "new species" after genetic analysis of small biopsies collected during the surveys. Lemurs were not killed to make the determination that it was an undescribed species.
At 68 grams (2.4 ounces), Gerp's mouse lemur is "a giant" relative to Goodman's mouse lemur, a species found in nearby Mantadia, according to a press release from Stiftung Tierärztliche Hochschule Hannover, the German institution that supported the research.
The conservation status of the new species is presently unknown, but due to fragmentation of habitat in the region, it is likely at risk from further deforestation.
More than 40 species of lemur have been described in the past decade. There are more than 100 lemur species Madagascar, the only place lemurs occur naturally in the wild.
Mouse lemurs are the smallest lemurs and among the tiniest primates in the world. They are found in virtually all of Madagascar's forests where they feed on insects, fruit, and plant sap. Mouse lemurs are nocturnal and betray their presence with high-pitched chirps.