I have been looking for some specific photos of one of these creatures appearing as 'a ridge of spines in the water' seen swimming in a reservoir in the US Southwest (probably in Arizona) but the photo and any reference to it continues to elude me. This was the subject of an early message posted at the Yahoo group Frontiers of Zoology and the photo was definitely posted in a news bulletin THEN (in 2006-2007 approx.) but he group's search engine is not being very helpful lately. There is enough information about these creatures to know that they are pretty much exactly very large iguana lizards that are capable of travelling overland and of sleeping in dug-out burrows when their small lakes dry up; and they appear to be referenced in Native depictions of all other Water-monsters that have a row of spines down the middle of the back. In fact we might have more information about these creatures from misplaced references in other areas to the North and East than we do in this area itself: and they seem to be the same as the Faux-Alligator "Dinosaurs" (Whangdoodle, and such) that have been discussed in other articles on this blog.

It is not known if these are actually the full growth stage of the "River Liz" or a different, larger species. The most parsimonious arrangement would be that both are the same species (and the same as the Cryptid the Greater Dragon Iguana of Latin America)

This is also by way of another displaced reference in that another internet site is selling certain photos of "Water Monsters" which are obviously showing the backs of large iguana lizards swimming in the water but with the spines sticking up. These are not the same as the photo in the one news story that I cannot locate now, but they are comparable. Here are the photos in question, in black and white and in colour (if anything the spines in the photo I am looking for are even larger and more exaggerated)

In fact these photos are of sea iguanas at the Galapagos Islands, swimming in salt water. Such spinybacked water monsters are also reported in South America, at lower elevations in the Andean nations. They seem to be the same as Bernard Heuvelmans' "Iguanodons" mentioned on his checklist, actually giant iguanas instead and otherwise known as "Saurians." The Latin American name for the spinybacked creature in Folklore is "Serra."

One example that has been discussed on this blog is the Lake Mead Monster: 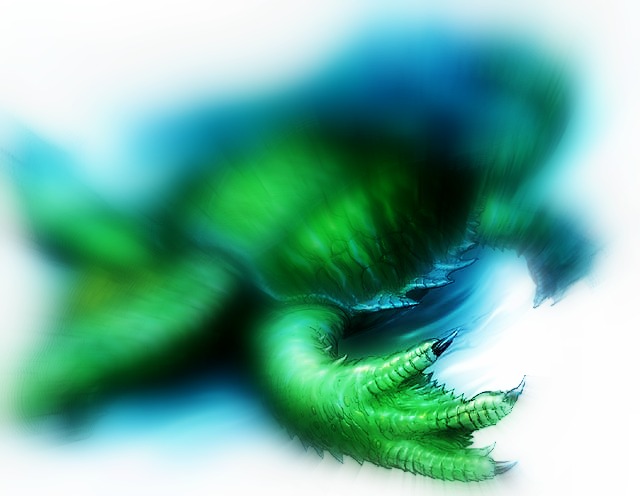 Lake Mead is the largest reservoir in the United States in maximum water capacity. It is located 24 miles from the Las Vegas Strip southeast of Las Vegas, Nevada, in the states of Nevada, and Arizona. The massive lake is reserved by the Hoover Dam. Lake Mead is 112 miles long, and around 500 feet at greatest depth. It holds roughly 28 million acre-feet of water. 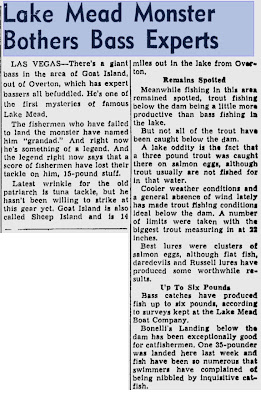 The lake bed is mostly sand, and rocks with the odd bit of seaweed here and there. The lake is home to a variety of fresh water fish, as well as a very strange creature some have claimed to see. This creature is known as the "lake Mead Monster".

According to legends of this cryptozoological creature, In 1948 a B-29 crashed into the lake on July 21. Jet fuel leaked into the lake and polluted the waters. Although the pollution wasn't bad enough to destroy all the life in the water, crypto hunters say it was enough to cause mutations, along with other human waste pollutants.

Shortly after the crash a man was arrested for dropping off alligators in the fresh water. Why this man did this  is unknown. Some speculate he owned these alligators as pets, and as they grew too big he was unable to keep them. The legend goes that these same alligators that are believed to live in the waters today have undergone strange mutations. With plenty of fish to eat, these creatures have grown into massive size.

Fisherman have also reported seeing this strange creature, although they attribute the features to be a super Bass. In a news paper article published in the 50's, fisherman claims gave it the nickname "Grandad".

Today people still claim to see these strange creatures in the lake, and the search continues. Perhaps we will find out the truth about this creature soon. After all Lake Mead is estimated to dry up by 2020 according to new studies.
- See more at: http://www.parahauntpost.com/2013_02_01_archive.html#sthash.qcdEhpHP.dpuf

A large reproduction of a Spinyback lake monster is on display at Manly Lake in Death Valley
(it seems that some of these creatures can tolerate saltwater to some degree. They do not eat fish in these lakes, they eat plants on the shore. Probably they do not even drink the water)

Presumably this would be based on the sighting of a bigger one followed by a smaller one, both seen as spiky-backed humps on the surface. (Although such creatures are said to grow up to 20 feet long in some locations, this is probably exaggerated)