Lake Memphremagog: The Legend Of Memphre 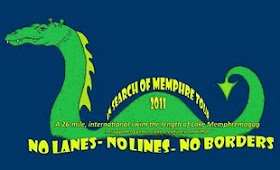 Lake Memphremagog: The Legend Of Memphre, A Monster Which Sits In The Quebec/Vermont Lake (PHOTOS)


The border separating Quebec from Vermont runs through dairy fields, traverses a small wood and crosses an abbreviated beach before diving a little over 300 feet under the cold waters of Lake Memphremagog, a 39-square-mile amoeba of glacial water that either does or doesn't contain a 30-foot-long monster. If the lake doesn't contain a monster, its most notable feature is probably its hilly shore, which bursts into riotous color come fall and presents an inviting destination for American leaf peepers exploring the Northeast Kingdom and Montreal homme d'affaires on weekend getaways.
The lake is bookended by two charming towns, Newport, Vermont and Magog, Canada, which display very different sensibilities. Newport has the look of a mill town with a brick main drag and neighborhoods full of small homes for the tradesmen who hang out downtown in greasy spoon diners. The best view in town is from the church and everybody nods or waves to everybody else. Magog is a larger place and many of the Victorian homes just outside the lengthy town center, which contains multiple practical footwear stores and a sex shop, are bed and breakfasts. There is a town park by the water where neighbors walk together and fail to smile at strangers and where a sign reminds visitors to look for Memphre, which is the name of the monster. (*SEE PHOTOS BELOW*)

Memphre got his name from Jacques Boisvert, who called himself a "dracontologist" and lived in a clapboard house three minutes out of Magog. Boisvert, who died in 2006, was the Canadian ambassador to Memphre. Along with Barbara Malloy, the head of the Memphremagog Historical Society of Newport, he publicized the serpent and, in so doing, the region.
The region on both sides of the border -- crossing requires little more than a few minutes of small talk with a custom's officer -- is quiet and pretty. The delights of this landscape, the maple trees and postcard-ready barns, are no more ostentatious than the people who inhabit it. Syrup is sold out of mud rooms and, aggressive Quebecois driving aside, courtesy seems to be the great cultural achievement. In Magog, neighbors spend a lot of time raking each other's lawns.
In this context, Boisvert's monstrous story has a distinct appeal. It helps, of course, that the story also has compelling details: A viking petroglyph found at the top of a mountain near the lake showed a serpent and, when Europeans first arrived in the area, they'd been warned off swimming in the lake by natives with similar concerns. Of course Boisvert had also seen the beast. As had Mrs. Malloy.
"At first, when you see it is pitch dark," Malloy told Huffington Post Travel by phone. "When I first saw it, it was coming in from the Canadian border. I thought it was jetskiers because it was moving fast, but when it turned to go south more it was parallel to the road and I could see from the side view that it had a head like a horse, a long neck and a big body. As it got closer I could see that it was pretty tall and as long as a house. Then it turned again and went towards the west shore and, as it swam out it disappeared into the mist because it had been raining."
It is probably worth saying the Malloy doesn't come across as crazy or attention-seeking. To the contrary actually. She says she's trying to talk about the creature less these days because "the whole thing has brought a lot of frustration." Still, she is an evangelist for the creature's existence and the holder of the copyright to his name.
She believes that a serpent lives at the bottom of the lake, that he's smart and that strange things happen along the 45th parallel -- this is a common refrain among bigfoot and UFO hunters. She's collected eyewitness reports of monster sighting from nearby lakes as well, so she isn't a Memphremagog exceptionalist. She thinks there might be ancient swimming reptiles in Lake Seymour, Lake Willoughby, and Crystal Lake. And those are only the American monsters.
"These all sound a lot like Champ," Malloy says, namechecking Lake Champlain's famous beast, the mascot for -- among other things -- the Short Season Single-A Vermont Lake Monsters.
If it did live at the bottom of the lake, a beast like Memphre would probably be classified as a Sauropterygian. Sauropterygians -- think Plesiosaurs or the Loch Ness Monster -- are aquatic reptiles and though they were once extremely common, they went extinct along with the dinosaurs at the end of Cretaceous period.
This means that Lake Memphremagog -- if Malloy is correct -- should be of tremendous interest to scientists instead of being, as it is now, of some interest to open-water swimming enthusiasts and Canadian mountain bikers, who favor the trail system on nearby Mount Orford. The people who rent the paddle boats from the public docks would probably be a bit more nervous as well, though they'd still rent the boats because the lake is beautiful. It just happens to be beautiful in a very specific way: It's eerie.
Early in the morning, vapor rises off the lake and visibility can be fairly low. The hills and mountains beyond the Lake are perfectly reflected on the flat surface of the bracing water. The shallows are clear and filled with clouds of small fish and piles of pebbles. From the lookout dedicated to Jacques Boisvert in Magog, visitors can see many miles, but may find themselves without much to focus on other than the few small islands that interrupt the liquid metal of the water.
Boisvert, it turns out, was something approaching beloved in the town of Magog, a fact Malloy credits to the politeness of Canadians, who seem more willing to engage with the idea of the monster. Memphre lends his name to nicest bistro in town.
The owner of my bed and breakfast suggested that the myth was really a way to attract tourists, but added that it might not be necessary anymore given how much the community has to offer by way of performances and festivals and trails and foliage.
But Memphre is an interesting monster because he isn't a commercial monster. You can't buy a t-shirt with his name on it in America because Malloy would be able to sue the seller for $100,000. In all likelihood, you hadn't heard of him before you started reading this article.
If he turns out to be real, Malloy will likely serve a banquet of crow for all the haters in town. But if he is simply a stubborn notion, Memphre still says something about this place at the edge of two countries: The people here want hard evidence of their landscape's singularity.
Look close enough and you can see that it is there already. The dairy farms the border runs across and the woods it runs through and the lake it dives under are all pristine. There is either a monster in the lake or there isn't. It's a nice lake regardless.
CORRECTION: A previous version of this story stated that the lake is 39 acres large. It is 39 square miles large. We regret the error.

Lurking in the Depths of Lake Memphremagog

JOHN MAHONEY
on August 12 at 11:22 a.m. Patricia deBroin Fournier and her husband were boating on Lake Memphremagog, in the Quebec end of the international lake. They were still on their annual summer holidays.
Suddenly, some distance away the surface of the water became agitated. Ms. Fournier thought this strange because the rest of the lake was relatively calm and placid. She had the presence of mind to focus her video camera on the disturbed area.
In a recent e-mail she wrote:
It was not a natural-looking boat wake (multiple waves) but a single moving wave; it was also [in] a deep part of the lake. I have it all on tape and it was strange to see. I have been out on the lake since I was 10 and know all about the stories.
I have watched her very short video clip of the event a number of times and can report that, yes, something was out there that day.
Whatever it was -- and I certainly am not prepared to say it was the legendary monster of Lake Memphremagog -- appeared fairly long and narrow, disturbed a substantial amount of water, and part of whatever it was appeared briefly above the surface before disappearing.
On the video tape you can hear Ms. Fournier repeating as she continues to shoot: "This is weird, this is weird."
QUESTION: Is this video clip a hoax?
I don't think so.
QUESTION: Is Memphre for real?
I don't know. But Ms. Fournier videotaped something large that looked real on August 15.
And, on the following day:
I was surprised the next day in the bay below the monastery (St Benoit) -- the one to the left with the horses in the pasture and the lovely house -- to see waves coming at us in a V-pattern but not from anywhere! The waves were very strong and there seemed to be a force pushing the water forward.
It came quickly and just vanished within a couple of minutes. (No tape of this one) This too was a very calm day but the water in this area, although not close to shore, was not deep. I thought: Maybe some underwater seismic activity.
As soon as I can get additional still images pulled from the tape I will publish them for your inspection. Please keep in mind the video frame is quite small and the total percentage of the frame covered by the "monster" is tiny. That's why the still image is unsharp and grainy. I did a minimal amount of brightness and contrast enhancement in Adobe Photoshop, and applied a 100% unsharp mask to tighten the image. No retouching was done.
Take me to the monster pictures...
Many thanks to: Patricia de Broin Fournier for her report
Jacques Boisvert, founding president of the Societé internationale de dracontologie du lac Memphremagog for vetting the video tape before passing it on for publication.
Charlie & Linda Tetreault for acquiring the still images from the video clip.
Yvon Leclerc, directeur Institut international du paléozoïque Magazine "dialogue sientifique", for his measured presentation of the video stills. 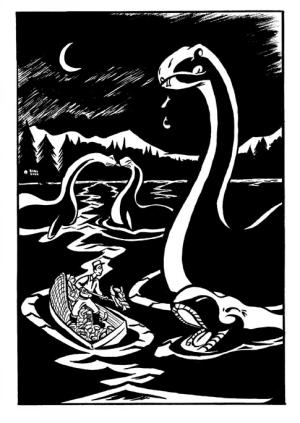 "Champ"-a pretty good translation of what witnesses are describing in Lake Champlain into graphic form. Fossils from the oldest known Antarctic “sea monster” have been found, a new study says.

The discovery of an 85-million-year-old plesiosaur has pushed back the marine reptile’s presence in Antarctica by 15 million years.

“The fragments we found don’t belong to any group registered on the continent before, which indicates a greater diversity of the plesiosaurs in Antarctica than previously suspected,” said team leader Alexander Kellner, of the National Museum of Brazil at the Federal University of Rio de Janeiro. [Antarctica would have been pretty cold, even then-DD]

Fragments of the vertebrae, head, and flippers suggest the newfound plesiosaur was 20 to 23 feet (6 to 7 meters) long. The bones weren’t, however, enough to identify the species of the plesiosaur.

Plesiosaurs roamed the seas worldwide between about 205 million to 65 million years ago, reaching the Southern Hemisphere by the mid-Jurassic. The animals had a range of different sizes and features, but mostly shared small heads, long necks, and big bodies.

“If the Loch Ness monster ever existed, this would be its best representation,” Kellner said.