Gambo And Ambon, Another Point of View

I had earlier ventured an opinion that the Sea Serpent sightings by the Captain of the Ambon (Evidently also later aboard the Java) were of a smaller and distinct form of Bernard Heuvelmans' Marine saurian and were the same as the creature which represented by the carcass of "Gambo" on the Atlantic side of Africa. To quote the original article:


This is another case where I had added different information to the Wikipedia article, which was subsequently removed. In this case I w 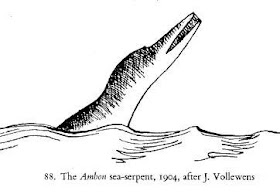 as not arguing for the identity of the carcass but drawing attention to the fact that the description was indeed close to two reports listed by Heuvelmans as possible 'Marine saurians' but off the coast of EAST Africa, at the end of the Red Sea.
These reports were sent along by the same Nederlandisch sea captain and both compared to a 'Smooth caiman.' The captain's own report was listed under the ship's name Ambon and the report dated to 22 October 1904. At the time, J. Vollewens was Third Officer and the Captain was G. A. Zeilanga. Vollewens later sent a report to A. C. Oudemans and he said then the head was raised above water for a little more than half a minute, was black above and white below. The head was raised about eight feet out of the water and both jaws were lined with many sharp-pointed teeth about 4 inches long. A fin was momentarily seen behind the head and could have been either a dorsal or a pectoral fin. The diameter of the neck where it met the water was about 2 1/2 feet. It was surrounded by several smaller animals like young sharks, probably travelling along with it to catch scraps. [Or else possibly the animal was feeding on the sharks]
A similar creature was sighted by the Java off Somaliland in 1906 and Vollewens also reported that one to Oudemans. (In The wake of the Sea-Serpents, pages 374-376)
Heuvelmans states in the text that it is probably an odd odontocete but that it could never be a type of beaked whale because of the many teeth in the jaws. However, in the tables in the back of the book, these reports are treated as Marine Saurians and they are so indicated on his map.
It would seem that the Ambon Sea Serpent was slightly larger than Gambo, possibly 20-25 feet long; and all speculations that this type of animal would be 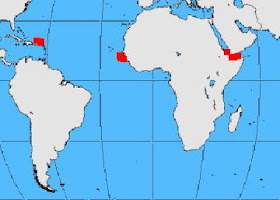 any sort of cetacean or crocodile would be mistaken. It is more likely a smaller form of the regular Marine Saurians, but there is no telling whether it would be the younger size of the same species or possibly a dwarfed variety. The colouring is also unlike the usual Marine Saurians. It cannot be a crocodile because the skin is smooth and it cannot be a cetacean because it has hind feet.
I include a map to indicate the carcass and the sightings. I also indicate (tenatively) that there might have been another corpse of this type found off Puerto Rico in 1964 according to information in Ivan Sanderson's files.
The sequel article was a presentation of the theory that the Gambo + Ambon creature was a small kind of short-necked plesiosaur, the opinion of Tyler Stone. And subsequently again Jay Cooney questioned that theory again and said that the short-necked Plesiosaur theory was not likely and that one or the other of the earlier theories was more likely correct.

Leaving that part aside for now, Jay also sent me the banner at the top of the page comparing the Ambon creature to a Mosasaur and suggesting it was merely a small but conventional Marine Saurian. I thought that was a possibly valid idea and asked to run the comparison on this blog.

BTW, two later amendments to the original article were that the term "Nederlandisch" was decidedly old-fashioned and liable to raise a few eyebrows these days, and that the Puerto Rico 1964 carcass was also possibly a small cetacean.
Anonymous at 01:54
Share